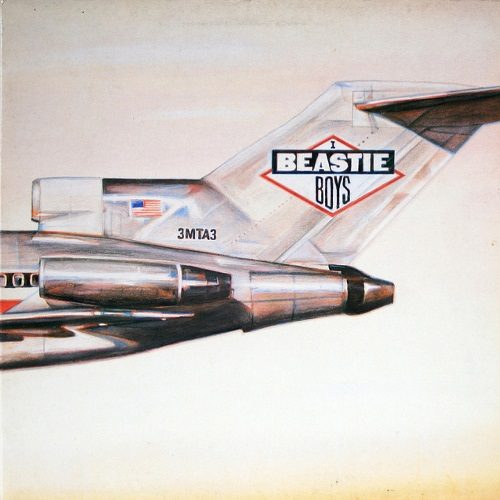 Jayson YoungFebruary 5, 2002
Back to the LabReview

They’re originators. Hell, these days they’re even music icons. They’re the Beastie Boys. And whether people want to acknowledge it or not, their debut album is one of the most important and influential hip-hop releases of all time. “Licensed to Ill” may have started out as little more than a joke, but it went on to change the face of rap music forever and solidified the Beasties’ place in history early on. And that is not opinion, kid. These are the facts.

Landing on the scene way back in 1986, “Licensed to Ill” was preceded by huge amounts of hype. The Beasties had already released two successful twelve-inch singles through fledgling Def Jam Records, some of the first releases ever on that imprint. They had also come off two successful tours: Run-D.M.C.’s groundbreaking Raising Hell Tour, and Madonna’s Like a Virgin Tour. By no means did these Boys show up out of nowhere. And when “Licensed” was finally released, it was an instant hit. It went platinum in just two months! Plus, this album has the distinction of being the first rap album EVER to hit number one on the Billboard charts. But there was one thing that REALLY set the Beasties apart from other rap groups at the time. The Beastie Boys were white. Forget that blond guy from Detroit, these guys were the first white MCs on the block. Everyone from Eminem to Mr. Eon to good ol’ Bubba Sparxxx owes something to these Boys.

So yeah, this album had some buzz around it early. But aside from all that, was the music itself any good? Could these three rich, white suburban boys rock like they bragged they could? The answer then was yes. The answer now is STILL yes, and that is a feat in itself. This is one of the few rap albums that can truly be considered “classic.”

Borrowing heavily from Run-D.M.C.’s style of hard rock riffs over even harder beats and then adding their own line-trading flavor to the mix, the Beastie Boys prove that a good formula never goes out of style. The big difference between these cats and Run-D.M.C., however, would be the fact that, unlike D.M.C. and Rev. Run, it is absolutely impossible to take anything that the Beasties say seriously. But they meant it to be that way. In fact, even to this day, the Beastie Boys will proudly admit that their early career was a joke that went way too far.

But lucky for us, this joke is one that’s very easy on the ears. You got three distinctive MCs with three distinctive styles: King Ad-Rock with his high-pitched whining, Mike D with his equally white-boy-sounding vocals, and MCA, the gritty-sounding voice that serves to round things out. Handling all the production is Rick Rubin himself, and most people will tell you that without him, this album would be nothing. Similar to De La Soul’s “3 Feet High and Rising…” and Prince Paul, that rumor will never go away. Rubin was indeed the mastermind behind the album, and he certainly brought out the best in the Boys, but he wasn’t the be-all end-all.

The album opens with the scratching and kick-ass drumbeats of “Rhymin’ and Stealin'”, a track about mutiny on the bounty and, um, rhymin’ and stealin’. As goofy as it sounds, I don’t think I’ve ever heard a pirate themed rap track done better than this. Too fucked up for you? Get used to it, because the bragging is just beginning. “The New Style” is next up, and it’s composed of some more scratching, heavy metal samples, and cocky, braggin’-ass B-Boys:

“Father to many, married to none
and in case you’re unaware, I carry a gun
Step into the party, the place is overpacked
Saw the kid at disco, homeboy shot him in the back
Man, I had to get a beeper ‘cuz my phone is tapped
You better keep your mouth shut because I’m fully strapped
I got money in the bank, I can still get high
That’s why your girlfriend thinks that I’m so fly”

Those scoundrels. See what I mean about not being able to take them seriously? But that doesn’t mean this isn’t good micsmanship. The way these boys trade lines, and even sometimes individual words, is almost unequaled by anyone. One of the tightest teams in all of hip-hop, these boys echo each other, finish each other’s sentences and play off one another to great effect. It can’t be conveyed in writing though â€“ you gotta hear it yourself (if there’s anyone out there who hasn’t yet).

Moving onto track 3, “She’s Crafty”, we hear… more hard rock samples and more tough-talking Beasties. And it’s the same business on “Posse in Effect.” You’d think this’d be getting tiresome by now, but that’s not the case. If it ain’t broke, then dammit, why try to fix the damn thing? Seriously, if you’re listening to “Licensed to Ill” up to this point and you aren’t at LEAST nodding your head (let alone fully wilin’ out…), you, my friend, are a stone-faced, cold-hearted villain.

“Slow Ride” and “Girls” break up the formula a bit. The former with a fresh sample of War’s “Lowrider” and the latter Ad-Rock’s “tribute” to the ladies. These two are followed up by THE single: “Fight For Your Right.” You know it. I know it. Most wouldn’t admit liking the damn thing if you paid them, but it was huge. It’s ironic though that this HEAVY METAL track was by far the biggest hit to come off this excellent RAP album.

After that, it’s hit after hit: “No Sleep Till Brooklyn”, “Paul Revere”, “Hold It Now, Hit It”, “Brass Monkey”, “Slow and Low”, and “Time to Get Ill”. Damn son, these are ALL classics! If you don’t own this album yet, go buy it right now. Don’t mind if you’re boys are gonna laugh at you. They don’t know what they’re missing. Go. I’ll be here when you come back. Go on. Okay, you back already? Good. You’re in for a treat. Just sit back, open your mind and let three little white boys take you on a ride. What you just purchased is 45 minutes of no bullshit, no skits, and not a single weak moment. If there’s one thing that can be said about the Beasties, it’s that they never give a half-assed effort on the whole album. And it shows. “Licensed to Ill” should be in every true head’s collection, no excuses. Classic shit. Own it.