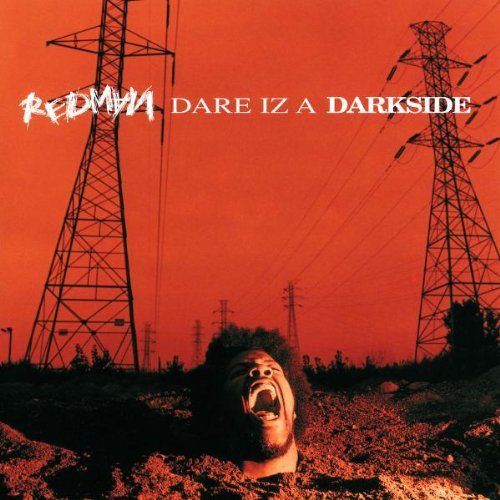 It should be little secret by now that the staff of RapReviews.com is enamored with the snotty-nosed notty-headed lyrical terror of Newark, NJ. Looking over the four prior reviews of Redman on this website, from “Whut? Thee Album” to “Malpractice”, none of his releases have ever scored less than eight out of ten overall. That leaves at last with “Dare Iz a Darkside”, perhaps the most obscure and UNAPPRECIATED of all the CD’s that Funk Doctor Spock has dropped on the unsuspecting public.

Following the phenomenal success of a debut album universally hailed as a P-Funked out hip-hop classic, the deck was already stacked against Reggie Noble right out the gate with this sophomore release. Despite that, Redman didn’t play it safe and stick with the same ol’ sound that would have made this LP a huge hit. Instead, this album literally lives up to the “Darkside” of it’s title with a sound that’s darker than a Hershey Special Dark bar. This is a funky album to be sure, but it’s not a light and bouncy funk – it’s gritty like the dirt under your fingernails that even Lava soap can’t get out.

Rockwilder’s “Noorotic” is a perfect example. Those of you who know his name from bouncy remixes for people like Destiny’s Child would be SHOCKED by this track; a thumping walking zombie of funk where Redman “rocks tracks like Van Halen” and is accompanied by a raw chorus of rap samples punctuated with “stay off his dick!” In his typical bravado, Mr. Noble proves with verse two with so many people wish they could rhyme or sound just like him:

“I’m seein a lot of happy copycat rappers
actin like they got asthma
They attackin me, they slowin they rhymes down; actually
They got factories with little dolls named after me
But it’s no question my funk segment leave the whole atmosphere pregnant
I take advantage of niggaz like I was molesterin
Newark, New Jersey’s what I represent.. ayyy-iyyyyy-iyyyy
My brain be zonin, I phoned home to E.T.’s home
and to hook me up with stash spots to put my chrome in”

If you’re having a hard time following all this, just wait for his trademark punchlines like “The bomb like Elway throw balls on John Madden.” Oh you didn’t know? We had that shit back in ’94 too, don’t think that it only came around when your Playstation 2 came out. The most hilarious part of this song though is the breakdown at just over three minutes, when Redman interrupts his own song for a sex break by saying, “Can any MC do this..” {*insert sounds of intercourse here*} “.. and come back on the mic? I THINK NOT!”

Is it any wonder then that the album’s first single “Rockafella” was a funked out self-produced Redman masterpiece accompanied by a music video whose backdrop is a carnival freak show? “On and on and it don’t quit, Redman rockin on to the funky shit,” echoes the chorus over and over, and listening to this song you can only help but nod your head to these HEAVY beats and rhymes in agreement:

“Droppin the flavor, stay Sky high like Pager
I’m magical like “Fantasia” on paper
“I Saw the Light” like Kraftwerk, of course
When the T L-A Rock shock the stuff, IT’S YOURS
TO YOUR DRAWERS!! Your record label got your staff gassed
thinkin you gonna sell two mill’ cakes real fast
But you flopped and your image choked like a Tec
Now WHO freakin style your ass gonna steal next?
Are there any more imitators in the house? THERE ARE NO
Bust like NBA Jams, and you can have Chicago”

Thus speaks the voice of undeniably egotistical confidence (that’s the MICHAEL JORDAN Chicago he’s spotting you) and with songs like these it’s well-earned. Still this album continues to be unrecognized in the pantheon of Redman releases, for reasons this writer truly fails to comprehend. Maybe the mood and tone of this album was just TOO dark for some people, even with singles like his upbeat follow-up track “Can’t Wait” – often best rembered for his finishing punchline, “Switchin speeds like Bruce Lee ridin a Fuji, in a movie.” You can’t help but smile as he turns to look at the audience like a director with his own camcorder and quips, “If you didn’t get it – laugh now.. AND THEN FIGURE THE SHIT OUT WHEN YOU GET HOME!” This kind of lighthearted track is the exception to the rule though. The trademark Redman humor is found throughout, but the tracks resonate with more stank than “Stankonia” on ridiculously pounding bass monsters like “Wuditlooklike” and the SUPER HEAVY duet “We Run N.Y.” with Hurricane G. Normally the latter artist could make Angie Martinez sound like Rakim by comparison, but she can do no wrong in tandem with a man who bigs up a generation of artists as hardcore as this track:

“Well um – let’s take a journey to hell and beyond
Where the bomb grows on palms, and bags labelled Cheech and Chong
The Jimi Hendrix of rap; I got an afro and bandana
Then I rock jams like Santana
I move MC’s like niggaz move ki’s Uptown
Red and Hurricane G, SO HOW YOU LIKE US NOW?!?!?!”

In writing this review, I was hoping that perhaps this was going to be the album that broke the mold for our website – a Reggie Noble release somebody on the staff DIDN’T love. Unfortunately that’s just not the case, because by making a stinky, filthy, dirty, nasty, BOOMING hip-hop album that’s so raw that it flew over the heads of even his hardcore fans, “Dare Iz a Darkside” may rate as the sleeper in his WHOLE catalogue. For those who just can’t live without a LITTLE more bounce in a Redman album, there are a few obligatory cuts like the “Tonight’s Da Nite (Remix)” and the mellowed out “Green Island” you can skip to, but the hardcore Redman fans will want to hear the inaugural Squad union of Red, Keith, and Erick on the pounding pianos of the epic “Cosmic Slop” and the verbal and musical terror of songs like “Journey Throo Da Darkside” – a song so bleak and dark even Reggie himself begs “somebody, turn on the lights” in the song’s introduction! You may know him as the smoked out rap comedian of “How High” and tons of miscelleaneous MTV specials, but this album truly proves that “Dare Iz a Darkside” of Reggie Noble – and THANK GOD FOR THAT!