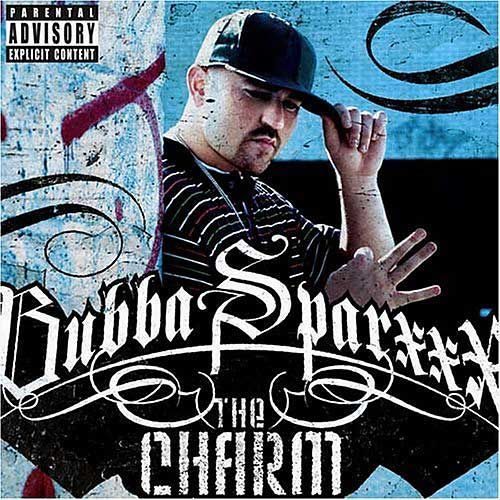 Bubba Sparxxx got off to a hot start back in 2001 with the release of “Dark Days, Bright Nights.” No one had heard of Warren Anderson Mathis before the song “Ugly” came along, but thanks to a fat bouncy Timbaland beat and a catchy chorus the LaGrange, Georgia native became one of the fastest rising stars in hip-hop. He had a lot to overcome to get respect – by his own admission he was a white boy from rural America who would be perceived as getting over BECAUSE of Timbaland and hadn’t paid enough dues to earn the right to rap. With his second LP “Deliverance” he answered those critics and overcame the dreaded sophomore jinx with another fine album. Bubba had the skills to pay the bills and it was clear he wasn’t going anywhere, but unfortunately for Bubba there was no crossover hit on the level of “Ugly” and album sales floundered.

A nearly three year hiatus from September of 2003 until April of 2006 has left a lot of people wondering where Bubba’s been and what he’s been up to. Adding to the intrigue is the fact that Bubba is no longer affiliated with Timbaland’s imprint Beat Club, having chosen on “The Charm” to align himself with Big Boi’s label Purple Ribbon. Does that mean that the producer who made Bubba and the best white rapper Timbaland ever discovered are quits with each other? Not really. In fact the underground single that floated around before this album’s release was another Timbaland banger called “Hey! (A Lil Gratitude).” True to form Bubba met the bouncy beat and brought the fire lyrically:

“I came to do two things, kick some ass
And drink some cold beer, and I’m almost out of beer
Looky here, be damned if every other year
He ain’t stumble back in, Bubba baby that’s him
I love me some me, and I don’t mind you
Shoot your moon dawg, good luck with what’chu tryin to do
Just do it over there, I feel some kind of way
Guess what I’m tryin to say is I ain’t got no time to play
I might go die today, I might just live forever
I done endured bein poor but bein rich is better
From that dirt road in LaGrange I done came
A long way, we can do this all day, HEY”

For better or worse though this is the only Timbaland produced track on “The Charm.” The “for better” is that Bubba Sparxxx and Timbaland together was starting to get just a little bit cliche, and by hooking up with Big Boi he’s got a natural in-road to getting some more Organized Noize beats on his album. They deliver on tracks that sound tailor made for OutKast, but Bubba gives him his own brand of Georgia flavor that’s a little different from the A-T-L. Notable tightness includes the up tempo “As the Rim Spins,” a darkly melodic beat for Bubba to triple time over on “The Otherside” also featuring Petey Pablo and Sleepy Brown, and the smooth and humorous sound mixed with cut’n’scratch on “Wonderful”:

“Everythang’s funny at first
‘Til I showed ’em how much bein country is worth
Just bought me a Dodge, a Hemi, gimme 20 new 20’s
I’m on day #3, I need some energy in me
I been in the city behavin like I’m still in the woods
Just a white boy livin life as trill as I should
Really good, if I say so myself
Might be a little pale, they can’t hate on my chest
Cause when I take the shirt off, and show this girth off
It’s all over but the tears if your hoe is up in here
Go and throw a couple beers on my tab tadpole”

It’s that unique rural slang and way of speaking that stood Bubba out from the crowd, and continues to do so today even today. The Mr. Collipark produced single “Ms. New Booty” has certainly won them over in the clubs and on the charts with the refrai “BOOTY BOOTY BOOTY BOOTY ROCKIN EVERYWHERE” and a guest appearance by the Ying Yang Twins. The beat and the sirens are electrifying and make you think something big’s about to happen, and when Bubba hits the mic, it’s on like Donkey Kong:

“Girl I don’t need you, but you need me
Take it off, let it flop, shake it freely
And I don’t tell stories, I let ’em tell theyself
And you ain’t gotta sell sex girl it sell itself
like nuttin else, yeah I’m a country boy
But that big city bottom fill me up with joy Ain’t life grand? Live it up Betty
Here go “The Whisper Song,” baby this is us ready
Put it on me, enthusiastically
Whatever it is that you do, you do it admirably
And I ain’t choose it, that thang chose me
It’s Bubba K and Ying Yang all the way in this thang, go!”

Admittedly Bubba’s not going to win any “Best Lyric Writing of 2006” awards for this song, but between him and the Ying Yang it’s not hard to see who comes off like a champ. Bubba’s flow is tight and he writes songs that fit the mood of the beat. Unfortunately that leads us to the “worse” part of the aforementioned “for better or worse” of splitting with Timbaland’s camp, because there are quite a few tracks on “The Charm” that are mediocre and Bubba can’t seem to find the lyrical energy to deliver on them. Mr. Collipark comes with an overly simplistic repeated melody on “Heat it Up” and one can tell from Bubba’s unethusiastic rap that he didn’t find anything hot about it:

“What it is? How are things?
My phone was on silent for a minute, now it rings
If you too cool, then I’m too cool
Let’s not boo-hoo, let’s just do what we do
Movin on, new song, new long
Sometimes you can move right and still do wrong
Ain’t nuttin fancy, just line up and run it
By the time you finished talkin ’bout it, I’ll be done done it”

Ugh, terrible. Did he honestly sit there and think “I’m gonna rhyme boo-hoo with too cool, that’s really tight” and believe it would work? No he didn’t. Clearly he put as much thought into the rhyme as Collipark did into the beat, which was NONE. Bubba still manages to just skirt the line above mediocre and avoid being outright awful on this song, but the Noize boys also fail him on “Represent” and a beat even Lil Jon would declare too repetitive on “Claremont Lounge,” with a chorus that’s outright irritating. In fact it isn’t until the middle third of this album that Bubba and his producers pick up the pace, and for people who listen to tracks in numerical order that might just be too little too late. Bubba Sparxx still comes out okay on the whole. Mr. DJ does him right on the swinging track “That Man,” and Sleepy Brown proves he’s the Nate Dogg of 2006 singing the hook. Big Boi flexes his production chops ably on the sly understated “Ain’t Life Grand,” and the biggest surprised of the album might be the smooth “Run Away” with a Jayson ‘Koko’ Bridges beat and guest vocals by Frankie J. It’s a bit more “Whitey Ford Sings the Blues” than Bubba Sparxxx usually goes for, but he leaves the singing to Everlast and straight raps on it which I do appreciate.

Overall something seems to have changed about Bubba Sparxxx in 2006 though and it isn’t just the beats. Maybe it’s because there are so many white country rappers now that he doesn’t stand out in the crowd the way he used to. Maybe in the three year hiatus after the dissapointing sales of “Deliverance” he lost a little faith in his rap. Whatever it may be there’s a noticeably muted tone to his delivery and a bit of his defiant “proud to be country” attitude has faded away. Bubba still has that potential and does come with some good tracks, but it’s a short album you can finish in under an hour that compared to his prior works sounds and feels vaguely unsatisfying.