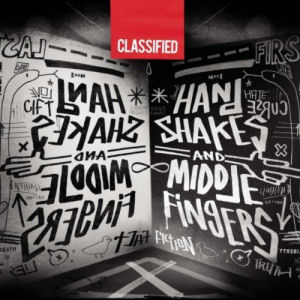 Artistic growth is a double edged sword. We can laud artists for their growth when they step out of their comfort zone or change their topic matter, but we can just as easily call them sell outs for the very same thing. That’s the tricky thing about artistic growth, it’s such a fickle, malleable concept it loses its meaning. Has Snoop ever experienced artistic growth? Is Kanye’s electro-pop experiment considered artistic growth? Do we really expect artists that live in their own celebrity bubble to grow as human beings? The last question is the one with most importance as growth as a person is the fuel that drives artistic growth. Classified serves as the perfect case study in the subject. Rewind to 2003’s “Trial and Error” and Tim Lavenz gave Classified props for his beats, but said all the kid ever did was battle rap. By 2011, both Flash and I had given props to Classified albums that do more than just brag and boast.

Far from a mere difference in interpretation as to what a “battle” rap is, the Classified you encounter in 2011 is far more evolved than the one Tim Lavenz met in 2003. That was eight years ago and a lot can happen in eight years. For artists in the limelight, those eight years may merely mean eight more rotations of the seasons and eight more rotations of the hot sound or producer of the year. For Classified, those eight years mean eight years of life lived and learned. Though I thought both “Self Explanatory” and “Hitch Hikin’ Music” reflected the maturity and growth Classified experienced as a person, “Handshakes and Middle Fingers” reinforces the idea that evolution, even the artistic kind, has no limits.

On the surface, there isn’t anything different in the way Classified approaches his craft in 2011. Dope self produced beats? Check. Heartfelt, honest lyrics? Check. The difference this go round lies more in the intangibles. Classified does nothing obvious or purposeful that screams out “growth,” but the album plays out in a way that reflects a newfound mindset. “Intro: Ups and Downs” is a three minute summary of what Classified has been up to since the last album full of more pain than glory. While the awards and recognition of his career are not lost on Classified, being an artist, trying to run a business, and trying to raise a family are things that are tough to juggle. “That Ain’t Classy” hits us next and is a song that is fit to be the lead single. It’s an upbeat, catchy track that could make any club jump. Classified uses the infectious beat to cleverly disguise a song about keeping true to his roots. “High Maintenance” follows and is as mature as a song about smoking weed can be. Rather than approach the subject unapologetically or try to espouse the benefits of weed, Classified simply admits he’s addicted, he thinks about quitting everyday, but you know what? He’ll probably keep doing it everyday, because he likes it, it’s hard to quit, and it helps him relax. This honest and reflective mindset is what permeates throughout the album and what really makes it so refreshing.

Classified’s self-awareness doesn’t mean he has changed his approach to making music. Every song is ear pleasing and “Danger Bay” is no different. Pianos cascade rapidly during his verses until they explode into a sea of blaring horns that grab your attention. The song is epic and it reflects the urgency in Classified’s lyrics:

“It goes, Welcome to Danger Bay
Where everybody acts up in the strangest ways
In this place when it pours it rains for days
Ain’t no love left, only the hate remains
Walk with me, ‘scape or face the flames
Type of place you don’t know your neighbor’s name
And in Danger Bay? There ain’t no heroes
Nah, the only want to kill em and beat a villain like Scarecrow
It’s a place where the athletes and entertainers
Are more valued than the doctors and educators
And they all lost faith in the lord
And the ones who haven’t they don’t go to church, they go to war”

Classified even includes a good old fashioned “battle” rap with “Run With Me” as he advises his adversaries to “run for the hills” but still manages to concede that he’s “an emcee, I’m supposed to act like I’m the illest, and I know I ain’t the best, but I’m comfortable where my skill is.” As great as a battle rapper Classified can be, “Run With Me” is easily overshadowed by the rest of the album’s much more contemplative nature. “Stay Cool” extols the benefits of keeping calm and approaching life in laid back matter. “Young Soul” reflects on how life changes as we grow older and how we have to adapt and stay young at heart. Even “The Hangover,” which on the surface is simply a song about drinking too much, hints at recognizing that everything in life has consequences.

There really isn’t a complaint to be had from this critic for “Hand Shakes and Middle Fingers.” Granted, it’s been six years since I was first introduced to the “Boy-Cott-In The Industry” and I too have experienced just as much change and evolution as Classified in those six years. So I’m willing to admit that not everyone is going to feel this album as much as I do. I’m getting older too and I can’t stanky legg like these teenagers do, at least not without stretching. That said, Classified is proof positive that hip-hop can be the soundtrack to your life no matter the age, time or place.