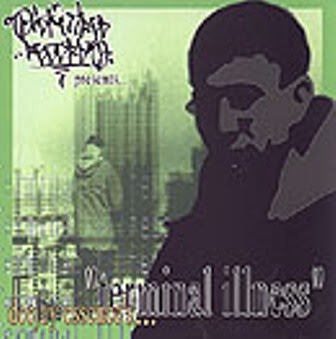 “Dark skies and cold weather’s all I see in Pittsburgh,” lamented J. Sands on last year’s acclaimed Lone Catalysts album. But bad weather didn’t prevent him and his partner J. Rawls from crafting some soul-soothing, day-brightening hip-hop. The city of Pittsburgh is also what “Terminal Illness” by Deejay Essence focuses on. “The idea,” reads the promo sheet, “was to put out an album with Pittsburgh artists, alongside nationally recognized acts, so that the city’s artist could get some of the respect they deserve.”

Sounds fair enough to me. And so we got Soulheir the manCHILD (Mars ILL, Atlanta), Virtuoso (Boston), Prevail (Swollen Members, Vancouver) and Bishop I, JFK, Sleep and Pale Soul (Oldominion, Portland/Seattle) dropping by and saying hello. It’s quite common for local DJ’s to invite rappers from other cities to their mix shows or their mix tapes, not only to promote themselves, but also, in a way, to pay respects to the city they’re currently staying at. That definitely makes sense. If in the process it serves to give local MC’s exposure, I’m all the more for it.

So what do the Pittsburgh representatives have to offer? Noodles sets the tone (“this is it now, we makin’ it clear, we right here / them kids from underground about to come upstairs”) over the “T.O.N.Y.” beat, eating up competition with the hunger of those dwelling in the ground under, then later comes back for seconds with a nice idea for a battle track: as he describes a school bully, it becomes evident that he’s talking about himself, in the end even threatening to wedgie you right now and laughing at the fact that his kids “are now beatin’ up your kids.”

Ambush the Animated teams up twice with his partner Dos Noun from the Deadly Scribes Crew. The second time around they serve us with only a short battling segment, but before that they really give it their best shot – if this is indeed an exclusive (unfortunately Deejay Essence only lists who performs, not what they’re performing). Far from a freestyle, track number 4 is a mind-bending, metaphorical trip through time and space, peaking early with the following entrance:

“Dos Noun, God’s answer to lyrics, heaven-sent
smack statues till they crack tears from wet cement
fuck black holes, ejaculate milky ways
stars are sperm cells shooting from my silky sprays
till they fertizile astroids and planets to find
It’s been said, existence is a bitch and she’s mine
nothingness gives birth to something I founded
Martians modeled monoliths as monuments to my phallus”

Black Sun (of the Zoo Crew) takes it a little easier with his weed-induced lyricism but still shows insight that goes beyond what meets his blootshot eyes:

“I stay high, I won’t try to deny
yo, that’s like pigs tryin’ to fly
or goin’ to Burger King and only buyin’ a fry
But my 3rd eye in the sky is higher than high
I can see it all, see the rise, see the fall
Claim you got game but you can’t see the ball
you still little league, go puff a little weed
then go chase the rainbow and plant Skittles seeds
Battle rhymes classic like Ali vs. Foreman
freestyle is worth more than the first Jordans”

Caleesh makes his name known, J. Sands solidifies his, and Strict Flow turn to hip-hop heads far and near for sympathy:

“If you a music lover and never keep it undercover
if you feelin’ what I utter, brother, this is for you
If you fall on hard times and gotta turn to hard rhymes
just to refresh your mind, then this is for you
It’s for the young bucks, all the Strict Flow fans
that don’t give a fuck the teacher said no discmans
On foreign and familiar land, they diggin’ it
but right here’s a special shout for all of those that’s livin’ it”

My only gripe with this CD would be that, in regards to its goal (to give Pittsburgh talent exposure), this is only the first basic step towards broader recognition. “Terminal Illness” flows well for a DJ project, it’s got movie snippets, scratches, instrumentals that aren’t overexposed and holds well together, but it’s really just that, a mix CD. The next step would be to gather all these Pittsburgh MC’s, with or without outside guests, and let them present their best, their latest cuts. Tracks complete with choruses and concepts. Because what I heard over the net from the likes of Strict Flow, Rook & Bishop, Grand Buffet and Caleesh can definitely hold up to any bubbling indie scene.