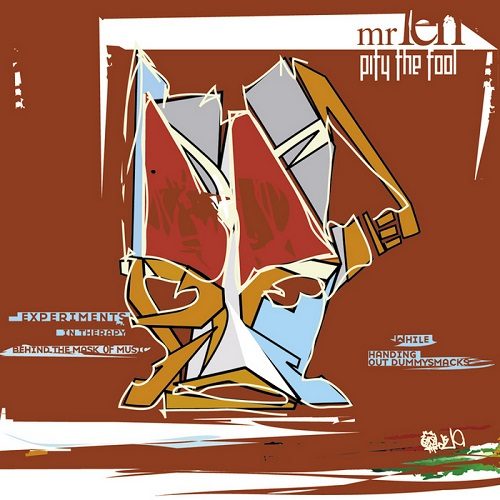 The creative force that was Company Flow was obviously not going to be held back by the minor stumbling block of the group in question actually splitting up. El-P has channelled his energy into his Def Jux label, Big Juss has released an album entitled “Plantation Rhymes,” so what to expect of the musical maestro DJ Mr. Len? A new album of course, entitled “Pity the Fool.”

The album is a pretty good one, no masterpiece but a solid effort for Mr. Len going solo. There’s only one completely wack track (metal fans might like it but alas not I), one track that’s pure genius, and the rest falls somewhere in between these two extremes. An example is the song “Taco Day,” which could in some ways be compared to De La Soul’s classic gem “Millie Pulled a Pistol on Santa.” While it does fall a little short of that particularly sublime piece of De La wisdom, it is in the same vein. Jean Grae she does a fantastic job on the rhyme here. Over nine minutes she charts the fall of a schoolgirl who changes from “the most popular girl in town” into a murderer who shoots her family and school friends. The beat is slow and very much secondary to the mic control of the MC. She dissects the life of a middle class family, from the seemingly successful and stable parents to the sexually abusive grandfather. She even caps her own father in the song:

“He tried to tackle me, so I jabbed him in the abdomen
Jumped, flipped, turned and stabbed him in the back again
And when he fell to the floor I stopped, heard a loud bang and a cough
Walked into the living room and Grandpa stood; gripping a sawed-off”

It’s fairly chilling stuff. “This Morning” featuring Juggaknots sees Breezy Brewin and company rhyme sickly over a subdued and dirty beat. With some fierce scratching courtesy of Mr. Len himself, it sounds like vintage Company Flow. “Get Loose” has Massinfluence rhyming over an extra harsh yet nicely funky beat. Jean Grae pops up again on “The Hurt” with Murs and brags about being like “Shante Roxanne” and how “the only way I like it is Raw.” There is an eerie, horror-movie type piano sample and dry drums; the overall effect is one of stylish claustrophobia.

Q-Unique of The Arsonists features on “Straight” and uses a far-away sound like he’s rhyming over a phone. It’s a nailing-of-colours-to-mast type track with Q-Unique declaring that he and Mr. Len, along with Company Flow and The Arsonists, are “straight up.” It’s a brave song considering the effect used on the rapping but I’m not entirely convinced it works. This album has plenty of surprises though – even Chubb Rock comess in later to drop some crazy science with Mr. Live over a bold beat. This time out, he pledges to stick around for a while:

“The question-Where’ve you been?
Is your phlegm still acidic?
…
Support the cat?
Others thought I was gone: never that”

The worst track was clearly “Force Fed” with Agents of Man. It is a metal style song, though blessedly short. The track features awful shouted vocals and doesn’t really fit the vibe of the album’s harcore underground aesthetic. Overall though the album is pleasantly varied, stays true to the experimental roots of Company Flow and makes a good listen. This album may not be in the class of “Funcrusher Plus” but is a worthy addition to the record collection of any underground head.