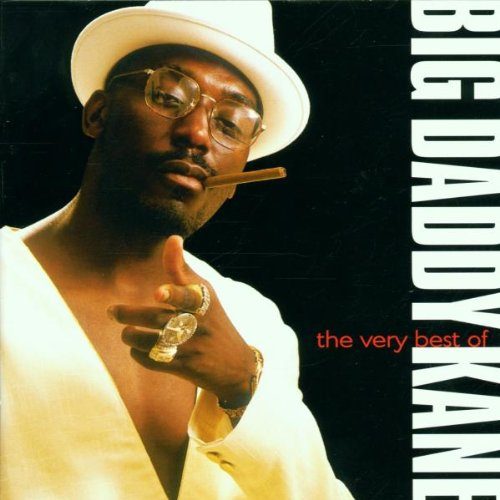 “Rap rhyme minister; some say sinister
Non-stoppin the groove until when it’s
the climax, and I max, relax and chill
Have a break from a take of me actin ill
Brain cells are lit, ideas start to hit
Next the formation of words that fit
At the table I sit, makin it legit
And when my pen hits the paper – awwww shit!” -> “Ain’t No Half-Steppin'”

If you’re reading this right now and asking “Who is Big Daddy Kane?” then you’re EXACTLY the rap fan that Rhino Records had in mind with this compilation. Some of you reading this who don’t know Kane’s legacy may have glimpsed a small part of his impact from VH-1’s recent special about hip-hop and sex. Video and audio clips of his smash hit “Smooth Operator” were shown, but unfortunately this report on his career focused mostly on his foibles as an entertainer, including appearing in Madonna’s “Sex” book and posing for a spread in Playgirl magazine. Kane unquestionably had sex appeal to his female (and perhaps even male) fans, but the MC who was always cuting edge in rhyme-writing and lyrical flow was slightly ahead of his time in his exploitation of these assets. To the eyes of those protecting rap’s heritage from being co-opted and diluted, Kane was a “sellout” willing to trade on his good looks for mainstream appeal. The increasing appeal of hip-hop to non-urban fanbases around this time seemed only to confirm their worst fears, and the man once beloved for songs like “Young, Gifted and Black” was labelled an Oreo and (very unfairly) kicked to the curb.

“When I’m cruisin in my Volvo, cops harass me
They never ride past me, they hound me like Lassie
Wantin to give me a summons or a ticket
Huh, I got a place for them to stick it (kick it)
They can’t understand to see a black man
Drivin a car that costs twenty-five grand
The first thing they say is ‘Where’d you steal her?’
And then they assume that I’m a drug dealer
Huh, that just makes me wanna laugh
Cause now I’m a star and your son got my autograph” –> “Another Victory”

Any rapper with Kane’s gifts deserves far better than that. As a lyricist his writing skills were par or above to any of his peers back in the day. In the mid-90’s the question was posed on wax, “Who’s the best MC – Biggie, Jay-Z or Nas?” In the golden era though, the appropriate question for New York’s hip-hop community would have been, “Who’s the best MC – Kane, Chuck or Ra?” Kane used this formidable talent in a variety of ways. He wrote about his afrocentric pride on “Word to the Mother(land),” kicked it just for fun on songs like “Just Rhymin’ With Biz” (for whom he was also a part-time ghostwriter), or dismissed inferior competition on ferocious songs like the Prince Paul produced “It’s Hard Being the Kane”:

“As I break MC’s like a lumberjack
Ain’t no comin back, you can’t get none of that
I’m not the type of MC to be merciful
So if your name ain’t Jermaine take it personal
Cause like a vigilante I’m gonna kill off any
sucker MC that tries to withstand me
With the mic in my hand I start flowin then
all competition flee and start goin in
the other direction, run for protection
Cause I can burn an MC like an erection”

It’s easy to fall short of platitudes to describe MC’s like Big Daddy Kane. The “Smooth” in “Smooth Operator” refers not just to his attitude, but for the professional command of the microphone his golden vocal tones embodied. For those not lucky enough to grow up in the late 80’s or experience the songs first-hand, the awe of hearing songs like “Raw” and “Set it Off” for the first time just can’t be described. On the latter an extremely confidant Kane quipped, “I can sneeze sniffle and cough; e-e-even if I stutter I will still come off!” Rappers have been biting that line for over a decade now, and very few of them ever bother to acknowledge it. In fact if you’re a long-term hip-hop fan who for some ungodly reason has never been exposed to Kane before now, listening to this album will be quite the eye-opener. Not only are there hundreds of Kane lines and rhymes that have been scratched by DJ’s for other rapper’s hooks, there are an infinite number of rap’s greatest lines that you’ll suddenly realize you already know from modern day rappers re-using them. Here’s a comparison: it’s the same reaction I get from listening to Jermaine Dupri’s “Welcome to Atlanta” and then hearing Whodini’s classic rap “Five Minutes of Funk.”

Not many reviews merit being opened with a quote instead of an introductory paragraph, but if ever a rapper has earned that right and respect the legend Big Daddy Kane cerrainly has. If this album has a downside it’s that it features almost no Kane material after his fourth, and there are seven total. Most insulting is that on the otherwise excellent “Looks Like a Job For…” Rhino chose to include the album’s sappy R&B crossover song, “Very Special.” It was precisely because of songs like this that Kane came to be resented by rap’s hardcore elite, even though that album featured some of his best production and most powerful raps, from “The Beef is On” to “Stop Shammin’.” Although “Daddy’s Home” and “Veteranz Day” were both overlooked by even hardcore Kane fans, including one song from each would have been a nice way to acknowledge that Kane was still recording all throughout the 90’s and didn’t just vanish because hip-hop ignored him. It’s nice to see the unreleased “Give a Demonstration” featuring Big Scoob included on this CD, but if more material of this quality exists more of it should have been added. Overall this album illustrates to the know-nots why even punchline rapper Thirstin Howl III would say, “Strong – like the contribution to rap Kane gave,” on his song “Brooklyn Hard Rock.” Without Big Daddy, rap would never have reached the pinnacle of success it has today, and he paid a high price for his hard work. If you’re not already a fan, give the man his due and go pick up this CD, and a copy of “Long Live the Kane” while you’re at it.