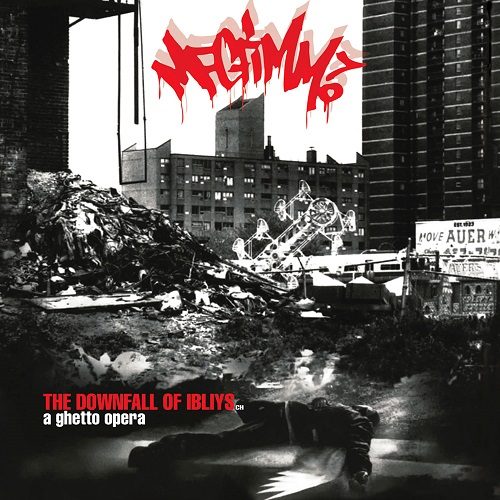 MF Grimm :: The Downfall of Ibliys

There are two possible golden eras of rap, which vary based on who you speak to: the stripped down beauty of the mid-80s and the accessible complexity of the early 90s. Clipse, particularly with the raw-like-sushi “Grindin’,” harks back to the first era. MF Grimm’s latest, “The Downfall of Ibliys: A Ghetto Opera,” successfully recalls upon the second. While it’s impossible to top classic shit from that time, his 17-cut album sounds as if De La and ATCQ were trapped in the Booga Basement with Fugee-era Wyclef (sans his guitar).

That might not be totally accurate, since the beats are looped tighter than Common’s knit hats. The producers, ranging from Count Bass-D to Rob A to Metal Fingers are more aspiring DJ Premiers than bouncy Jay Dees or soulful Kanye Wests. And, like Guru, the minimal beats are used to emphasize MF Grimm’s words. It’s a good thing that the beats don’t get too intricate since Grimm is retelling the already complex myth of Ibliys, an angel who got his wings taken away, a la Icarus, for not keeping faith in the higher power. It’s nice to feel a coherent theme in the album as opposed to 45 minutes of just someone shouting random shit into a mic.

Let’s peep “Life and Death,” which is where the story really begins. Heads might mistake this jazzy cut for a backpack version of Nelly’s “Dilemma,” but MF Grimm drops more symbolism than Jung:

“My name is Life, Lord, her never do me wrong
She was the best, though, she was a beautiful song
A schoolgirl, Master of Biology
Taught me everything, she holla holla at me
Beyond visual, totally internal
Trees, bees, birds, words
Verbs, nouns, took walks in the park
She was sweet and we always hung out
Until I met Death, she took the last breath of me
I met her through her cousin Sleep
To the left, to the right, she went both ways
Yes, chasing her was Chasing Amy
Took me to the edge, told me jump with her
I was hypnotized, so I jumped with her
Cuz I wanted her, confronted her
Between the sheets I messed with her
Life’s paging me, want me to mess with her
Don’t feel like being stressed with her
She wants to walk in the park, I want to run in the streets
I’m acting real cold, she’s giving off heat
She rather that I get a diploma
I go check out my homegirl Coma”

The songs themselves add to the overall theme, but they also have themes of their own, making the album layered like deep lasagna. The “love” song “Yes You Are (Its Only A Movie),” is about Mary — yes, Jesus’s mom — while the following cut, “I.B.’s,” is an open letter of an inmate asking his girl to stay faithful. And the double song after that, “To All My Comrades”/”Howl,” will do a Training Day on your ass and either scare the shit out of you… or make you want to go out and kill. Are you a wolf or a sheep, indeed.

There are only three guests on “Ibliys,” Count Bass-D, Megalon and MF Doom, but their appearances are more than noteworthy. “Foolish,” featuring Megalon and MF Doom, will have you smiling and laughing: Smiling at how they can pull a cypher off a chopped-up Anita Baker sample and laughing at the hilarious razor-sharp lyrics. MF Doom kills the Lite-FM beat:

“Big up! The jig is up! Swig up
Chop a nigga up, but first have him schedule a pick up
If you ask me, they all just a bunch of sick pups
Always seem to repeat the same stuff like hiccups
Nowadays the game is all bugged out
Phony like back when Hammer tried to come thugged out
Stop it, we pull fouls like carpet
Out from under the feet of the clowns that pop shit
Nasty like spit your verse and go gargle
Don’t fit no type of profile psychological
Any last words? Time’s up like Boggle
The supervillian, run ’em like Hamburgler, ‘Roggle roggle’
Another one asked him ‘Could I hold your microphone?’
He said ‘Sorry my brother, you gots to get your own'”

Punchlines and punchy beats keep the album from getting too heavy, though you definitely will feel like your brain is working overtime while connecting the lyrics. Like “De La Soul Is Dead,” “Ibliys” will require more than a few listens to “get it.” Don’t worry: you’ll be more than happy to listen again when the CD stops.