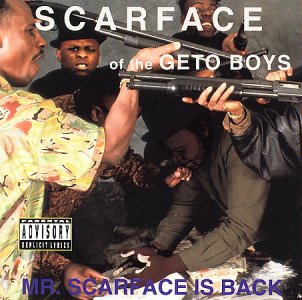 Scarface :: Mr. Scarface Is Back

Juice Crew or BDP? ‘Pac or Biggie? Jay-Z or Nas? As hip-hoppers, we live for these debates. One of the hottest at the moment is the claim for “King of the South”. The primary contenders? Lil’ Flip and T.I. Verbal jabs (and even physical ones) have been thrown and the drama has escalated, attracting a bloodthirsty audience. Fans have chosen sides, either aligning with the Rubber Band Man’s camp or taking arms alongside Houston’s notorious Leprechaun.

Lost amid the extravagant boasting, mean-mugging, and media-juiced publicity surrounding these two artists are those who have gone about their business in a quieter, equally effective way. In this category: Brad Jordan, better known as Scarface. Making his name as the lead man for the famed Geto Boys, the crew pioneered the entire Southern gangsta movement. ‘Face has since branched off into a sparkling solo career that has spanned fifteen years, eight albums, and a gig as president of Def Jam South. It all started here with 1991’s “Mr. Scarface is Back”.

‘Face comes out swinging with “Mr. Scarface”. Over drums and looped keys courtesy of the Rap-A-Lot in-house beatsmiths (whose richly-layered sampling techniques grace the entire album), he spits an opening braggadocio verse before diving into his trademark style with two verses of pure storytelling:

“I made a nut as she fell to the floor
I heard a knock on the front door
I grabbed the twelve gauge from the bed head
‘Who is it?’ (‘Fred’)
‘What?! Who the fuck is Fred?’ I stood by the door
By that time someone jumped in the window
Now what the fuck was I to do?
The bitch packed a twenty-two
Hit him in his head, there she laid him
The nigga standin’ by the door, I sprayed him
And headed for the back
I seen that same old brown Cadillac
It kinda fucked me up at first
Cause the nigga that drove that Caddy rode away in a hearse
I opened up fire on the ride, G
Who I was shootin’ for was standin’ right behind me
I had a double barrel pointed at my ass
Could this be the end of Mr. Brad?”

“The Pimp” is one of the more disappointing, unimaginative tracks on the album. The album recovers with “Born Killer” which boils with a speedy beat and hyper horns. Scarface unleashes another murder narrative:

“My momma did her part
But it ain’t her fault that I was born with out a heart
In other words I’m heartless, duke
I don’t love me, how the fuck I’ma love you?
That’s right, you guessed it
I’m legally insane, marked manic depressive
I’m takin’ all types of medication
To keep me out the mood of premeditatin’
Yo, the longer I’m alone is worse
I’m havin’ thoughts of killin’ me, but I’m killin’ you first”

“Murder by Reason of Insanity” continues the lyrical barrage, exposing a tale of revenge:

“Later on that day I heard gunshots
I’m watching niggas running (‘Aiyo, that nigga got shot!’)
Ran to the corner, ‘Yo, what happened my brother?’
He just laid there shakin’ and bleedin’ like a muthafucka
God damn! ‘Who would let that off to him?’
(‘Some niggas from your hood triple-crossed him’)
‘Get your shit together, we’re headed for the Village
I think it’s time to pay them hoes a little visit’
Them niggas don’t understand me
It’s gonna be a murder, my reason: insanity”

The uptempo “Your Ass Got Took” lists examples of times you, the listener, have been taken advantage of, just in case you didn’t already realize it yourself. Either way, he gleefully rubs it in your face. The brilliantly disturbing “Diary of a Madman” digs deep and unearths our host’s inner demons:

“Dear Diary, I’m having a little problem
I can’t make it by myself, maybe you can help me solve ’em
I’m confused and I don’t know what to do
I’m hoping you can help me cause there’s no one else to talk to
I want to die, but it ain’t for me
I try to talk to my dad, but my old man ignores me
He says I’m delirious
And I drink too much, so he doesn’t take me serious
But little does he know I’m really losing it
I got a head, but ain’t no screws in it
I be thinking deep
That’s one of the reasons at night I can’t sleep
I thought it would change when I was older
But even now I’m still peeping over my shoulder”

On “Body Snatchers” the “homicidal maniac with suicidal tendencies” divulges an experience in a mental ward and the subsequent escape:

“The judge will try to sentence me to 10, I never blink
He’ll change and say I’m psycho and just send me to a shrink
20 months I’m in seclusion and my head’s filled with confusion
Have a feelin’ that I’m losing, so I’ve come to this conclusion
I gotta get the fuck out, I can’t take it anymore
Got a watchman at his post so I rushed him to the floor”

The slow-cooking “Money and the Power” outlines the many perks of having a large money stash. “P D Roll ‘Em” boldly warns those testing the limits of the street code to stay in line; otherwise, expect to see some hot lead coming your way. The jazzy “Good Girl Gone Bad” steps listeners through a series of events following a bad drug deal. Verse two tells of a highway chase and shootout that is so clearly described that you can literally picture the action unfolding, similar to the feeling you get reading a well-written novel. He doesn’t just regurgitate a story, he tells it as if you’re standing next to him.

The pinnacle of the album arrives with “A Minute to Pray and a Second to Die” where ‘Face describes a murder from the perspective of multiple characters. The killer, the victim, friends, parents, and bystanders all have their stories told in intertwined snippets, including background information and subsequent actions. The most impressive part is that he bounces around from character to character in a way that does not confuse the listener while allowing the story itself to stay fluid and cohesive. It really is something to hear. “I’m Dead” is a brief, stark closing to the album along the lines of “The Sixth Sense”, where ‘Face walks through his normal day before realizing he’s dead.

“Mr. Scarface Is Back” is a snapshot of a young, hungry, and raw Scarface. Over time, he’s matured as an artist, expanding the scope of his topics, enhancing his word selection, and sanding off his delivery. I question other critics who claim this is his greatest album. How is that possible when we’ve seen so much lyrical growth from Houston’s finest? Say what you will, “The Fix” is one of the most under-appreciated releases in the young millennium. Despite this, MSIB is a hip-hop milestone because the vivid, uncompromising storytelling made it one of the first of its kind. This release was a profound, “step your rap game up” proclamation to the industry. No lazy shortcuts here, ‘Face guides the listener through each scene breath-by-breath. He proved that an emcee could be hardcore gangsta and still be creative and intelligent. So bicker all you want about the King of the South. The position’s already taken.