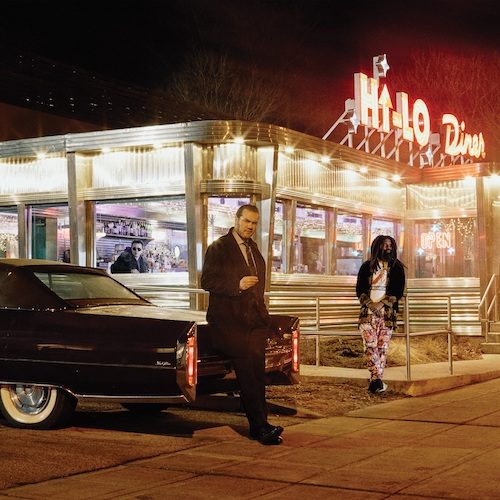 Time is a contradictory and confusing construct. It either feels like it’s moving slowly precisely at the moment you need things to happen quickly or it flies by to the point you wonder where it all went so fast. In truth neither of those things is happening. Time’s movement is a matter of perception. It marches as the same inexorable pace regardless of whether we think it moves too fast or too slowly. It has been over a decade since MURS & Slug released “Felt 3: A Tribute to Rosie Perez” and yet from my perspective it seems like that was only yesterday. Great albums are described by critics as “timeless” as a way to evoke the notion they are superior to the sea of sharks they swim in, bigger and stronger than all of the competition, but those superlatives don’t stop the years passing by.

“I only do it for my city and my kids” quips MURS on “Never’s Enough,” the opening track of “Felt 4 U” and a mission statement for why they reunited and returned after so long. “Here you come, wit’cha nose turned up/Wit’cha head in the clouds, like you better than us/(Don’t really matter how much you got now)/Leveling up, but it’s never enough.” The choice of punctuation in the song’s name, like everything this duo does under the Felt umbrella, is done with purposeful intention. Fans of the group can never get enough of the music, but there will never be enough to be enough, so NEVER’S enough. “Felt 4 U” lets you know right away that no matter what you think of both artists individually let alone collectively, the only people they have to satisfy with the quality of their work is themselves.

The irony of such a self-centered perspective is that it liberates the collaborators to create beautiful art. When you’ve already accepted that you can’t please all of the people all of the time, you feel free to “keep it funky like the marrow in the bone” as MURS says on “Don’t Do Me Like That.” The less time they spend thinking about what Felt means to other people, the more time they have to create music that DOES resonate with listeners. Instead of fighting with time, “Trees” finds time becoming an excuse to drop an X-Clan easter egg. “Vanglorious! +Black watch+ on my wrist/If you don’t know the time, I’ma tell you with my fist.” That reference may be way too obscure for the century’s third decade — and Felt just don’t give a damn.

“I just want a backyard so I can grow a couple of trees/I’m not a rap star, I’m just a fucker that’s free” says Slug on “Freeze Tag.” Self-deprecating humor is part of the mix, but so is Slug’s long time collaborator Ant, who produced the entirety of “Felt 2.” It’s not an attempt to time travel back to their past efforts though. “Underwater” featuring Blimes is very future forward — a slinky, sultry and sexual song. “The purest love be the craziest/When I’m reminiscing over you, that’s my favorite shit” raps MURS about his other, while Slug tributes his own by saying “For real, I’m like whatever/I love this house that we’ve built together/I’m trying to holla at the South/Momma won’tcha come and put your flower in my mouth?” That may be the single best euphemism for oral sex to ever be committed to record.

If MURS and Slug aren’t enough of a supergroup as Felt, they combine together with Aesop Rock and The Grouch for some Avengers Assemble action on “Hologram.” MURS doesn’t pull punches on how fed up he is with hip-hop hypocrisy. “Double down on these conscious rapping millionaires/Fighting for the rights of civilians like they really care/Beware of these turntable turncoats/Lighting up they blunts while the GOP burn votes.” If you had any doubts of his political leanings, the diss “orange faced clown” is pretty clearly about the man who thinks he belongs on Mount Rushmore. I’m sure that outrages right-wing pundits and Breitbart News writers, but how many of them are listening to “Felt 4 U” anyway? I’ll estimate ZERO.

Time comes full circle by the time “Borboleta” ends, because 40 minutes feels like both an incredibly long and satisfying surprise release, and simultaneously not as much of Felt as you’d want to hear in one sitting. It’s never enough is it? As the days peel away from the calendar at a COVID-19 speed, we can at least pass the time indoors with the return of a union we’d all love to see touring. I’ve been fortunate enough to see MURS perform at least once, but once there’s a vaccine I think a full set of Felt songs from the entire catalogue would be incredible. Parking is always a hassle, clubs are always overcrowded, drinks are overpriced and somebody’s always got to start a fight for no reason when people are trying to have a good time. It would all be worth it to hear any song from this set live, and that’s the funny thing about time — it’s all about the memories you made along the way. “Felt 4 U” makes some damn good ones.