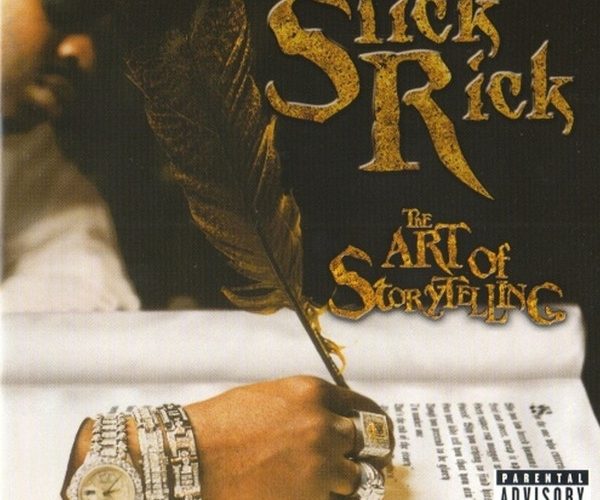 Slick Rick :: The Art of Storytelling

Slick Rick’s place in hip hop legend was already secure before this album was ever released. The Great Adventures of Slick Rick remains to this day one of the true masterpieces of the Golden Age of hip hop, and most knowledgeable hip hop heads will rate it high on their list of Top 10 Albums Ever. No matter what happened afterwards, Rick would’ve been remember. But after his strange and difficult ordeal, The Art Of Storytelling proved that Rick is one of the true masters of the artform. It is sadly ironic that one of the rappers with the most fun-loving and UN-gangsta personas nearly had his career permanently shut down when found himself serving time in prison for attempted murder. The Ruler recorded two albums worth of (understandably) rushed and half hearted material in a two week period before his incarceration. The two albums (The Ruler’s Back and Behind Bars) found Rick spitting light speed raps, a style that he pulled off well but was a far cry from the arrogant, nonchalant rhymes that people loved him for. The post-incarceration albums subsequently failed, both in terms of quality and sales numbers. It seemed that Rick was destined to be a “Where Are They Now?” special.

After his release from prison in 1996, Russell Simmons was reluctant to invest in another Slick Rick album, based on how drastically the hip hop scene had changed since Rick’s incarceration. However, after well received guest spots for several high profile artists including Aaliyah, Montell Jordan, and Jermaine Dupri, Mr. Simmons decided to give the album a green light. The fact that this album was on Def Jam certainly helped; while other old schoolers such as Big Daddy Kane and Rakim attempted to make comebacks on labels not noted for their hip hop rosters with mixed results, largely due to lack of any real support from their labels. It seemed as though Lyor Cohen and company were not going to let Rick fail. While the producers on the album weren’t especially high profile with the exception of a lone Trackmasters cut, Def Jam made sure that there was a list of big name guests such as Big Boi, Nas, Raekwon, Snoop and to a lesser extent Canibus. These guests were well selected; not only did would they make Rick more accessible to the new school fanbase, but they all have styles that meshed well with what Rick does on the mic.

The album begins with one of the best intros of all time: as Rick is being released from prison, inmates (played by Ed Lover, Reverend Run, and Redman) begin rapping lines from classic Slick Rick songs. To this day, I still let the intro play every time I put the album in. Right after the intro, Rick kicks it off with authority on the Clark Kent produced banger “Kill Niggaz.” This song serves two purposes, and serves them well: first, it let’s it be known that Slick Rick is still one of the game’s premier story weavers. Second, it is a deadpan parody of gangster cliches so often portrayed in rap music today. Filled with sarcastic lines such as “Feels good to watch a motherfucker die before my fly ass” and “I’m gettin blamed for murder, this the motherfuckin life,” Rick makes the point that the ideaology behind glorifying mindless brutality is both ignorant and ridiculous if you really examine it.

Up next comes a darkly humorous song with the exact opposite vibe, the smash hit “Street Talkin” featuring Big Boi of OutKast. I’m sure if you were listening to rap music in 1999, you heard this song many a time during the summer of that year. If not, here’s what to look for: Rick flowing smooth as butter and singing the hook, Big Boi coming in and attacking the track with a wicked guest spot, then Rick closing things down, all over a silky beat composed by Jazze Pha.

On the Trackmasters produced “Me And Nas Bring It To You Hardest,” the beat is surprisingly hard edged, and Rick one ups Nasir on this bragfest, boasting “I am such a heavy hitter, even chandaliers jealous of the patch eye’s glitter.” Nas came through and spit one of the trademark Escobar-style flossing verses, and came off well himself. While Rick’s snobbish air and mild British accent make him perfectly suited to talking trash on the mic, which he does plenty of, he did not forget what the people really wanted: stories.

“Who Rotten Em” is a classic example of Rick spinning an intricate tale. In this case, he assumes the role of a peasant in ancient Egypt he quickly becomes the pharaoh’s favorite performer due to his abundant rhyme skills. The whole song is a thing of beauty, with Rick putting the listener right there, then going off into short spurts of some dope battle style rhymes when performing to the pharaoh.

Right afterwards, though, is perhaps the quintessential Slick Rick song, Two Way Street. In this story, Rick is faced with two situations in which the temptation to cheat on his wife is nearly unbearable, but in the end he decides to be loyal in each. The vivid storytelling interspersed with Rick’s trademark humor along with an ill xylophone beat that fits the cut perfectly all add up to equal a near perfect song. Why this was not chosen as the second single for the album, I’m not sure, but it would’ve been a huge hit; as it stands, it’s a dope ass song that proves Rick can still spit a story better than anyone ever has.

On other hand, there’s “Adult’s Only” in which Rick apparently set out to prove that his bawdy sense of humor did not disappear either. In this, Rick talks about two incidents in which he decides to go in through the back door on girls who are not expecting it. The song can be taken two ways: as extremely misogynistic, or absolutely hilarious. Personally, I think it’s the latter, with Rick’s extreme attention such as sound effects and the hilarious reactions of the females (with Rick’s classic voice inflections). Not to mention that Dame Grease hooked up an extremely ill, sinister sounding beat for the song.

The final “album” cut (there are three bonus tracks afterwards, including live performances of “La Di Da Di” and “The Show”) is a perfect way to close things out for The Ruler. He embarks on one of the finest shit talking opuses ever recorded, “I Own America Part Two.” The original (same lyrics, different beat) appeared earlier on the album, and was pretty good, but the beat was not as fitting. This time around, the beat is a smoothed out, regal sounding beat that is the ideal match for Rick’s old school bravada:

“Why you tryin to find shit to lick with?
Even your kids tell you that you ain’t shit to Slick Rick
While you pretend to be glory
I’M number one, that’s the end of the story… A smash rippin up the place, give the Mack a taste
I wipe my ASS with a rapper’s face
Cars come to a dead stop
Rain finds ways not to drop on my head top”

Despite the fact that this would’ve been a very tight album regardless of the circumstances, the conditions surround it are what made it most impressive. Slick Rick had not recorded an album to his standards (he is quoted as saying “[The Ruler’s Back and Behind Bars] were garbage to me”) in ELEVEN years prior to this. For him to come out and record an album that was felt by both his old fans AND people who had never heard of him before, to receive a Gold plaque within just over a month of the album’s release, and to show other old school rappers that they don’t need to completely change their steez to be popular in today’s market is monumental in my book. The REAL Ruler came back in 1999, strong as ever, reminded the hip hop world that you don’t need to rhyme about guns, drugs, money, and killing to be accepted; you just need to be original, be yourself, and be dope.