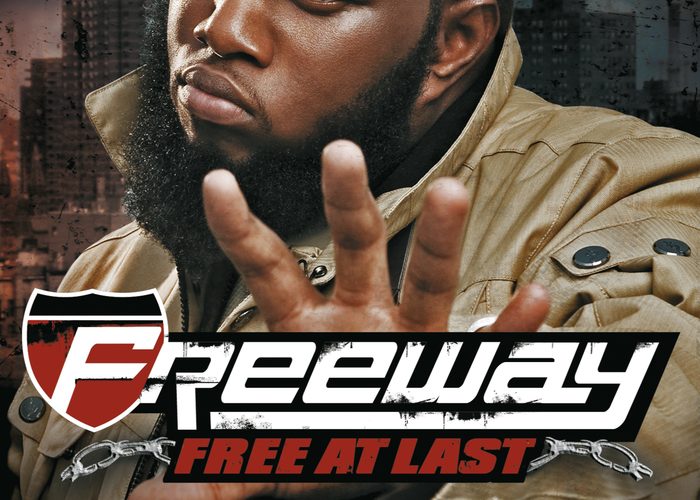 Freeway has always been trapped in the chains of his own environment. The whiney-voiced emcee first made noise by debuting on the collabo track “1-900-HUSTLER”, virtually stealing the show from the likes of Jay-Z, Bleek and Beans. He sure seemed to have a full head of steam, but somehow his solid Freshman release “Philadelphia Freeway” got lost in the mix somewhere between Sigel’s “The Reason” and Ye’s “College Dropout”, and plenty Roc-a-Fella discs in between. The 2003 banger was shrouded in the shadows of the bigger names. They all have their place: Jay-Z is the pres, Bleek is the right-hand man, and Beans is the general, but despite Jigga’s praises Freeway had no strong identity aside from adding his verses into others’ product. Don’t get it twisted–he is on one of the most prominent labels in the industry, so he is doing far better than most, but there has always been that glint of hope that he would be another one to fully realize the unrealistically high expectations of a man in his position. Four years later, with a sleeper under his belt, Freeway is dropping “Free At Last”, which further proves he has skills needed to break the chains that have been holding him back.

“Philadelphia Freeway” was littered with a plethora of superstars, so it’s not as if Freeway was not given the ingredients to make a masterful LP. Production came from the elite; Just Blaze, Kanye West, Bink and others. Guest spots consisted of; Jay-Z, Faith Evans, Nate Dogg, Snoop Dogg and more. It was like all Freeway had to do was boil it into a classic (easy enough, eh?). Instead, we got what we truly expected, which was some good strong stuff all around, yet a lack of balance. So, why expect more from another Freeway release (contrary to popular belief, rappers don’t usually mature in the same ways rockers do)? Especially after he openly admits on “It’s Over” the following:

It’s true. There are no tracks from the two elites. He makes do with beautiful production from lesser known maestros throughout. Freeway uses his resources at hand in a much more powerful way than on his jump-off. Then, there is a subtle hint of irony dripping from the track in question.

The sure-fire single does reach back to his roots, though, with its rigid bounce and very nice sampling of “Big Spender”, compliments of producer Dame Grease. Free taps the top dog, Hova, for the romp “Roc-A-Fella Billionaires” and Jigga delivers tight bars left and right, like, “I just copped me of all things/ A professional ball team/Tell me I’m not the illest hustler you ever seen.” The celebratory track has all the makings of a hit as it focuses on the glitz, but only time will tell if Freeway’s simple presence is a curse in terms of crossover success and mainstream appeal. The first official single, rather, is “Still Got Love” which is a fast-paced cut with soaring vocals. Still, not as good of a choice as the biggest collaborative effort on here.

“Take it to the Top”, another winner, that features a sing-song chorus from 50 Cent is bound to prove the same commercial-appeal formula. Freeway can prove to be extremely raw in certain fitting circumstances, but he also seems comfortable on this feel good track about reaching great heights. It might have many fans of the hardcore persona of Freeway see this as a sellout type of song, which is an understandable concern, only problem being that it works well. Strangely, given the beef with Jay, 50 Cent is an Executive Producer of this album. Too bad he couldn’t channel this level of quality control for his own release of “Curtis” earlier this year.

Balance is the key element that Freeway absolutely nails. Amongst these joints that sound like pure commercial hits, Freeway drops enough dope introspective material to prove that he is well-rounded. “Reppin’ the Streets” has Free reminiscing about his early days, “Couldn’t ask my mother for nuttin’/All of my shirts they had the tigers on ’em,/ironed on ’em/Then I got myself together went to grind for her.” The soft, horn-infused beat rides perfectly with the lyrical content. Meanwhile, he gets an ultra-silky smooth soul sample of “The Overture of Foxy Brown” on another banger, “Baby Don’t Do It”, that features ‘Made’ Southern legend Scarface in top form. It belongs on “The Fix”–it’s that good. Better yet, “Walk Wit Me”, may sound cliche (and to a degree it is) but phenomenal guest spots from Jadakiss and Busta Rhymes who drop fire all over the wax save the boring undertones and turn it into one of the other must-hears.

It is hard to discern any real weak spots on this album. It arguably starts to lose its way near the end with the erratic “Nuttin’ On Me” and hollow-sounding “Lights Get Low” featuring, the alpha-male rapper, Rick Ross. These lesser tracks seem to stray from the soul sampling that works so well through the bulk majority of “Free At Last”. In fact, the production on this Sophomore effort might be the best Soul-music sampling effort since “The Blueprint” (yes, even considering “American Gangster”). The feeling culminates on the spiritual successor to his stellar track “Hear The Song” from his debut, in “I Cry”. ‘Way flows similar to The Game on “Doctor’s Advocate” on some deep stuff that seems believable.

If you have never been a fan of Freeway at all, there might not be a whole lot to completely sway your opinion. He presents the same general style as he did on “Philadelphia Freeway”. With his squeeky, emphasized vocals, this bearded warrior is staying true to himself. However, there are great points of interest on “Free At Last”. The production handled by Bink, Chad Hamilton, Ivan Barias, Carvin Haggins, Don Cannon and others is actually more polished that his star-studded debut. The quality control on Free and his features seem way up too, bringing this into a higher realm that just solid. “Free At Last” is a phrase that might have a deeper meaning for the headliner, as he breaks the chains of expectation and ought to move to a loftier position in the Roc-a-Fella hierarchy. Maybe it can prove to be more than just a sleeper for rap fans willing to give it a spin and blossom into the hit record Freeway deserves it to be. It is one of the finest rap albums of the year, period.