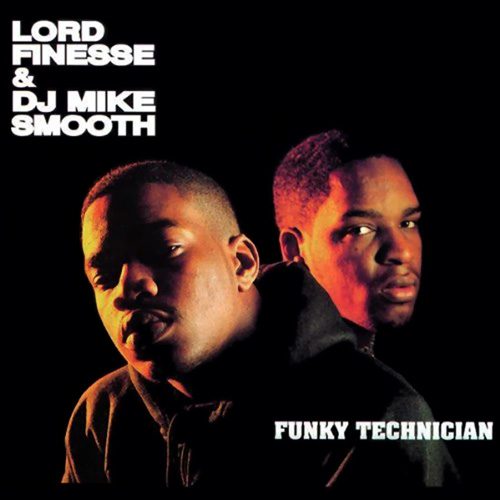 Wild Pitch is simultaneously one of hip-hop’s most influential and forgettable labels. Influential for the artistic roster it had at its peak: Main Source, The Coup, and Ultramagnetic M.C.’s among others. Forgettable for its inability to market or promote any of the deep talent it had; leaving its unfortunate rappers lucky to go wood on many releases and prematurely curtailing the careers of many others.

Lord Finesse is just such a rapper. Though some may know him for his work with the musical collective Diggin In The Crates (D.I.T.C.) and the rap classics he’s produced for other MC’s, the remarkable thing about Finesse has always been how well he lives up to his name. In fact, a fair argument can be made that no other rapper other than The Genius (GZA) has had a more apt nom de plume in all of East Coast rap. To explain why, let’s consult Merriam-Webster and break down the name. Lord: “One having power and authority over others; a man of rank or high position.” Finesse: “Refinement or delicacy of workmanship; skillful handling of a situation.”

As a rap artist, Lord Finesse embodied the latter half of his name in sheer microphone ability. With his breath control, deep but not bass heavy vocal tone, and a penchant for comedic snaps and wit he ranked right among contemporaries from Rakim to Big Daddy Kane. The former half of his name came from an assured self-confidance in his ability; what could even be called disdain for other rappers who just weren’t worthy to carry his jockstrap. It’s no wonder that he and partner Mike Smooth called their debut album “Funky Technician,” because the title track certainly aimed to fix any stale rap mix:

“Now I’m the man with intellect, no one to disrespect
I kick a rhyme and make MC’s wanna hit the deck
And give it up and use they rhymes as a sacrifice
Brothers try they best, they ain’t even half as nice
They try to kick it, by using that softer rap
Me sound wack? Nigga please, come off of that
I’m mystical, musical, I might confuse a few
Lord Finesse gettin funky as usual
Releasin some fresh words, sparkin the neck work
cause I’m the expert, wearin sneakers and sweatshirts
Jeans and hoods, there’s no doubt that I rap good
I walk with a bop with my hat turned backwards
To many, I may look like a hoodlum
But I’m a rapper and a pretty damn good one”

That’s an understatement. The classic funk swing of this track is only enhanced by Mike Smooth’s scratched hook with the humerous lines “mm mm mmm, ain’t that somethin” and Biz Markie’s “damn it feels good to see people up on it.” The confidence of Lord Finesse is displayed with every word he spits; and he even brags they can musically hypnotize and control the masses on “Slave to My Soundwave”:

“Suckers are gettin rich with no type of written hits
But when approached by me they start shittin bricks
I’m not sayin to jump or be scared of me
But in a battle, just prepare to be
dissed and beaten, ripped up while I warm up
or step in range, and get that ass torn up
Or get a beating like Kunta Kinte
Cause ain’t nothin happening steppin over this way
[…]
Lord Finesse got skill, so just remember that
Rhymes I say, express and send with force
I get you hyped, like sexual intercourse
Eat MC’s like a dinner from Swanson
Spring into action like the man Charles Bronson
Step in my way you will get played
when you’re tunin, to the Lord Finesse soundwave”

The musical producer’s list for this album’s twelve songs (13 tracks total) is pretty hard to beat: Diamond D, DJ Premier, Showbiz and Mike Smooth himself. Rap fans will be delighted to know that DJ Premier also mixed the entire album in post-production, resulting in an incredibly crisp sounding record that’s as good today as it was back in 1990. The topic of how Finesse dominates the comp is mostly unchanged throughout, but like Grand Puba or Method Man you find yourself entranced by simply hearing the man talk shit about himself. Even Finesse likes to change it up now and then though, so he actually dedicates one song on the LP “Strictly For the Ladies”:

“This is strictly for the ladies, no if, ands or maybes
We can chill together but hold on the babies
Let’s have fun with this, I stand thunderous
Any girl I get, I work wonders with
Most try to step to me and then get upset with me
Cause I read them up and down like mental telepathy
Now, I settle down but not necessarily
with a girl who wants me for a Cherokee
Or other things that I have in the background
When I cut ’em off they go (Oh it’s like that now!)
Yeah whatever, get yourself together
Cause ain’t nuttin change with Finesse but the weather
Trying to go all out baby? You’d better sidestep
You’re on some new stuff that I ain’t even tried yet
You might think I’m insane or crazy
Yeah, I know.. this is strictly for the ladies”

Guest appearances are kept to a much appreciated minimum, although you will enjoy hearing an early Andre the Giant rap on the track “Back to Back Rhyming.” Save for that from “Baby, You Nasty” to the final cut “Track the Movement” it’s a Lord Finesse and Mike Smooth show. And hey, what could be better than that anyway? With a selection of music that ranges from jazz to 70’s swing to reinterpreted R&B, this duo puts together funky raps that are as technically sound as they come. For better or worse though, this album has become a footnote in rap history due to the fact it’s probably been sampled more than it’s been heard. For those who don’t own a copy of “Funky Technician” one complete run of this album yields a cornucopia of lyrical samples on par with Boogie Down Productions “Criminal Minded” or Eric B. & Rakim’s “Paid in Full.” It’s no wonder so many other hip-hop artists have taken lines from Lord Finesse for their own hooks, because any great song can always benefit from the Lord’s refinement and the way he skillfully handles all rap situations. You can too, by finding a copy of this album used or re-issued. “Funky Technician” is vintage East Coast hip-hop at its finest.