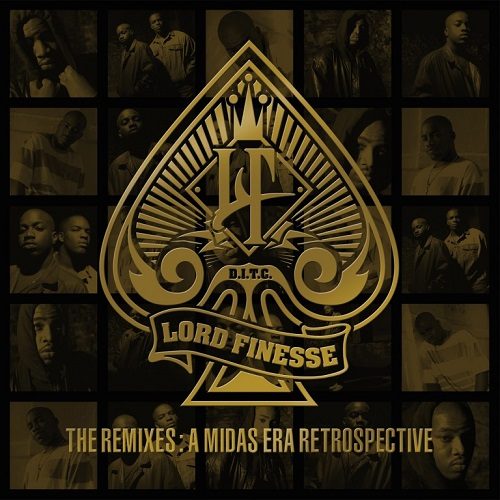 The remix provided one of the first playgrounds for the species known as rap nerd. Knowing those rearranged tunes that were remarkably – or even just marginally – different from the original – or popular – version was a secret lore shared mainly by those who were able to get their hands on 12″ pressings of the latest singles (or would begin to collect them afterwards). The rap song remix went through various phases through time, but if we ask the aforementioned nerd, it ain’t a remix if the music hasn’t changed substantially.

Which admittedly is a late-’80s/early-’90s hip-hop-centric definition. Still if you count yourself among the rap nerd variety, Lord Finesse got something for your eardrums. Back on the scene, long time no hear from, I could continue to quote from his 1992 song “Return of the Funky Man,” but Finesse has in fact kept himself busy since 2005 by reissuing and remixing selections from his catalog on his Underboss and Bossmen imprints, preferrably exclusively on vinyl. “The Remixes: A Midas Era Retrospective” compiles 11 remixes (plus instrumentals) in digital format. To make it clear, these are not historical remixes but later reworkings, despite the fact that the artist explicitly refers to hip-hop’s Golden Age with the phrase Midas Era.

To make it even clearer, these are old rhymes over new beats. This raises the question to what degree this is actually a ‘retrospective’ or even a ‘golden era retrospective.’ It can be the former in terms of original Lord Finesse raps and again in terms of later-era Lord Finesse remixes, but for vintage material please refer to the artist’s previous trips into the archives, “From the Crates to the Files… The Lost Sessions” (2003), “Rare & Unreleased” (2007), “Funky Man: The Prequel” (2012) and “The SP 1200 Project: A Re-Awakening” (2015).

Whereas famous pop, soul and electronic musicians usually get the remix treatment (often in the form of a collective tribute) by a new generation of artists, the Bronx legend keeps it in the family and most of the time even under his own roof. If the artist prefers that strangers not touch his stuff, there’d still be a whole slew of familiar faces who make beats in the Diggin’ In The Crates tradition, such as Marco Polo, M-Phazes, Statik Selektah, or Apollo Brown. These speculations aside, “The Remixes” collects the moments Finesse (joined by Davel ‘Bo’ McKenzie throughout) decided to sit down and breathe new life into his old tracks.

Which is really just a figure of speech because a project like the present one prompts elementary questions about the validity of rap tunes in general. If you presently have any use for Lord Finesse at all, the originals should always be your point of departure or the end of the journey. They are part of history. They made sense then and they make sense now. “Fuck ‘Em” is one of the most unforgiving East Coast tracks from the earliest ’90s period, and no matter who wanted to put his hands on it, I would tell him to keep his hands off. Not surprisingly, Finesse’s take is too sedated to have the same impact depth. The 2012 remix of “Kicking Flavor With My Man” not only faces the problem that no rap song today has a name like that anymore, the mechanical groove makes that the ‘flavor’ is largely gone even from Lord Finesse’s and Percee P’s raps. It’s simply a different affair altogether. DJ Muro is kind enough to create a temporal illusion with his throwback mix for “Slave to My Soundwave.” Japan’s King of Diggin’ keeps it vintage with loops seemingly straight out of a 1989 beat session, exuberant horns and bucking basslines included.

Large Professor retreats back to the study room with “Here I Come,” coming back with a jamming jazz excercise that seems a bit lost in thought. But opposite DJ Muro’s take something he can rightfully call his own. Different approaches aside, both Extra P and Muro are natural choices for Finesse’s more soft-edged debut songs. Another kindred spirit, DJ Spinna, nails “Shorties Kaught in the System” by inserting a spooky vibe next to the lean, funky bounce he chooses for the track. Longtime companion (and former labelmate, even) DJ Premier finally applies his late ’00s sound to “Keep the Crowd Listening,” resulting in an abstract tempo and cleaned-up atmosphere that have little to do with the free-flowing groove of the original.

Finesse himself takes on his comeback tune “Return of the Funky Man,” straightening the pandemonium of the original out with more deliberately dramatic modulations that may or may not be sample-sourced. It’s a remix that matches the verbose verbiage and transports it to a time ahead of 1991/92. Quite appropriately, one might add, considering quotes like “I’m gettin’ paid for rhymin’ in the 21st century” and “In ’91 I show fear to none / cause I’ma get raw and funky for years to come.”

“Yes You May” succeeds as well by leaving ample room inside the sturdy clockwork of the rhythm section for three young hungry Bronx lyricists to go for theirs. The task of remixing a rare Percee P performance should never be taken lightly, and the song’s original host does a swell job by highlighting the elaborate flows, literally reworking the angle (word to Dilated Peoples) from which we look at those performances. One reference point for these and the “Hands in the Air, Mouth Shut” remix could be the chunky but sparse late ’90s Terror Squad/Diggin’ In The Crates sound that became rap mainstream in the early ’00s. “Check the Method” has more of a classic D.I.T.C. feel to it and the heavy-duty makeover matches the song’s harsher tone.

The pros and cons of the remixing game are endless. Music fans often expect that artists feel honored by homemade hobby mixes that float around the internet. By the same token we should accord the original creators full authority over their own work. If the Funky Man saw even the slightest purpose in those remixes, he has any right to dispose of them any way he wants. From a critic’s standpoint, however, the basic rationale behind the remix (and the cover) is that a SONG possesses a reason to exist beyond its initial conception. A remix should be about the song first. And about the artist and his or her identity and influence that are about to be commemorated. A remix needs to have at least a little bit of a purpose. It can try and take the song into a new direction, or simply emphasize or enhance some of its aspects.

Maybe it is specific to hip-hop, that eternal covenant between beats and rhymes, that it can be stressful to see classic tracks taken apart. Still with generations of listeners used to hearing someone else’s vocals over a familiar beat/loop, the opposite is just as much part of hip-hop tradition. Sometimes it works, sometimes it doesn’t. It’s difficult to fully appreciate the inoffensive raps from “Here I Come” outside of their original context, while “Praise the Lord” perfectly captures the production on the two first albums (plus non-album cuts) Finesse revisits here. Speaking of, Primo’s nearly 3-minute introduction is set to a supremely paced, slick beat that easily passes as a modern interpretation of the “Funky Technician” sound (not included in the instrumental section).

In all likeliness a substitute for a previously announced “Funky Technician” remix album, “The Remixes: A Midas Era Retrospective” is a solid addition to the Lord Finesse solo discography. Which curiously seems to circle around two albums released between the years 1990 and 1992. This remix project lacks urgency in the ultimate sense, but if it helps boost Lord Finesse’s profile as a classic hip-hop artist with output worth hearing across decades, hands should go up in the air and mouths should stay closed.