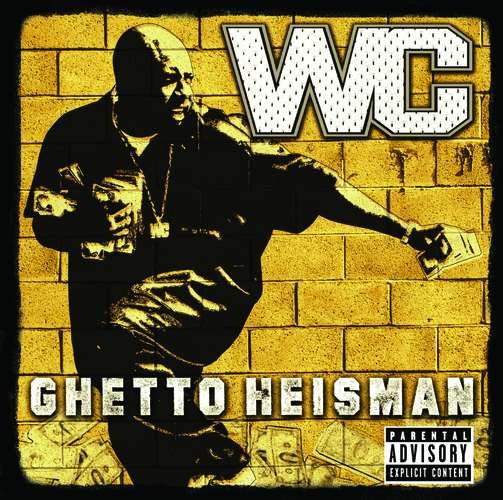 Having been a definitive part of the West coast rap scene since Low Profile released “We’re in This Together” in 1989, long-time veteran WC has long since passed the point of paying dues. One might think that “Ghetto Heisman” is an ironic title then, since he’s hardly a junior or senior player; more like an offensive coordinator or a head coach. If the term implies the same level of excellence Eric Crouch did for Nebraska though, it may yet be apt.

Nominees for the “Ghetto Heisman” have to showcase their strong mentality both on and off the field. WC has done so by proving himself both as a soloist on “The Shadiest One” and as a team leader with groups like Westside Connection and The MAAD Circle. Candidates for the award should also have an outstanding year that exemplifies their rap athleticism. In that case, “Ghetto Heisman” serves as both the example of that athletic ability and the award one should receive for it. And like a true mack, he showcases his outstanding game right from the start on the lead single “The Streets”:

“As I stand an’, toss the tall can on the campus
Off the land of the skanless, takin penitentiary chances
Sick widdit, off the ric wit it
Blue beanie knitted, freshly acquitted
Grind-grimey, the big body in a big body
With lyrics and ‘draulics hotter than the Mojave
Sellin, brubble bellin, career felon
Escalade three-braid beard wearin
[…]
Gangstas, hustlas, pimps if ya follow me
Let me see ya put them hands up like a robbery
I solemnly swear to stay down and slang the seed
I SPIT in the name of the streets!”

Of course, it doesn’t hurt the song to have a hot beat by Scott Storch or guest appearances by Nate Dogg and Snoop Dogg; it’s hard not to be a winner with that team. WC flexes just as well with any lineup though, such as Battlecat behind the boards and Butch Cassidy singing the hook on “Tears of a Killa”:

“Our Father, who art in heaven, hallowed be thy name
I bow to you with a heart full of pain
Tear stains, khaki suited and off the chain
Eyes jaded, straight exhausted from the gizz-name
I play it calm but the truth is
I’m losin my mind, and hopin you can help me through this
All these snitches, punk tricks, cheddar twistin
Phony-ass nias in this record business
Hold down, now let me take my hankerchief and tie it around me
Lake it or pancake it, then slide on my bounties
Ride on, grind on, say a prayer with my strap
Hit the street and get mines on
Bring new heat, swing through streets; I wanna but can’t stop
Choppin and movin this D, I’m in too deep
Andele andele, rips and dime moves build with a nigga
Feel the tears of a killa”

It’s clear to see, you can’t stop Dub-C, he’s gon’ be a rapper for life. Paired with a hard beat, he’s like a great running back with a good lead blocker to open the way through. Give Tony Pizarro some of the credit for playing this role, on earth shattering boom tracks like “Wanna Ride” featuring Ice Cube and MC Ren, “Throw Ya Hood Up” with Toothpick, and “Da Get Together” with another appearance by Butch Cassidy. In fact, guest appearances are not in short supply; Scarface drops in for “So Hard” and Case shows up for “Flirt”, produced by Buck Wild and Rick Rock respectively. The ironic thing is that for all the things Def Jam got right putting WC down on their label, they got one thing wrong for the second week in a row – poor CD mastering makes “Tears of a Killa” skip no matter what CD player you put in, and you don’t even have to be bellin’ or c-walkin’ at the time. It’s a shame they’d mar an otherwise great release this way, because while it may not be album of the year “Ghetto Heisman” does prove that this O.G. is long overdue for his aptly named rap trophy.