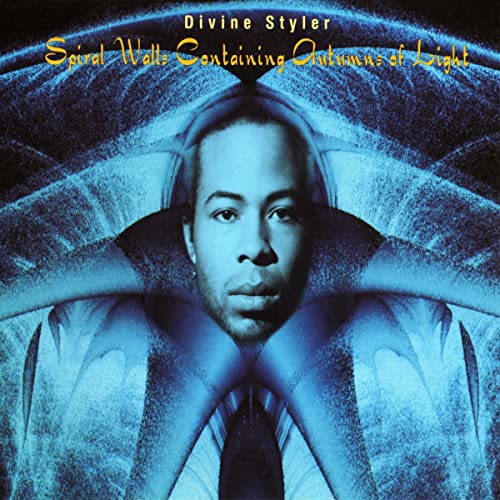 I have a love/hate relationship with albums that try to be weird on purpose. This goes all the way back to the brief period of time in my teens and 20’s when I did college radio, and record labels would literally inundate you with promotional material hoping to catch a break. I’m not exaggerating when I say there were days I’d spend an entire hour just opening the mail we got sent and trying to separate the wheat from the chaff. It quickly became apparent to me that some artists and labels were so desperate to stand out that they’d literally make noise just to be noticed. This wasn’t exclusive to any genre either. I once listened to an album of a famous guitarist playing licks for a whole hour with no singer, no drummer, and no musical direction whatsoever. I coined the term “shred masturbation” to describe it, although I’m also sure I’m the only one who ever used it.

God bless Divine Styler but “Spiral Walls Containing Autumns of Light” sounds exactly like one of those love/hate albums. Even the album’s title is foreboding going in. It screams “here’s a rapper who trips on acid and babbles about the universe” and that’s exactly what songs like “In a World of U” sound. Now to be clear I’ve only talked about the “hate” part of this equation and not so much the “love” portion. Even though people who try so hard to be weird can be like nails on a blackboard, they can also be a refreshing break from the macho posturing of their contemporaries. “In a World of U” isn’t even a bad song at the end of the day. It’s more spoken word poetry than rap, and it’s not profound in any way, but it has a pleasant rock groove that stands out from other rap music from 1992.

“Spiral Walls Containing Autumns of Light” accidentally or purposefully became a touchstone for “transgressive rap” as a genre unto its own. It can be looked back on now as the antecedent to the works of artists like Dr. Octagon and Death Grips. Somebody had to break the mold to give those who came afterward the room to experiment and grow, and Divine Styler broke his OWN mold following the success of his debut “Word Power.” Clearly he felt trapped by the expectations he had to be the same artist over and over again, but songs like “Livery” show that he didn’t completely abandon rapping, he just took his own raps in a brand new direction.

This album is best consumed in its entirety. There are no singles off of it and that’s on purpose. How would you fit a song like “Heaven Don’t Want Me and Hell’s Afraid I’ll Take Over” into a format anyway? Even in the relatively laissez faire genre of college radio, it’s kind of hard to imagine this nearly TEN MINUTE long rambling track getting into rotation. There’s only one time I would have spun a song like this, and that’s when I needed an extended break to leave the mixing board to go get a sandwich, a drink, and take a piss. You really weren’t supposed to leave the studio while the “on air” sign was lit, but sometimes you do what you have to do.

Even the songs that have more of a groove you can jam to like “Walls of Exodus” are over seven minutes long. Remember what I said earlier about tripping balls? Well I’m not advocating use or abuse of recreational drugs (especially and explicitly for those under 21) but man… this would be a hell of a song to listen to stoned. It just seems to stretch on to infinity, with Divine Styler and his band using the sound to wrap your ears and your soul in a toasty warm soft snuggly blanket. It’s the definition of that state of zen you reach when you’re just blazed enough to think everything is beautiful.

It’s clear reviewing “Spiral Walls Containing Autumns of Light” ended up being a pleasant trip down memory lane, but maybe if you didn’t have those college radio experiences Divine Styler’s trippy album won’t pack the same punch. Then again as weirdos go there’s at least an artful nature to his musical experiments that’s not “shred masturbation.” He is actually making something worth listening to and not just noodling around with sound and expecting your applause. This isn’t the right album to listen to between Mobb Deep and Wu-Tang Clan, but it might be the right one to put on between Pharcyde and A Tribe Called Quest.