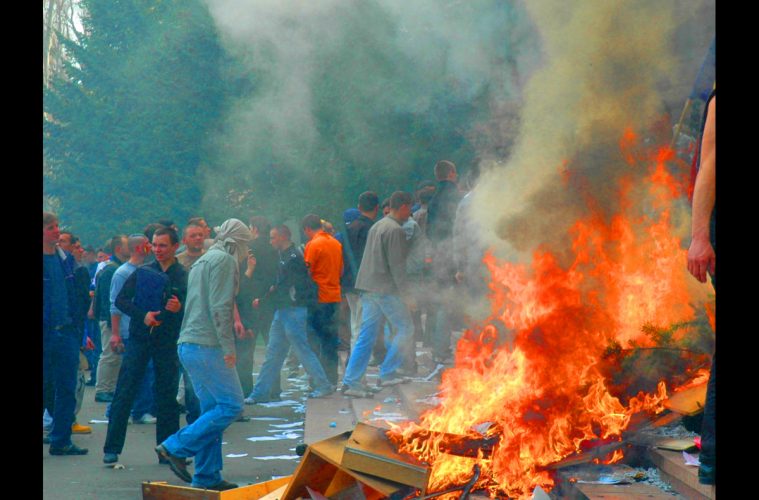 The press release for “Declaring Shenanigans” declares it to be an EP, but at 11 tracks and 35 minutes long, I declare it to be a little more than most EP’s. Now let’s be clear, three of those 11 tracks are Quez reading off his self-composed haikus, but unlike most throwaway albums skits I wouldn’t skip over them. In fact it was “Haiku #348” early on in the album that woke me up and made me think Quez might be worth more than just a cursory glance.

“Get money, shoot guns!
Rappers and Republicans
So much in common”

The kicker is that a concerned Paul Rosenberg type immediately runs in and proceeds to tell Quez he can’t say things like that – and that his views do not necessarily represent glassEyeball LLC – but they PROBABLY do. That laugh is a good reprieve before the heavier “Crazy Like a Fox” featuring Gripp, who also produced the track. The tandem declares themselves a new kind of “mad rapper” than the ones you might be familiar with and slam what passes for hip-hop today.

WOW. I think some emcees are going to take that personally, but they clearly don’t give a fuck – they even put a mock response of an angry rapper at the end of the track as an illustration. Quez’ willingness to attack himself before a critic or hater can do it makes him a unique commodity. It makes me wonder where Quez has been and why I’ve been sleeping on him. All I can say for sure is “underground Atlanta” since there was no bio in the press kit. I do like that he describes himself as “emcee, husband, poet, father” then notes they are “not ranked in order of importance.” Quez seems to have his priorities straight, and a sense of humor to go with, which serves him well on commercial sounding songs like “Motivate.”

I’d like to rate “Declaring Shenanigans!!!” higher than I’m about to, but a few things hold it back. First of all the samples of “Get Grown,” dope as they are, are heavily overused in hip-hop history – and I’m nothing if not a rap historian. I’ll give Gripp that one over “We Put the Ill in Kill” though, a song whose beat never gets off the ground and eventually forces me to hit pause because the loop is too repetitive and irritating. Quez is in that familiar spot so many emcees with some talent and desire are – caught between a rock and a hot beat. Gripp doesn’t shame him on most of this album, and does more than most up and coming producers do for most up and coming rappers, but you can’t help but feel they each need to spend some time polishing their craft. Quez is a little closer to ready, and if they both step up in 2014, I’d like to hear more of Q’s self-effacing humor and politics.