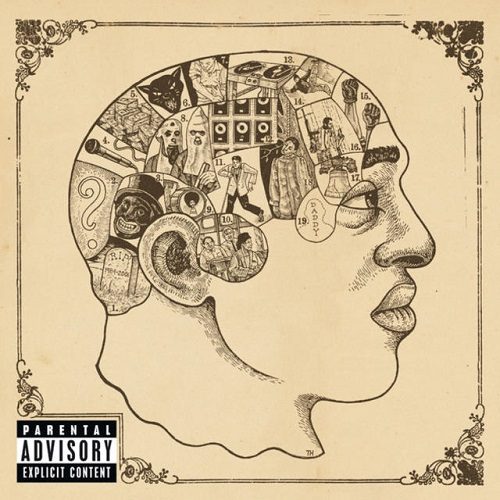 For those who have followed The Roots since their underground debut “Organix” in 1993, it’s been a long strange journey. The pendulum has swung to both extremes in their career — at one apex, underground credibility and lackluster sales; and at the opposite end, massive airplay followed by questioning that they watered down their sound to gain fame. When it was learned that singer/songwriter Jill Scott was replaced by Erykah Badu on their hit single “You Got Me” from 1999’s “Things Fall Apart” it was almost proof of the latter theorem to many. Little did many know that the group had been pressured into replacing the at-the-time unknown Scott by their label, or that lead vocalist Black Thought’s entire solo album was scrapped by said same. The decade old group was been struggling hard just to keep control over their creative freedom in a corporate music environment.

“Phrenology” is born out of their continuing trials and tribulations. And as the title itself indicates, it’s a study of what goes on inside the skulls of a group put under tremendous pressure. Pressure to please their hardcore fans who have been down since their first live set in Philadelphia. Pressure to please their label and have another big hit of “You Got Me” caliber. Pressure to be critically acclaimed for an album that sets trends rather than following them. Unfortunately, one member of the band already fell victim to the pressure. The noticeable absence of Malik B on the album is explained by Black Thought on the song “Water”:

“We walked dogs that was off the chain
Lot of times at the shows, people hardly came
I just, took it in stride as part of the game
But inside, people down with me started to change
It was a couple things; little syrup, little pills
Instead of routin out on the road, you’d rather chill
I know the way the pleasure feel, I’m not judgin
But still I’m on a mission yo I’m not buggin
I got fam that can’t stop druggin, they can’t sleep
They can’t stick to one subject, they can’t eat
It’s people steady comin at me out in the street
Like, ‘Riq, yo whattup with your peeps?’
It gets deep nigga…”

The song has typically excellent percussive and bass work from ?uestlove and Leonard Hubbard respectively, but even while headnodding the heartfelt words of Thought make a lasting impact. The rap portion is only the first movement though – the second and third are instrumental mixes that even the group has described as a “descent into madness.” It’s safe to say that if it’s a view inside the mind of addiction, none of us should want to peer through the looking glass from the other side. Listening to the last six minutes of the track isn’t always pleasant, but it’s definitely a memorable experience. Those who relate to their commercial side better will find comfort in the soothing melody of the lead single “Break You Off” featuring Musiq:

“Rollin down the highway
Listenin to Sade sing
The way the ‘Smooth Operator’ move my way
You sittin beside me
Lookin like Friday Foster
Pam Grier structure look at your body
Keep each other thristy, kisses like Hershey
But lips is sealed, cause we don’t need the controversy”

Leave it to Thought to insert a wry note of irony. Even though the last line of that quote is innocent itself in context, reading the (always fascinating) Roots liner notes reveals that “the controversy” could also be applied to the song itself; which held up the album’s release for five months due to a guest vocalist who snubbed the group and several mixes of the song that were rejected by the record label. The hardships never seem to end for the hardwest working hip-hop band since Stet.

The album covers a lot of bases from “87” through “100” on the CD index. “Rolling With Heat” is a stripped down hip-hop duet with Talib Kweli. “Thought @ Work” is an old school style golden era hip-hop track that also pays tribute to veteran hip-hop lyricist Kool G. Rap. “Rock You” is a crunchy DJ Scratch produced percussive manifesto which makes Thought sound like Reggie Noble. Even Nelly Furtado gets in the mix on “Sacrifice”; a mellow vibe that offsets Thought’s blunt words:

“Your first impression might be I’m a asshole
Or say I’m sometimey and give people a hassle
Or try to suntouch and put the heat in the capsule
Dog I’m far deeper than that though; I get in the zone
Recognize I’m a rolling stone
No time to lollygag or lounge with scaliwags
Give me the disc or I put it where your body at
Old school spit flow laid over Trotter tracks
With no apology fraud or trick-knowledgy
Just trust, what I see and I say and follow me”

If you’re a Roots fan, there’s little here to complain about other than the temporary insanity of “!!!!!!!” on index number 89. Black Thought never fails to live up to his name when writing lyrics, putting down his torment and triumph in due measure with no fear of commenting on things internally or the world externally. He never sacrifices making a point to the rhythm of his flow or the beat of the excellent live sound from his bandmates though. And how can you not enjoy the vibes, lyrics and otherwise, of songs like “Quills,” the sly reference to the Jungle Brothers in “Pussy Galore” and “Complexity” featuring Jill Scott? The album seems to close on a perfect note – a spoken word poem by the incomparable Amiri Baraka on “Something in the Way of Things (In Town).” It’s not quite over at that point though – if you scan through the rest of the CD without hitting stop you’ll hear an updated version of “Rhymes and Ammo” from “Soundbombing III” recorded in the offset of the 18th track. (If you actually try to start AT track 18, this trick won’t work.)

And even when “Phrenology” the CD ends, your experience doesn’t. Early editions of this album are double discs which include a bonus DVD of Roots highlights: the classic videos “Distortion to Static” and “Proceed” along with live performances of “Double Trouble” and “The Ultimate” plus a behind the scenes “bonus clip” of the group. Hopefully this is a music industry trend that continues, because many of the bonus discs coming with albums of late have been good enough to be worth purchasing on their own; and what better way to discourage piracy than to give the consumer better value for the $12-$15 they spend on a CD? This set definitely gives full value, because from casual hip-hop fans to Okayplayers “Phrenology” is the highly anticipated set of material that makes the closing of 2002 that much sweeter. It’s not always an easy listen, but it’s definitely worth the effort.