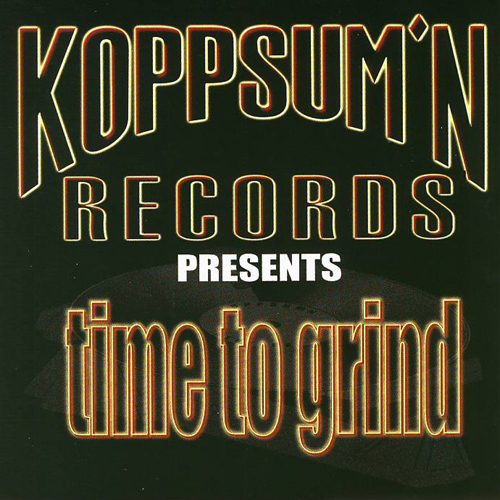 Sometimes albums have goofy-ass names. Like Nas’ “I Am”. I am what? Escobar? Or Jay-Z’s “Vol. 3: Life and Times of Shawn Carter”. I thought ALL your albums were about your life and times? Don’t you have more than three anyway? It seems that the more independent the group or label, the more shit makes sense. There usually isn’t any pretense or misguided wit. “Power of Numbers” from underground fav Jurrasic 5. OK, makes sense. “Overcast” from Atmosphere. Yeah, that’s funny.

Now we can add “Time to Grind” to that list, a compilation of sorts from Koppsum’n Records. From my time living in the Detroit area I knew exactly what the Pontiac players meant by “grind” as soon as the CD startec: Ride, motherfucka. Ride. The 15-tracks that fill the CD are not fabulous: they aren’t going to make you think of Koppsum’n as opposed to Clipse when you hear the word “grind.” However, it’s a near perfect soundtrack for a late Saturday (or, better yet, Tuesday) night when the night lights are shimmering, everyone in the car is antsy and tired, and you’re looking for food, or action, or both.

“Time to Grind” starts with the anthem-like “Wanna Freak” by BF featuring Big Face and Keisha Martin. The simple three-cord beat with syncopated bass and subtle wah-wahs makes the track bounce. You can almost see the maroon-wearing playas exiting the club to their Caddy:

“The drama starts from the valet
Jumping out the Esca with the fresh Pelle Pelle
Timbos and the celly
I’m dipping through the crowd trying to be low-key
Hoes peep me, hoes get at me
Snag, like piranhas on fresh meat
Shaking it, dancing to the beat, might be
One or two fine hoes I’m peepin’
Ocean to the bar, it’s time for some drinkin’
You know what I’m thinkin’
A little conversation, some shots and we out
Got her to my car, no doubt
Verse two, I-75, long dark drive, blunt fired up, hand on thighs
I’m on that tip, so I’m ready for some pitstop action
Pull up in this bitch for some real satisfaction
Freakin’ bitches out â€˜til they’re full of venom
Servin’ hoes dick from my sports utility”

Yeah, you’re not going to find any complex animism (i.e. comparing a gun to a woman) or parallels (i.e. rap game vs. crack game) on this summabitch. We’re just riding, remember?

The lyrics cover the requisite material (hoes, drugs, ice), but still manage to be a noche above traditional indie fare because of decent delivery and clean production. There’s nothing to knock here â€“ it’s just not that original. However, years after the pimp ride persona was made popular by Ice-T, Too $hort and others, they thankfully seem to know where image ends and reality begins.

For instance, “I got hoesâ€¦ I got bitchesâ€¦” is how P.D. Weed starts his ode to women (ha ha) “Misses,” but his out of sync rhyme style and cheekiness makes the listener think that Weed KNOWS how fucked up it sounds and is trying to be â€“ dare I say it â€“ ironic. Or the Swizz-Beats-on-Ritalin-sounding “Uh Oh,” where, over fucked up Casio beats, Tha L.Y.N.X. says over the chorus that he’ll just “bust you in your nose like Geraldo.” Yeah.

However, the best album cut, J-Marv’s “2000 Miles,” challenges the listener and yet keeps the “ride or die” tempo. Vaguely reminiscent of Big Pun’s underrated “100%” or Eve’s debut record “What Ya’ll Want,” J-Marv gives us a trip â€“ literally â€“ to his home country of Puerto Rico. The salsa-riffic beat would make anyone want to break out the Coppertone and rum:

“I’m on a plane to PR wearing shorts and a straw hat
With no shirt, showing off the tat on my back
Flying south, two thousand miles from Pontiac
(Anything to drink sir?) Yeah, bring me some cognac
So I can shake off the nervousness due to plane turbulence
Can’t wait to touch down and check into guest services
Cuz I ain’t gonna front, flying gives me the creeps
So I take about eight shots until I’m drunk in my sleep
Dream about white sands, warm water and sunbathing
Deep sea diving, a rosco pollo with Kool-Aid
Hanging at the beach all day with some bomb babes
Hours later I was awoke by a voice on the PA
(All passengers prepare for landing
It’s 90 degrees in San Juan due to my understanding
I hope you enjoy your flight and have fun in the sun)
I can’t wait to blaze one on this tropical island”

Makes you want to go travel somewhere, right? Unfortunately, the rest of the album is on terra firma, not really encouraging the listener to go beyond their car, nevertheless getting out of that motherfucker. What else did you expect from the Motor City?