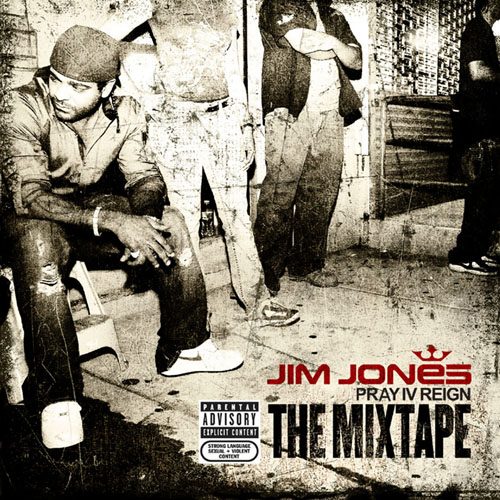 As marketing gimmicks go, releasing an official “available in retail stores everywhere” mixtape before your new album comes out is not a bad idea. People who might turn up their nose at ordering a CD-R in a slimline case from some shady online merchant can’t say the same about a professionally packaged and printed CD in a full-sized gem case. Jim Jones decided to make the offer even more enticing though – each copy of “Pray IV Reign The Mixtape” comes with a coupon to get $3 off the purchase of his new CD when it’s released on March 24th. That’s all good in theory until one returns from the record store with “The Mixtape” in hand and realizes that it cost $5.99 + tax.

Somewhere a corporate executive at Columbia Records has an evil grin on his face and is rubbing his hands together menacingly, knowing this “mixtape” cost less than 25 cents to manufacture. For this writer it’s an even odder purchase considering I’m not the type of devoted Jim Jones fan to happily throw away $3. In fact the best thing I can say about Mr. Jones is that I find him tolerable. He’s the average New York street hustler MC with about one witty line per song (or less) that rises just above the line of mediocrity thanks to good production, a relatively clean flow and catchy hooks. It didn’t hurt that Jones was affiliated with The Diplomats either, given there are so many mediocre rappers in that crew that even an average rapper sounds good by comparison. It’s worth noting though that “Pray IV Reign The Mixtape” makes no mention of the DipSet whatsoever – no logos, no shoutouts, no URL links, nada.

The closest thing left to what used to be the DipSet may be Jones’ Byrd Gang affiliates, several of whom appear on “Pray IV Reign The Mixtape.” You can find NOE and Rell on “Shorty,” NOE and Chink Santana on “Medicine,” Mel Matrix and Sandman on “My Life” and Chink Santana and NOE on “My Life.” If you recognize those names you’re probably pleased, but if you haven’t kept up on the DipSet drama you may be wondering where Cam’Ron and Juelz Santana are. Sorry to disappoint you faithful reader but they’re not on this mixtape nor are they likely to be on one with Jim Jones any time soon (or vice versa). Jones says there are no hard feelings but it’s still pretty clear from this short 9 track CD he’s more interested in the welfare of his own crew than of anybody else’s.

Oddly this may work in Jones favor, because if the DipSet were a fairly mediocre crew, the Byrd Gang are outright banal by comparison. Let’s just break it down mathematically: Juelz Santana > Chink Santana. Chink Santana != Juelz Santana. Jones seems like an even bigger star compared to his new crew than he did compared to his old crew. His lyrics are not mind-blowing on “Trippin” featuring Laylee but they’re the tolerable level of hustler rapping from Jim Jones we’ve all come to expect.

“Never slippin, they know my street religion
Kill ’em or keep ’em alive was my deepest decision
To my G’s up in prison, I feel your pain dearly
Push it to the limit ’til they kill me
Realism’s the drama, if niggaz come and embalm me
If you saw me laid flat would you pay ’em back like it’s karma?
Would my death be revenged by the, bestest of friends?
Or would these niggaz just make t-shirts for the rest of my friends?”

I can’t say Jim, you’ll have to let the Byrd Gang answer that question for you. “Shorty” is an acceptable slow-riding track with an R&B; smooth backdrop. “Medicine” has a menacing backdrop that seems to borrow a bit from the Dirty South, while the graphic sexual nature of the song would impress even Luther Campbell. “Uptown” featuring Rell would be the crossover joint of this CD, if in fact any of these songs could blow up and crossover less than two weeks before Jones’ drops a full length new album. Here’s the curious part about “Pray IV Reign The Mixtape” though. As the CD doesn’t come with full-fledged liner notes, there’s a message inside directing you to JimJonesOfficial.com if you want to know who produced what. If you attempt to do just that the “Credits” section of the website actually lists credits for the REAL “Pray IV Reign” that hasn’t even hit stores. What’s even more curious is that none of the songs on “Pray IV Reign The Mixtape” appear to be on the full-length CD or vice versa.

In the end if you are a Jim Jones fan paying $6 + tax for “Pray IV Reign The Mixtape” may not be such a bad deal after all – no song repeats and $3 off his full-length. It makes you wonder why they even called it a “Mixtape” at all though. There’s no DJ doing shoutouts before, after or between songs. There’s no unnecessary repeats or doubling up of the first minute of a track. For all intents and purposes this seems to be nine songs that didn’t make the cut for “Pray IV Reign” and that’s the most curious part of all – most of these 9 songs are decent. Does that mean that what’s on “Pray IV Reign” is actually vastly superior by comparison? We’ll know soon enough.