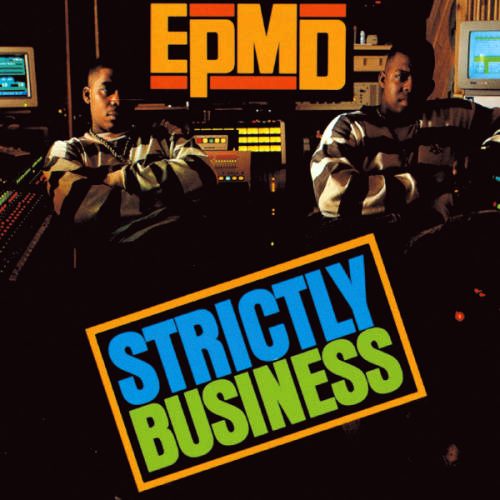 The 1980’s gave birth to a series of rap groups whose names would be forever etched in the hip-hop hall of fame: Grandmaster Flash and the Furious Five, The Treacherous Three, Run-D.M.C., De La Soul, Public Enemy, and the Beastie Boys. These are a few of the many recalled fondly by hip-hop fans and also acknowledged by critics as directly responsible for laying the foundations of hip-hop’s success in the 1990’s and beyond. There’s one name that never seems to get it’s due though; one group that quietly went gold on four straight albums simply by being about their “Business.”

Erick and Parrish Making Dollars. Not a very profound name for a group, but when you shorten it to EPMD it rolls off the tongue like water on a duck’s back. Simple, yet incredibly fresh. Erick Sermon and Parrish Smith only cared about one thing – making the raps to make your hands clap, fingers snap and toes tap. Two brothers from Brentwood, Long Island who were dead serious about making you bust a move. Hardcore, but not cartoonishly gangster. Clever, but not obscenely complicated. Smooth, but still rugged enough for all the b-boys while fly enough to pull the honeys. The group itself was something of a contradiction – Parrish Smith a.k.a. PMD often called himself “MC Slow Flow” yet Erick Sermon a.k.a. E Double E was often the same tempo or a step slower. In fact, given the latter’s lisp, it was almost impossible to imagine him at a breakneck pace. Like his contemporary Kool G. Rap, it was equally impossible to imagine him being as dope WITHOUT it. The way he spoke left you hanging on every word, and partner P balanced E’s thick-tongues deep throated flow with a mellow baritone that mixed their raps like vanilla and chocolate.

Of course, no great artist or group can make an impact without a great introduction. “Strictly Business” may have implied their hip-hop work ethic, but the album could have fallen on deaf ears without a great single to expose them to a jaded New York rap audience, and subsequently the world. With “It’s My Thing,” EPMD found their niche. The sound of the helicopters flying in at the beginning of the track says it all – EPMD’s on attack and dropping in without notice. E and P both came to bust some serious verbals:

“The rhythmatic style, keeps the rhyme flowin
Good friends already bitin, without you knowin
Can’t understand, why your body’s gettin weaker
Then you realize, it’s the voice from the speaker
The mind become delirious, situation serious
Don’t get ill, go and get curious” -> Parrish Smith

“Nuff about that, let’s get on to somethin better
And if gets warm, take off the hot sweater
And if you want some water, I’ll get you a cup
And if you don’t want it, then burn the hell up
I’m tellin you now boy, you ain’t jack
Talkin much junk like Mr. T at your back
but he’s not, so don’t act cute
Cause if you do you in hot pursuits” -> Erick Sermon

The smooth flowing funk track, the repeated sample interjecting the words “You out there? LOUDER!!” and a chorus letting the music and samples of said same phrase say the rest with only P’s “it’s my thing” to introduce it – the simpler it was, the more powerful it became. The track became legendary. Parrish’s “freeze” followed by a long pause… then hearing him say “music please” designed to make a group of rap heads or a whole party erupt simultaneously. Erick’s coy brag rap that MC’s have to be “silky like a Milky Way” when he was obviously talking about himself was ill to the utmost. While “It’s My Thing” was an excellent start, “You Gots to Chill” took it to a level no one could have even imagined. Zapp & Roger Troutman’s “More Bounce” became synonymous with dope rap the moment this track hit the airwaves; forever married to the cocksure raps of E and PMD. To put it bluntly, if the words “relax your mind, let your conscience be free and get down to the sound of EPMD” don’t put an instant smile on your face, you obviously never heard the record. If the Library of Congress is putting together a selection of the greatest American songs ever recorded, this one MUST be included. The last two verses say it all:

“Catch every word I’m sayin, no there’s no delayin
Don’t hestitate to motivate the crowd I’m not playin
Seeing is believin, you catch my drift?
Don’t try to a-dapt because I’m just too swift
(How swift?) I’m so swift and that’s an actual fact
I’m like Zorro, I mark a E on your back
I don’t swing on no ropes or no iron cords
The only weapon is my rappin sword” -> Erick Sermon

“Intimidate MC’s with the tone of my vocal drone
when I’m pushin on the microphone
Cause I’m the funky rhyme maker, MC undertaker
The one who likes to max and relax..
and when it’s time, issue diggum-smack
I keep their hands clappin, fingers snappin, feet tappin
When it’s time to roll Uzi patrol was packin
The PMD, the mic’s my only friend
And through the course of the party, I kill again and again
So if you’re thinkin bout battlin you better come prepared
Come witcha shield and your armor geared
You gots to chill..” -> Parrish Smith

It’s hard to truly comprehend how influential this album was 15 years later, especially if you grew up after the era of the first EPMD union before they broke up for a large part of the 1990’s. To start with, there’s not a single song on the whole album not worth listening to. Even Souls of Mischief fans will recognize the Sermon “What a way to go out, out like a sucker” from “I’m Housin’,” because this album is one of the most RE-sampled in all of hip-hop. EPMD were no strangers to re-interpreting other rap contemporaries themselves, as they took the Beastie Boys line “Let it flow! Let yourself go!” and had DJ K La Boss turn it into the chorus of the magnum opus “Let the Funk Flow.” Even the Steve Miller Band was not safe, as “time keeps on slippin'” throughout their dismissive track “You’re a Customer.” Who is a customer? Anybody who has to bite EPMD’s style to be as funky as they are. “Strictly Business” even inspired a crazy ridiculous dance aptly named “The Steve Martin” which has sadly never gotten the recognition Digital Underground’s “Humpty Dance” has as a hip-hop fad. Parrish himself explains it best:

“Now this brand new dance, I know you not with it
You might break your neck, to really try to get it
If you seen the clumsy movie it was called The Jerk
You had to check out Steve Martin as he started to work
He was doin freaky moves with his feet and head
With his blue farmer suit and his big Pro-Keds
Now if you wanna learn it, it really takes time
That’s why I’m here now tellin you this rhyme
And if you never seen it, then I’ll be startin
My brand new funky dance, called the Steve Martin
Like this… get em Steve, get em
Get em Steve, get em Steve, get em”

Last but not least, on this album’s final track started one of the greatest on-going sagas of hip-hop history. Few may have realized it the first time they heard “Jane” but the song about a fly female out of control would inspire three sequels on successive albums, each one more buckwild and crazy than the last. E and P trade lines like Run and D on this all too short tale of one funky escapade:

“[E] She came behind me and then she rubbed my back
She started moaning and said ‘Yo, let’s hit the sack’
Went to my room because she was kinda bossy
Girl broke buckwild
[P] And started playing horsey
[E] She showed pain but inside she felt joy
[P] Ayo she broke wild and said “Ride em cowboy!”
[E] Three o’clock on the dot
[P] Tired of busting her
[E] Woke up in the morning to my record ‘You’re a Customer’
She left me a note, she called me the medicine
Said next time you have to be better
[P] Bigger
[E] Stronger and much faster”

Yikes! Jane is a sister not to be trifled with. If this gets you open, don’t forget to check the rest of the series. They aren’t hard to find, because every EPMD album after this one stuck to one theme – being about their “Business.” On the second album they had some “Unfinished Business,” on the third it was “Business as Usual,” and so on. Those classics would not have been possible without this debut though, and a lot of other great rappers who got down with their crew called the Hit Squad would not be here today either. Redman, Keith Murray, and Das EFX to name a few. EPMD may not get the same level of acclaim and fame as other rap groups from the 1980’s, but try to imagine going to any house party back then from Chicago to New York without hearing at least one of their songs spun and you’d probably imagine a bunch of angry b-boys standing around waiting to fuck shit up. In fact maybe that’s why everybody’s so angry today, there’s just not enough EPMD in their life. Homeboy, “You Gots to Chill.”