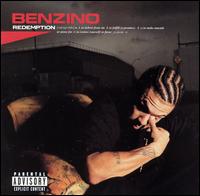 The Source has a credibility problem. Benzino has a credibility problem. There’s really no reason to state these facts seperately though – the credibility problem was caused because the two are now indistinguishable from one another. It’s the LEAST well hidden secret in hip-hop that Source co-founder David Mays and Benzino have “cozy” relationship. (You can find a recap in the “Benzino Project” review.) In recent months Benzino has been involved in a highly public feud with Eminem over hip-hop credibility. B kicked the same tired “white guy doesn’t belong” argument that’s been beaten to death but failed to note the irony he’s half-Italian. Needless to say the rapper who developed his indie rap rep by never being afraid to say something crass or beat an MC down verbally quickly dissed him back. The Source/Benzino responded by running a Harry Allen article in their January ’03 issue comparing him to Elvis (*yawn*) and just to prove their point used the “Last Word” page to post a cartoon in which a Boston Celtics jersey wearing thug smashes life-sized M&M’s while a white candy coated M&M hides in fear around the corner.

Ironically, both parties did Eminem a favor. Just when he was in danger of losing his underground credibility with three platinum albums and the smash hit movie “8 Mile,” Benzino’s attack is seen as “Redemption” for the crossover success by many of his fans. As long as he is being questioned, challenged, and not truly accepted by the hip-hop community, he’s still fighting an uphill battle for respect. And if The Source is throwing their weight around this heavily, it’s definitely going to be a challenge. They may have lost some respect over the years, but they are still the largest and most widely read hip-hop magazine in print, and have expanded into “Hip-Hop Hits” compilations and “Source Awards” television shows; sadly, the only thing hip-hop has that’s even close to a similarly genre based show like the Country Music Awards. It’s a safe bet Eminem won’t be receiving any awards there now, nor will his albums get a fair review even though mediocre Benzino albums routinely get high scores. The latter fact alone already made people suspicious of The Source, but backing Benzino in his Eminem feud is the last straw for the few true believers left who still remember the days when 3rd Bass made the magazine’s cover.

The worst part is that Benzino has never been a terrible rapper, and his crew Hangmen 3 are some of hip-hop’s best producers, with beats that are always respectable and occasionally stellar. It’s just hard to take Benzino seriously any more, because when he can’t stand on his own two The Source props him up. Little surprise that his latest album comes with an offer for three months of The Source for free. They aren’t even trying to distinguish themselves as seperate entities. It may be more honest, but if it wasn’t so pathetic it would be comedic. That says nothing about the actual content of “Redemption” though, which as usual is not as bad as the loathesome actions of it’s star MC. “Hoola Hoop” has a respectable dancehall slackness to it, and you could even picture Sean Paul on a remix. “Call My Name” has a hot beat by L.E.S. and features a nice cameo appearance from Jadakiss. “Make You Wanna Holla,” “Gangsta’s Touch” and “Neva Shuvin'” are all examples of Hangmen 3 at their best behind the boards; while the latter two features tight guest raps by Caddillac Tah and Wyclef Jean respectively. And of course, most people have probably heard the heavily promoted “Rock the Party” by now:

“Rollin through the city wit the CD on blast
Pull up at the mansion had to dip up in the stash (yea)
Scene lookin sexy shorty got a fat ass, oh-my-God
Step up in the place everybody gettin wet
Sweatin on the floor dancin like they havin sex
Poppin champagne taking bottles to the neck, uh uh uh, yea
Lookin at my Jacob it’s about that time
Sun’s comin up bout to close the blinds (yea)
This is how we do almost everyday
Now meet me upstairs wit Courvoisier”

Benzino’s lyrics certainly aren’t worse than any other rapper with two feet rooted in the underground and one hand reaching out for commercial airplay. His pleasantly gruff voice and on-time vocal delivery work even on tired concepts like “I Remember” – the umpteenth track to have that title or to reminisce on good times in the past. The worst thing you can say about him on the mic is that he’s better than average, so you can’t really hate on him for the skills. He’s definitely not an exceptional rapper though. He doesn’t have writtens on a level that could fuck with Rakim or Jigga, he doesn’t have snaps on a level that could fuck with Mad Skillz or Redman, he doesn’t have charisma like Chali 2na or E-40, and he doesn’t have mind-blowing flow ability like Twista or Eminem. Actually, the latter has almost all of those qualities – so for Benzino to be fucking with Em is like a double-A ballplayer having a home run hitting contest with Sammy Sosa. Unless it’s jury-rigged from the start, who do YOU think is gonna win?

Many people are going to want to hate this album on principal, because the rapper and publishing empire behind it are both on thin ice that just cracks more every time they do each other favors. It’s not a terrible album though. It would be hard to have a terrible album with tracks like the Tone Capone produced and Outlawz starring “Redemption (Rosary)” or the Trackmasters laced “44 Cal. Killa” featuring Scarface. Of course, Benzino has never had any problem getting good guest MC’s or good producers to appear on his albums — maybe they’re afraid of a bad review in The Source if they don’t appease him. Matter of fact, this review might just be suicide for RapReviews.com if The Source decides to do to us what they’re doing to Eminem. He’s got millions of fans worldwide and they can’t silence them all, but they could squash this site like a bug with bad press and negativity if they chose. What do we have? We have an honest review. Benzino’s attitude sucks, and it’s hypocritical to boot. The Source is little more than his personal stomping grounds to say and do what he pleases, and for them to promote him ad nauseum. Many people with self-respect won’t buy this album as a result, but when it goes in the clearance bin “Redemption” will be well worth your five dollars. Let Benzino/The Source hate on that all they want – it’s the honest truth; which is more than you’ll get if you read their magazine.