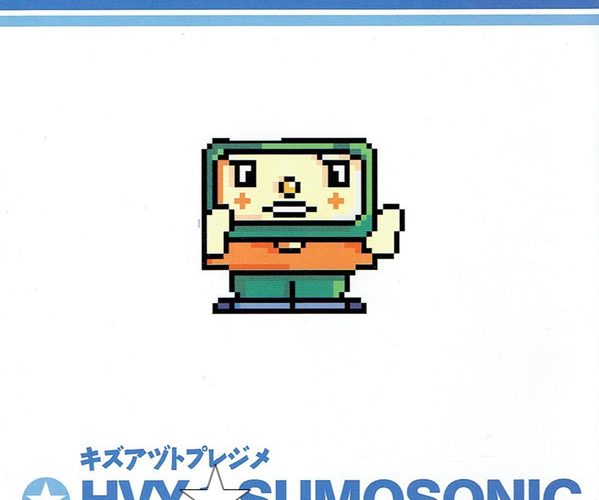 New-school compilations are, quite literally, a mixed bag. For instance, the annual pop compilation “Now!” is a lot cheaper than buying all those $17.95 CDs individually, but you get a lot of songs you’ve already heard a gazillion times. And magazine-sponsored compilations have some tight shit, but the content can be, ahem, biased based on the sponsor.

The best compilations are those with a common theme or vibe– some of Fatboy Slim’s shit comes to mind– and not those lumped together just because they are all new. “Heavy Sumosonic 8,” which can be called an underground “Now!” series, unfortunately falls in the latter category. Still, the outstanding of the eleven tracks carry the weight of the weaker.

“Brown Sugar (Extra Sweet),” the title track last year’s romantic comedy performed by Mos Def and Faith Evans, starts the set, getting things squarely off on the wrong foot. Mos and Faith fans, which I am both, will be shaking their heads in unison like “What the fuck?…” with the uninspired beat and incessant biting. “Honey, check it out, you got me mesmerized” Mos says over the tired beat/with your black hair and your fat ass thighs.” Not only is it too poppy of a track to start that line with, but Dante doesn’t even sound better than Q-Tip — nor Snoop Dogg, who he bites later. Yuck. Sumosonic then gets into “Devotion 92,” by Charizma and Peanut Butter Wolf, which sounds just like a C-level cut from ’92: flat, non-sensical lyrics, boring scratches and a busted beat.

Enough bitchin’, though. Before you pop it out the CD redeems itself on Track 3, “Ghetcho Soul Togetha Part Two” by Breakestra, remarkably from the same album, Peanut Butter Wolf’s “Jukebox 45’s,” as the bootie “Devotion 92.” Instead of ’92 however, on “Ghetcho” you get ’62: straight motherfuckin’ soul funk. Think James Brown’s band, the JBs, playin’ their best shit, like some background music to the scene of an action movie where the main hero kicks everyone’s ass in the club. Breakbeat and all, you can tell this was the shit Premier and Pete Rock were grown and fed on. Oh, and there isn’t any rapping, sans the grunts at the end of the cut. This song alone made me excited to get the compilation — or just eager to get Peanut Butter Wolf’s full CD.

The rest of the album is less extreme: less bad, but far from outstanding. “I Got a Right Ta” by Common and Pharrell Williams sounds like the shit at first with its deep organ groans, but it fizzles after you figure out Common doesn’t know how to flow over the space-age grind-din’. And “S.K.I.L.L.Z.” by, ahem, Skillz, is full of hilarious lines, but the beat is just a bit too soft (and R&B) to really compliment the battle rap. Still, he gets props for bringing the pain:

“I’m a problem, you’re better off calling Jake
Before you see me you’ll see X doin’ the Harlem Shake
Ask your man who own the state
I know the album late, but when it this hot, shit, you suppose to wait
Son, I spit like 4 bars
Then I got Kevin Liles on the 2-way offerin’ 4 cars
Skills get the same cash
For the past 2 years I been windin’ it up like Dame Dash
Ahead like no other, check my wear
First nigga to pop his collar on an album cover
As far as battlin’, yaw cats’ll get hurt
You pull out 2-ways, I’ll bust your ass over your alert
I’m back, don’t slip now
I ain’t worried about you ballin’ hard, nigga, you on your fifth album
Trust me, I’m gonna stay, you need to keep your nose clean motherfucka
I own VA, come on”

“Tattoo Remix” with Twista and Legit Ballaz is a tight heavy beat to ride too; ditto for GZA’s “Fame,” but neither one make this album a must-have. The problem is that the eleven songs together don’t keep a certain tone. Say, if they took “Ghetcho” and “S.K.I.L.L.Z.” and put similar songs together like, say, “The Bounce” from Jigga’s “Blueprint 2” or Missy’s “Funky Fresh Dressed,” we’d have a fun party starter. But jumping from Common to GZA to Mos just doesn’t work with this.

Luckily at the end of album the CD does decide on a sound: Underground mixtape shit. It rounds out the set with “It’s A Wrap” from C-Rays Walz, “The Ox (Fantastic Four)” from Madlib Invazion and Medaphor and Oh No, “Pressed Wax” from Bukue One and “Let The Music Play” from Stimulus of the Real Live Show. They all shine, from the fun island beat of “It’s A Wrap” to the demonic piano of “The Ox (Fantastic Four),” where the MCs claim to “Lay you to rest/and then wake you up like Zest.” And then we get Jamaican/Japanese flavor (think Asian instruments to a reggae beat) on “Pressed Wax” and the truly weird compilation finishes with the short, but sweet groove “Let The Music Play.” In all, a few cuts (“Ghetcho,” “Let The Music Play,” “Tattoo Remix”) are great — but why don’t you just get those albums?