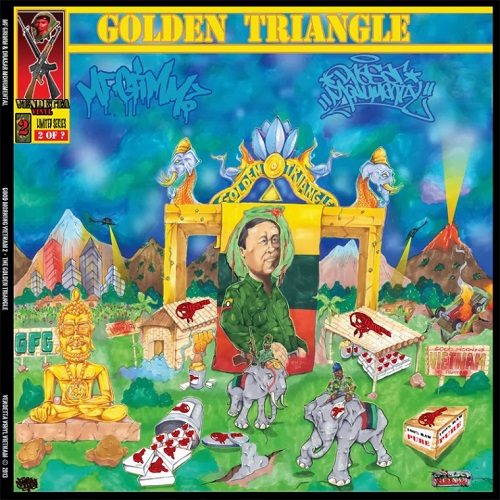 From Sesame Street to a prison cell. The life and times of Percy Carey b/k/a MF Grimm are aptly described in the title of “Golden Triangle” when he says “I don’t need a middleman/I’m an overwhelming force/I make it happen.” He certainly does. Grimm is arguably one of the more inspiring (and unfortunately less discussed) figures in hip-hop, having experienced more highs and lows in his lifetime than can be fit into a single album (or in at least one case a TRIPLE album). He owns his own record label and has used it as a platform to launch both his career and that of others, and his unlimited imagination was only bound by his simultaneous pursuit of the street life. He wound up paralyzed in a driveby, wound up jailed for 4 years to LIFE in a narcotics bust, and in a testament to his sheer strength of will overcame BOTH and studied law behind bars until he successfully appealed for a reduced sentence.

The second in a series of collaborations with producer Drasar Monumental, the second “Good Morning Vietnam” shifts the focus to the samples found throughout the first film to borrowing from “American Gangster” for the second. The link is not hard to find though given the song depicted an (exaggerated and fictionalized) account of drug kingpin Frank Lucas, who imported his drugs from Vietnam – boasting at one point that it arrived in the caskets of dead American soldiers (and this has been disputed). In some respects this parallels Percy’s real life as a drug dealer, although the details of Grimm’s life have not been made into a major Hollywood motion picture (yet) – and of course we have no idea who Grimm’s suppliers were. It makes for a good parallel though.

“Some foes be jealous and don’t feel me
Full arsenal, come to kill me
Contract hits taken on me – really?
Get the job done, come on don’t be silly
Assassination attempts I survived, them jealous niggaz despise
to bite hand that feed, indeed…”

Throughout the 40 minutes of “Golden Triangle” the one unshakable element is Grimm’s confidence in himself and the fact that he “dreamed the impossible dream.” Coming from anybody else those sentiments on “Percy Carey” would carry a warning about hubris, but Grimm is his own reality check when he says “Who do you think you are? What make you think you can do what no one else on Earth can do?” At times the sampling overtakes the storytelling on songs like “What Went Wrong” so that modesty is well placed. Grimm’s flow also unintentionally reflects another parallel to his life on GVA2 – at times it’s a start and stop afraid. When he really gets going though on songs like “Economic Deprivation” the force of his words and intellect exceed the beats:

“Watch your back, echoed through track, when monitored by the wicked
Some tried to beat machine and used brute force when best course is to trick it
John Henry had a hammer, challenge the train – I wondered why
If he would have used his brain instead of his brawn John Henry didn’t have to die”

Drasar Monumental and Grimm have a good partnership going and here are some gems here like the gritty and grungy “20%” and the epic 5 minute plus “Caged Bird.” There’s a lot to like on “Good Morning Vietnam 2: Golden Triangle” and I continue to admire Grimm’s resilience in the face of so many setbacks over the years.