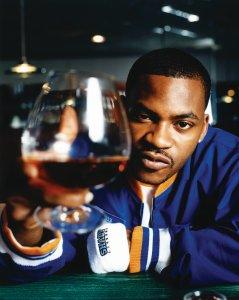 Real name, no gimmicks. Hip-Hop fans knew about Obie Trice long before his first album dropped thanks to a cameo in Eminem’s “Without Me” video. A handful of years later Obie’s been on top of the world with hit songs like “Got Some Teeth” and been a virtual unknown only a few years later with people wondering where he’s been and hearing rumors that he’s broke and selling his furniture on ebay. So what’s been going on with Obie Trice? Well, pull up a chair, the second round’s on him and he’s about to tell us all about the past three years, how the murder of his good friend Proof has changed him, and what was really up with that couch incident.

Adam Bernard: Obie, what’s going on? Let’s start with the order of business for the day, talk to me about the new album, “Second Round’s On Me”.
Obie Trice: On the new album I’ve got producers on there form west coast, east coast, down south, all over the place. I would say the new album, it leans a little bit on the soulful side more than the old album did. This album shows a lot of growth. It’s been almost three years since I’ve put out an album so it shows a lot of different things, it shows growth lyrically. I’m doing a lot of things lyrically I didn’t do on Cheers and I’m talking about a lot of things I didn’t touch on. I’m just in a different space than I was then so it’s just a whole different feel.

AB: With an album title like “Second Round’s On Me” how many people are going to come up to for drinks after you release this album?
OT: You know what, I get a lot of that now, so probably a lot more.

AB: You mentioned the three years, why the long wait between albums? I can remember a year and a half ago I said whatever happened to Obie Trice?
OT: Right, right. It was mainly just working and getting things together in my personal life and tryin to make the transition from being in the hood to being a star and being in the music business. It was just getting things right for me, how I want them, and working in the studio trying to make the best second album I can make.

AB: In-between projects a lot has happened within the Shady Records family, most notably the passing of Proof. How has his passing affected you and your outlook on life?
OT: Proof was a real good friend of mine we were real close. He had a daughter by my first cousin and he had just found that out not too long ago. It was one of those things, man. It was an unfortunate thing that it happened, I don’t think he deserved to go out like that, he was a real intelligent brother, creative, had a big heart and was a soldier. It’s an unfortunate thing but did it change my outlook on things? You could just go any minute, anytime. He didn’t wake up that day thinking that was going to be his last day, or those were the last clothes that he would ever wear. That shirt that he had on was the last shirt that he could pick out to wear. It just lets you know enjoy it while you’re here because it’s a roller coaster, do the best you can and just keep moving.

AB: With his death being a shooting death do you see you and the other Shady Records recording artists toning down, or at least being more aware of, gunplay in your rhymes?
OT: No, I don’t see myself toning down my music. I feel like gunplay is reality, it happens everyday and it don’t get that much publicity. This is real, this is real life and just toning it down, I don’t think that’s going to change that. Violence occurs. There’s poverty in the city and as long as there’s poverty that’s where violence will stay.

AB: I have a couple questions about the first album. The song “Bad Bitch” was one of my favorites. How did you and Timbaland lay it down?
OT: When I got the Hit Factory in Miami he made the beat. He went in there and he said give him a minute. He went into Studio B, I was in Studio A, he went in there and in about 45 minutes he came out with that track. It was just one of them things. Timbaland is dope and it was a pleasure to work with him, I plan on working with him again in the future. It’s one of them things, we got down there, he harmonized the thing, hummed it to me, and I just put the words in and replaced that hum. It’s a joint that we really shot a video for, it should have been a single.

AB: Tell me about the Entourage hook up? I heard “Wanna Know” at the end of the Sundance episode last year and went bananas.
OT: I think it was just a submitting thing. I guess the labels got information that they were looking for music, we submitted it and it was a song they just jumped on. I thought I was supposed to shoot a video for that and I was gonna have all the dudes in the Entourage show sitting in the car and my man driving the car and I’m just rappin. HBO was talking about doing a video for that but it must have fallen through, I don’t know why. We just didn’t jump on it like we’re supposed to because that could have been big.

AB: You have been the central character of some really strange rumors. Did you really sell a couch on eBay?
OT: Naw man, it was a joke. Me and my people we really play crazy jokes on each other and one of my dudes got a hold of some pics and he set that up on ebay and instantly it was around the world. You wouldn’t understand how crazy his email address got. It was just one of them things, we do shit to each other and he got me good.

AB: Did he end up selling the couch out from under you?
OT: We ain’t never sell the couch, we pulled that information off the eBay because people was coming up to me and I didn’t even know what was going on. I finally found out and he had to stop the whole thing like OK you got me, that was a good one.

AB: What else gone on in you life in the past few years that’s strange but true?
OT: I think that was mainly it right there. That’s the only one that I can think of.

AB: So what do people NEED to know about Obie Trice?
OT: I would say that he’s an incredible artist and that he’s gonna go down in history as one of the best dudes that done it.