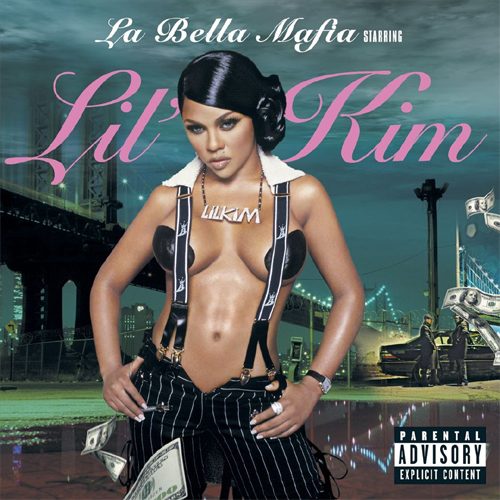 Even over a decade and a half later, the Beastie Boys are still inspring hip-hop artists. Who would have guessed that the Queen Bitch, La Bella Mafia herself Lil’ Kim was one of them? Nevertheless, the first song you’ll hear on this album is a Havoc produced remake of their classic “Paul Revere” – or perhaps one should say re-TAKE. She’s got a little story to tell, and the beat is the same, but as always Kim’s got a whole new take on the game:

“And since Frank White taught me how to play the game
La Bella Mafia, nigga I play to reign
They put my album in the street like they pump the ‘caine
I’m like bleach – Lil’ Kim leave a permanent stain!
I’m feared in my country like Saddam Hussein
I might give a, little head to {“hold it hold it now”}
All we ask is y’all show respect
Cause we don’t want talk, big homey, just cut the check!”

Of course what’s a hot new album from the hottest (figuratively and literally) female rapper in hip-hop without a hot new Timbaland track to light shit up? Even the Wu-Tang couldn’t stay mad at her called this joint “The Jump Off.” Mr. Cheeks cameos to reprise a Lost Boyz chorus, and Kim herself has a lyrical nod to her guest role on “Delerious” from the Swizz Beatz LP:

“Black Barbie dressed in Bulgari
I’m tryin to leave in somebody’s Ferrari
Spread love – that’s what a real mob do
Keep it gangsta look out for her people (for her people)
I’m the wicked bitch of the East, you better keep the peace (aiyyo!)
Or out come the beast!
We the best still there’s room for improvement
Our presence is felt like a Black Panther movement
Seven quarter to eights back to back with ’em (back to back)
And I’m sittin on chrome, seven times platinum”

You might have expected that “Can You Hear Me Now” featuring Missy Elliott would also be Timmy talking, but surprisingly this bouncy club hit was laced up by Scott Storch. One thing is for sure – no matter male or female, the best rappers in hip-hop have a little arrogance about their own greatness; Kim’s rhymes on this song prove she is no exception:

“My last album, some of y’all wasn’t ready for it
Alright, I slow it up, put the brakes on for ya
I know what I’m doin, I ain’t losin my mind
I’m just so advanced I’m ahead of my time
You all stuck at the back, I’m ahead of the line
Even in the dark, I’m still gon’ shine
You’ll see what I mean in 2009
I kick outer space raps – ILL RHYMES
Live guitars, nigga fuck cars
I’m tryin to buy a spaceship to get to Mars
Look out the window, and reach for the stars
It’s a new day, Lil’ Kim’s in charge”

Kim definitely establishes one thing – if the song is mentioned on a promo sticker covering her album, you can bet it’s gonna be hot to death. Heads probably expected that, so the question remains whether ot not the rest of the LP is filler or killer. “Thug Luv” answers that question. It’s another Scott Storch banger that ironically follows the aforementioned track back to back, but this time the guest is Twista instead of Missy. On a song crafted for the Chicagoan’s speedy flow you might expect Kim to get shown up, but she lets her titties hang and busts back just as fast as he does:

“It’s the T-W-I-S to the T-A, K to the motherfuckin I-M
Bout to shut yo’ shit down – other albums come out ain’t NOBODY gon’ buy them
Now who gon’ deny them? I’m scared of myself, don’t nobody wanna try Kim
Y’all know you done fucked up (now whassup – y’all better come roll with us)
Who’s you Mister? It’s Lil’ Kim and Twista (and we about this)
For those who doubt this, the game is ours (we gon’ run you up out this)
What a wonderful feeling when you’re stealing a million
But the billion jackpot’s what I aim for
Get your hands in the air, put ’em up, keep ’em high
Don’t want no problems – JUST GIMME WHAT I CAME FOR!”

For the most part, big guests don’t dominate the album. Even though 50 Cent shows up for “Magic Stick,” Styles P blesses the Truth Hurts “Addictive” type beat on “Get in Touch With Us” and Full Force produces and performs on “Can’t Fuck With Queen Bee,” Kim’s star shines as bright as it should on her own shit. And where “Notorious K.I.M.” had problems with inconsistancy (great songs sandwiched between mediocre ones) “La Bella Mafia” does not have this problem. From the Swizz Beatz blessed “This is Who I Am” to Kim’s self-produced “This is a Warning” (a suprisingly ill interpretation of R. Kelly’s “A Woman’s Threat”) to Shaft’s work on “Heavenly Father,” the level of dope remains the same. And appropriately enough, Kanye West closes things with “Came Back For You”:

“I’m back on the scene, my favorite color’s green
I’m buldin an empire, got a whole new team
Pimp game strong, rap’s is just harder than they
EVER BEEN – YOU COULD NEVER WIN
Made my way through Hollywood, fashion world adores me
Music’s my first love, a nine to five bores me
Love me or hate me, Lil’ Kim come through
My fans across the world, I came back for you”

Presented in it’s entirety, “La Bella Mafia” lives up to the expectations of her fan base after three years during which pretenders to the throne all claimed to be hotter, badder, or nastier than Kim. The most pleasant surprise may be that although Kim is still so bold she could make Luther Campbell blush, she devotes more effort this time around to a well rounded album of party rap, straight up mic skills, and lyrics about hustling to stay on top. She shouldn’t have to hustle too hard though, because like the Don that she is “La Bella Mafia” will keep Kim on top of the rap game for the spring, summer and beyond.