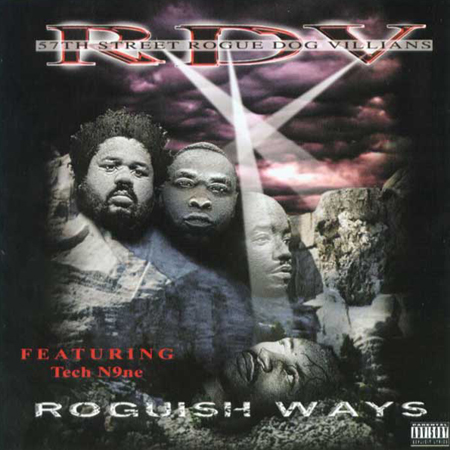 When you’re an unknown group trying to get heard, having a name as long as “57th Street Rogue Dog Villains” is probably your biggest handicap. Someone should tell them to shorten it up to just “57th Street” or just “Rogue Dog Villains,” but the group undoubtedly has an identity crisis with or without the name when the blurb “featuring Tech N9ne” on your cover is the album’s biggest selling point. Don’t get it twisted, I’m a big fan of Nina and I still think “Absolute Power” was unfairly overlooked by most rap critics because he’s from Kansas City, but facts is facts – he IS overlooked. Therefore, if you’re an unknown and you’re using association with him as a selling point it’s probably not going to work, since he himself is still largely unknown outside the Midwest.

Still in all, “Roguish Ways” is not without hope. Unlike the Mount Rushmore monument they imitate on the cover though, these rappers are relatively faceless and anonymous; especially presented as an entire group without the chance to be introduced to them individually. For the record, they are Bakarii, Big Scoob, Txx Will, with production by Kev and the Boogie Man. The title track that starts out the album is done by the later, and has a stuttering rock riff which serves as a nice platform for the group to “earn G’s, and ki’s, from pushing units.” One member in particular stands out, probably from some expert Tech N9ne tutelage. He has a deep and threatening voice, and can flip long sets of syllables: “Subterranean dirty derelict heretic dialect spoken with death in my tone, quit bein a bitch and c’mon, it’s on!”

Still, is it any surprise that when Tech shows up, the album’s dopeness goes up a notch? The Kev and Icy Roc co-produced “Thong Thissle” is a perfect example – it features a Troutman style vocoder, an appropriately bouncy bass, and guest lyrics from Nina and a sultry female named Sundae guaranteed to heat up the spot. “King Song 2002 (Still Gettin Fucked Up)” though is the next level beyond THAT and features another guest rap by N9ne:

“(F-U-C-K) Every day all day ’til the day I dieeee
(F-U, she say) Cause a nigga like you don’t keep her higgggh
(Now I got yo’ bitch) Kickin it with Nina and you wonder whyyyy
(Cause I got mo’ dick) Hit it from the back I’ma make her lie
(About where she’s been) And then maybe later on we can gets blowed
(And bring 3 friends) They can be women or bitches or hoes
(I don’t care what kind) Fuckin with a Villain baby anything goes
(Still don’t spend a dime) If you think I’ma trick some dough
(Y’all don’t know Tech N9ne)”

Party songs like these were a good idea. Doing a cover of “Gangsta Gangsta” in the form of “Rogue Dog VillN.W.A.” was not. The beat can’t hold a candle to the original (it’s a paltry and damn near pathetic imitation) and the raps which would be better presented on their own sound incredibly weak compared to Ice Cube verses recorded over a decade ago – and that’s a BIG problem. Fortunately, that’s the worst mistake on the entire CD. Hard beats are in general the highlight of this CD, and compensate for the relative anonymity of the crew sans Tech. “We Came to Party 2” will bounce Jeeps, “Look in My Eyes” is a smooth song where the words “I tried peaceful man but peaceful just don’t pay the bills” is words a lot will relate to, and “Just Like My Brotha” is a bluesy funk jam which may inspire comparisons to Bone Thugs-N-Harmony.

There’s no getting over the fact though that the 57th Street Rogue Dog Villain are for the most part spitting generically thuggish raps, despite better than average production and their Tech N9ne connection. The problem with “Roguish Ways” is that while it’s pleasant to listen to, it’s in no way as memorable as any of Nina’s own classic albums. For better or worse, an instrumental version of this album would be just as interesting as the original – possibly more. If you can find this cheap though (such as at a Wherehouse Music clearance sale for $5) it’s still worth picking up though, just for the beats.