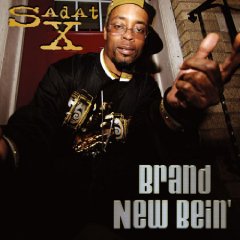 Brand Nubian’s acceptance as an essential rap act is, even today, pretty universal. Edgier than their Native Tongues contemporaries and a little underground in comparison to some chart-topping neighbors, the New Rochelle trio put a new spin on the growing hip hop game with their seminal 1990 debut “One for All,” an album that balanced sociopolitical thought and Five Percent Nation theology with technical excellence, great beats, and, perhaps most of all, a lot of fun. Even as the group splintered into episodic solo careers and reunion efforts, they managed to maintain a great deal of respect from fans and fellow MCs alike as they continued to release an impressive catalog of music including classic singles and albums.

Between the in-your-face styles of leader Grand Puba and the understated cleverness of Lord Jamar, Sadat X was always the star of Brand Nubian to me. For one thing, his delivery is one-of-a-kind and still strikes me even today, with an unmistakable nasal voice, eastern New York accent, chatty drawl, and punchy, off-kilter flow that made the stuff of many an ideal guest verse. But more than that, Sadat was lyrically superb and balanced, maintaining a social agenda advocating education and justice. Still, his energy was simply remarkable, and time and again he proved capable of ripping just about any beat on punchlines and charisma alone. A quintessential East Coast MC, Sadat seemed to be the glue behind Brand Nubian as they progressed from pioneers to militants to veterans.

2009’s “Brand New Bein'” was his second album in six months following a stint at Rikers on gun charges and the largely unheard “Generation X.” Like his last few efforts, promotion was minimal, which is unfortunate given his legacy but perhaps to be expected. While the clever title might indicate a rebirth of sorts, for the most part it finds him doing what he has done best for twenty years. Neither as insightful as 2005’s “Experience & Education” nor as personal as 2006’s “Black October,” “Brand New Bein'” finds him comfortably delivering thoughtful rhymes concerning his beloved New York, old school hip hop, the current rap game, and his position as a gracefully aging MC. An extensive guest roster includes such legends as C.L. Smooth, KRS-One, Rahzel, Craig G, Buckshot, Puba and Jamar, and C-Rayz Walz, as well as a number of no-names who are none too impressive.

The beats, supplied entirely by Rocksteady Crew DJs JS-1 and JW, are serviceable if not spectacular. Some are much better than others, and the weaker beats sound too mechanical.

The gem of the tracklist is the second song “Nuthin’,” a C.L. Smooth duet. After a fiery sixteen from the Mecca Don, Sadat clocks in showing he’s come to play:

“There’s nuthin’ you can say about X
Sadat X the great, the godfather
See I’m up on Broadway with the O’Jays chilling
I might not have had a top billing, but I’m straight
I’m cool for travel, the passport is a past cause
there’s nuthin’ anyone can say
You want to go to gunplay, I don’t think you want that
We keep the burners but we don’t flaunt that
For eight months I was laid up in the New York jail
Only contact by the phone or the mail
They didn’t give a nigga bail but I handled it
Came home, ate dinner with my baby, it was candle lit
No parole, the â€˜Dat stay ready to roll
JS, hit these niggas with that soul
I’m never too old, I won’t stop till I pop
Can’t we get past this radio slop?”

Still, the real star here is JS-1, who provides a rich, moody beat with a distant female vocal sample and a snarling live tenor sax, textured with layers of pipes, light guitars, and smooth percussion. Another version turned up on JS-1’s subsequent release “No Sell Out: Ground Original 2” with a Brother Ali verse added for good measure.

A particularly spirited KRS-One and Rahzel show up for “Blow up the Spot,” which is heavy and enjoyable boom bap fare, and Buckshot guests on the breezy, string-laden “Bullseye,” another winner. The title track, a Brand Nubian reunion, is strong both musically and lyrically, and the closer “Smallest Violin,” a sinister tag-team with Craig G and Jak D, is a highlight.

The biggest problems with “Brand New Bein'” lie in that Sadat is definitely stuck at least a few years in the past. Even if you agree with the nostalgic sentiments of “Goin’ Back” or the yearning for pure lyrical rap on “Lyrics?,” they don’t compensate for the fact that you’ve heard them before. On other tracks, such as the awkwardly disjointed “Go Slow,” it sounds as if he’s been hanging out too much with a grumpy KRS-One. JS-1 and JW’s weaker beats are brought to the forefront on these songs, and his young guest rappers do him few favors. Some songs just don’t seal the deal: the street posse cut “Unforgettable” is in fact quite forgettable, and “Teach the Children” is strong lyrically but horrid sonically.

I would have liked less conventionality and more introspectionâ€”it’s noteworthy that after the impending doom of “Black October,” there are only passing references to his incarceration. “The Natural” almost heads in that direction but ultimately doesn’t accomplish much. Then again, maybe that’s part of the “Brand New Bein'” that Sadat’s going for; it’s in his past and he’s moving on.

In case it’s a deal breaker, it should be noted that the package contains a bonus media disc with instrumentals, a cappellas, radio edits, and other assorted goodies for the DJ-minded, which would probably warrant a physical purchase rather than a download.

“Brand New Bein'” is solid yet predictable; a straightforward compilation of New York hip hop, often reminiscent of what many consider the “golden era,” that takes few chances. It’s got some enticing collaborations and a few sure bangers, as well as its share of misses for its hits. While it won’t win him new fans, his listeners will be pleased that Sadat continues to offer authentic and wholesome rap for the thinking man. At times great and others underwhelming, this LP indeed showcases a unique man at an interesting time; a hip hop pioneer who has both spent time as a teacher in New York’s school system and done time as an inmate in New York’s prison system, keeping up with a swiftly changing music and maintaining quality we’ve come to expect. And for all this, he upholds his self-proclaimed title as “The Great ‘Dat X.”