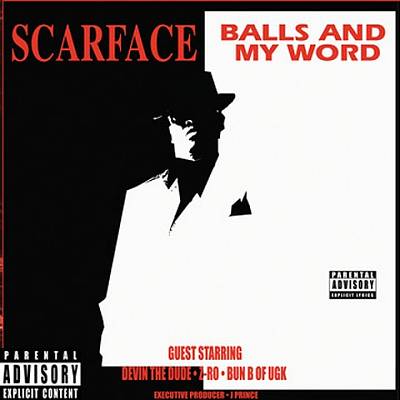 Scarface :: Balls and My Word

Something’s not quite right here.

Don’t get me wrong, I’m always happy to see a new Scarface album in stores. “The Fix” was even the RapReviews.com staff pick as the best album of 2002, so there’s no shortage of love here for the Southern rap impresario. However, various things about this album just don’t add up – when you put two and two together you keep ending up with five every time.

First, this album appeared very quietly on store shelves last week – so quietly it wasn’t advertised in any television commercials or featured in Sunday periodicals as “on sale this week” at major retail chains like Best Buy. Considering he is both the head of Def Jam South and one of it’s most popular artists (he even appears in Def Jam Vendetta

) the total lack of promotion makes NO SENSE what-so-ever. When you realize that this album is on not on Def Jam South though it starts to make sense; when you realize it’s on his former label Rap-A-Lot Records it makes even MORE sense. Notoriously stingy when promoting albums or paying for album inserts (and this CD features Rap-A-Lot’s typical unstapled one sheet liner notes folded in half), it’s hardly surprising they would treat ‘Face the same.

“Why would Scarface go back to his cheap-ass former label after leaving them behind for the comfort of an executive’s chair and big time stardom at Def Jam?” Good question, I’m glad you asked. Unfortunately, the album’s title and opening track only raise more. “Balls and My Word” was a track from the 1988 Geto Boys album “Making Trouble,” at a time when calling them obscure would have been an understatement. In fact, Scarface was not even a featured member of the group at the time, nor does he appear on the song then or now on it’s re-release. The entire song is samples from the movie “Scarface” starring Al Pacino as drug lord Tony Montana. In his early career Brad Jordan was known as Akshen, and adopted the alter-ego Scarface when he joined the Geto Boys and recorded a song of the same name on “Grip It! On That Other Level.” Whether he was inspired by that song, or the movie itself, or both is unknown. Clearly though, Rap-A-Lot is trying to cash in on both associations – the album’s cover is even a parody of the famous poster for the film seen on both the VHS and DVD cover of the home release. Leading the album with the song underscores this point, and since Mr. Brad doesn’t appear on it they don’t even have to pay him a dime in royalties.

They’ll certainly have to pay all the guests that appear throughout this disc though. Z-Ro appears on “On My Grind” and “Bitch Nigga” (which also features Bun B of U.G.K.), Devin the Dude and Tela appear on “Only Your Mother,” and Tanya Herron croons on “Dirty Money.” The album doesn’t give us any information about when these tracks were recorded, so we can’t tell if this is how the songs were originally recorded or if the guests were added after the fact like Nas and Trick Daddy appearances on a Tupac album. There’s certainly nothing to indicate that these are newly written and released ‘Face songs though – and again no reason to believe he’d go back to Rap-A-Lot just to release an unpromoted, poorly packaged disc of new music. Whether these are new songs or old tracks out the vault though, there are definitely some gems. Scarface’s reputation as an unparalleled kingpin of the hood is legendary, and songs like “Recognize” live up to that status:

“Fuck the champagne sippin, wood grain grippin
I’m spittin for the Vice Lords, gangstas and Crips
and Bloods, in everybody neighborhood
From the Ida B. Wells, back down to Inglewood
How can a nigga from the South get a pass in every section
And walk the projects with no protection?
Be surrounded by a mob, and not get robbed
Considered to be a savior, and not be God?
(Whoa now!) Listen to that nigga flow now
I can speed it up or slow down
Face the facts baby, I got it locked like this and like that baby
Southern rap rock baby”

Standouts include the N.O. Joe funkdafied “Stuck at a Standstill,” the somber Mike Dean production of Scarface’s cautionary “Make Your Peace” and Sam Sneed’s stylish G-Funk on “Fuck’n With Face.” The best of these tracks would be meaningless without Scarface though – it’s his presence that makes them pop. Still, the musical sound as compared to “The Fix” sounds out of date, like a journey through Rap-A-Lot cliches. Now all things considered that’s not such a bad thing either – even though Rap-A-Lot may be a cheap ass label, they’ve still put out some of Southern rap’s greatest classic rap albums over the last decade and a half. This is a good Scarface album whether you’re a long time fan or just now discovering him from his ties to Def Jam, but the fact it’s not ON Def Jam leaves more questions unanswered than answered.