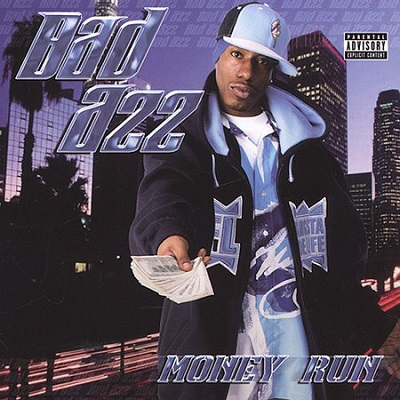 Not one to let the many obstacles on the course get him down, Long Beach rapper Bad Azz is at hole number 3 trying to reach the green with one shot. Last time around he was signed to Snoop’s Doggy Style Records, for “Money Run” he has moved on to a label with less star power but with Bayside distribution nonetheless. This means it’s all on Bad and his crew to make sure this money run completes itself successfully.

This time, the main guy in charge is Sacramento’s Big Hollis, who handles both the project’s executive as well as musical production, the latter apparently all by himself. The pitfalls of one single guy producing an entire hip-hop album nowadays are evident: either your style is not varied enough to appeal to enough different audiences to make your record a success, or you get lost in unknown territory when trying to head into as many musical directions as possible. On “Money Run”, there’s just one song that falls into the latter category, but it’s painful enough to witness Big Hollis going after the Neptunes formula on “Checking All the Spots”, right down to the Pharrell-style falsetto.

Other than that, “Money Run” has no difficulty covering all bases from club to street to radio, without ever neglecting the knock factor that is so important for today’s too-rare LA albums. Bad Azz rides these beats with the usual ease, his lively voice always expressing a real care for the subjects and topics of his rhymes. Even at his most materialistic, Bad Azz makes you feel that it’s not ‘all about the money’. He may rival Cash Money’s #1 Stunna Baby in “If it’s Hot”, but you can easily catch him putting it all in perspective under a song title (“It’s a Party”) that seemingly would deal with other things:

“Money, houses and cars, clothes, hats and shoes
hoes, gats and jewels, those that you lose
Fuckin’ with his earnings’s how the world get to turnin’
Niggas die over other people money, we ain’t learnin’
Paper probably pay you, but people gonna hate ya
plus paper’ll hurt you and have somebody kill you
Look at how the real do, will we ever make it through the storm?
Because of last night I don’t watch the news in the mornin’
Last week the cops shot some little girl
it gave a drug dealer a chance to put some dope in the world
Since I talk about this shit they wanna come and shut me down
It’s all political, like I had teflon rounds
If they cop killers give ’em all death by injection
if they kill each other not to give a fuck is they profession”

A thumping soul-stirrer, “Ghetto”, introduces Bad Azz as the West Coast version of Talib Kweli, from the conversational flow to the chalky voice to the unnerving look at inner city life. “My Street” has a similar theme, but seems a bit too much formatted as a tearjerker. But unlike other albums in that genre, “Money Run” isn’t a double-edged sword. In the 2K3, “the little homie Bad Azz” is a rapper, nothing more, nothing less. His job is to make dollars and sense out of what he’s experienced and witnessed. Bad himself is trying to stay out of trouble as best as he can:

“The only way that we not drinkin’ if it ain’t no sto’
but it is, so we be off the Bellview out the bottle
if it ain’t the cranberry, we mix it with pineapple
Don’t get too drunk cause when bullets is flyin’ at you
when you try to run you feel too clumsy and you stumble
get trampled, now you wind up an example
In here that’s just the kinda shit we adapt to”

But despite the occasional pause for thought, “Money Run” is first and foremost a CD to be ‘played at high volume, preferably in a residential area,’ to quote a famous “Chronic” skit. The intro is near-perfect, pressing you to go out on a money run yourself, “Do the Damn Thing” thumps like it has built-in hydraulics, “If it’s Hot” and “Money Run” knock as hard as any Daz production, “California Sunshine” plays effectively on Suzanne Vega’s “Tom’s Diner”, “Come and Get It” and “It’s a Party” are g-funked up but still pass for R&B joints. Everything has a polished finish to it, the guest appearances are mostly limited to his longtime Low Life crew, and at 45 minutes the CD is not too long, making “Money Run” a more transparent experience than its predecessor. One thing has suffered in the process, and that is Bad’s lyricism. Instead of stepping it up another notch, he retracks to the more simpler forms of lyric writing that are currently dominating the airwaves. Only rarely does his songwriting talent reveal itself, such as on “Groupie”, where you feel he’s being prevented from penning an insightful song by the guest rappers unnecessarily taking up space. Assisted by singer Terrell Carter exposing some girl as “just a money-hungry, gold-diggin’ groupie” who’s “kinda cute but she don’t utilize her beauty,” Bad Azz raps:

“This house was purchased for the purpose of a home
you can ring here when you don’t got no place to go
See, you make a house a home; it’s just a simple place
without the love here, shit is just a empty space
And you think that I think you so into us
but I can see it in your walk, you’re so promiscuous”

Although the wheel of West Coast rap certainly hasn’t been re-invented here, it keeps rolling as smoothly as ever.