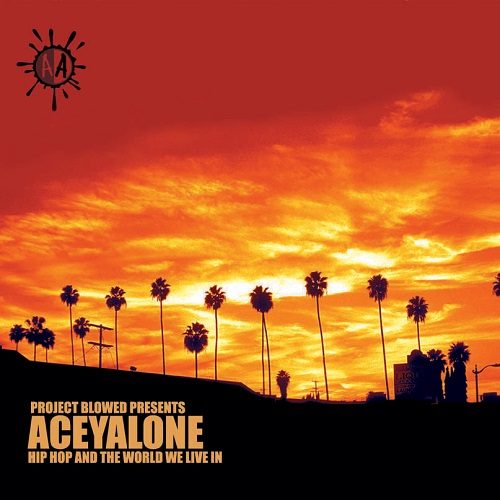 Aceyalone :: Hip Hop and the World We Live In

The short list of “best lyric writers in hip-hop” varies greatly depending on your perspective. If you listen to Hot 97 or an equivalent “where hip-hop (allegedly) lives” radio station and watch nothing but Direct Effect and Rap City, you’d probably say 2Pac, 50 Cent, B.I.G., Jay-Z and Nas. Nothing wrong with that list really, except for the fact it dominates the discussion whenever the topic comes up epitomizes the disconnect between commercial and indie rap. A whole generation of MC’s who are equally as gifted (if not more so) yet not signed to Atlantic, Columbia, Def Jam, Interscope, MCA et cetera (or even worse self-distributed) continue to get overlooked. Ask an underground hip-hop fan who’s on their short list, and you may get a couple of commercially successful artists like Andre Benjamin (OutKast) and Jigga, but you’re more likely to get a list of names like Wildchild, Cadence, Ras Kass, PackFM and Aceyalone.

Aceyalone is practically synonymous with lyrical excellence to the indie world, and practically invisible to any top 40 urban music rotation. Ironically enough his career started at Capitol Records, a label synonymous with crossover rap sensations like the Beastie Boys and MC Hammer. For a rapper who dubbed himself “Mr. Outsider” on his solo debut “All Balls Don’t Bounce,” it was an ill-fated match. The album sold poorly, the record quickly dropped out of print, and the contract was clearly not renewed for another LP. Without realizing it at the time, Capitol had not only fulfilled Q-Tip’s “industry rule #4,080” prophecy but created a legend at the same time. College DJ’s who didn’t already know the rapper from his pioneering work as a member of the Freestyle Fellowship got those promos from Capitol and said, “Have you heard this cat Aceyalone? He’s an INSANE lyricist.” Those late night spins and hip-hop mixtapes may not have sold copies like getting your name and face on BET does, but it did cement the voice and style of one of rap’s most unique lyricists into open minds among a nation of millions. Thus began phase two of Aceyalone’s career, pairing his solo records to underground distribution through labels such as Project Blowed Recordings – a label named after an underground compilation he shepherded into the indie rap world spotlight. They may not be easy to find at Sam Goody retail outlets (they do have it online) but rest assured you can buy them at Amazon

The pattern since then has become almost predictable – releasing albums like “A Book of Human Language” and “Accepted Eclectic” that are critically acclaimed but obscure to the dominant majority of the hip-hop world. Should Aceyalone be featured on the cover of XXL or The Source? If the criteria was twisting the written word into oratorical bliss with super-human breath control, using both a brilliant mind and a mesmerizing voice, he’d be on the front of these periodicals and Rolling Stone to boot. “Hip Hop and the World We Live In” is another album born in this mold. He twists pop culture into his own inventions, changing films like “Fight Club” into a lyricist’s “Art Club” and rap catch phrases like “Bling Bling” into “Blink Blink.” If this seems too superficial, songs like “I Think I Know Too Much” deal with the profound human dilemma of self-awareness, including our own mortality:

And clearly, it’s Aceyalone’s intent to capture that truth like lightning, convert it into “Organic Electricity,” and deliver it to our ears through music. If the point wasn’t already clear, he bends his voice electrically after each pause to make sure we hear:

Clearly there’s no doubt about Acey’s self-confidence, nor his intention to make rap songs that don’t center solely around punchlines before the next rhyme. His disdain for the mundane becomes plain on songs like “Bigger They Come”:

“Mr. Big Bad Mouth Man don’t know when to stay quiet
Always talkin bout how he can’t be beat, but I don’t buy it
Come try it, no one man is a riot, seek the head and fly it
Man against a giant, David against Goliath, I shall triumph
Hold down the fort, hold ground with a fo’-pound
Pronoun in case it go down, cause people are just so low down
At the showdown, the faster he go the harder it is to slow down
Is it my town or yo’ town? Can’t nobody hold me down”

With a rapper this fresh and concepts this dope, songs like the funk-slap silly rap of “Not When You Get Down,” the braggadocious bass boom of “Jack of All Trades” and jazzy instruments of “Rapps on Deck” wrap his gifts up in a package for all to enjoy. Sadly, the only drawback to this album is it’s producer Elusive. Though he strikes the right notes on about half of the songs, tracks like “Dirty Birdie” and “Scribble on a Clean Surface” are functional (read: not whack) without being interesting or doing the raw power of Acey’s linguistic abilities justice. When you’re Aceyalone it may be impossible to find any producer who can perfectly capture that vibe, but “Accepted Eclectic” succeeded precisely by not pairing the versatile MC with just one sound – everyone from Evidence to Fat Jack to Joey Chavez got down with his sound. To call Elusive untalented would be a lie, but to call him monotonous as the sole producer of 14 straight tracks would be the truth. You may find yourself skipping songs like “Say” and “Shooby Dooby” after repeated listens. In some sense the beats are trying TOO hard to be indie, when even Acey himself recognized on the last album the value of beats like Ed O.G.’s “I Got to Have It” and paid tribute with a funky remake.

“Hip Hop and the World We Live In” is another album that will keep Aceyalone’s loyal hip-hop audience pleased. There’s no deterioration of his scripting words that cover a wide range from surreal abstraction to concrete every day reality, and unlike so many other MC’s he clearly recognizes that the WAY you say words is just as important as WHAT you say, making him as much a beat poet as a rap artist. Aceyalone needs so little improvement in these areas, the album’s only clear flaw is that the soundtrack is too static for a mic controller that’s so dynamic. Last time around, we got to hear a glimpse of what it would be like to pair an underground rap sensation with some of underground rap’s best musical maestros, so what “Hip Hop and the World We Live In” really does is tide over the audience until something akin to an “Accepted Eclectic 2” comes along. Let Elusive do a few tracks (he’s dope in small doses) but spread the wealth around, and for the love of God please call DJ Premier to do a beat – we deserve it.

Aceyalone :: Hip Hop and the World We Live In
8Overall Score
Music6.5
Lyrics9.5