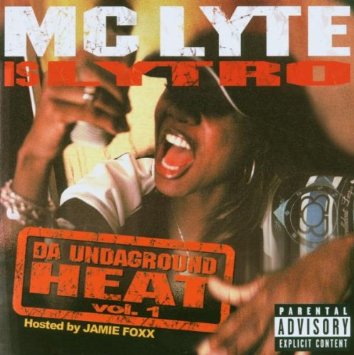 I got love for MC Lyte. You got love for MC Lyte. If you don’t, you should. How could you not have love for a woman who maintained her self-respect and earned the respect of others in this man’s world? Who was an essential part of the often referred to golden age of hip-hop? Who released six studio albums and one greatest hits collection? Who always came different but kept the focus on lyrical expression every time she came back?

Well, one way you might end up refusing giving MC Lyte her due props, is getting introduced to her through her mixtape-styled “Da Underground Heat Vol. 1” CD. It’s good to see that this long-time professional finally gains full control over her career by going independent and uh, underground, but judged by its aim, to spark a buzz for our heroine, the project clearly misses its mark. Lyte stoops down from her pedestal and makes believe that she joined the ranks of the unsigned, up-and-coming MC’s who have yet to prove themselves. The question is not whether or not someone with a high profile like Lyte can seriously go back ‘underground’, the problem is that most songs here have nothing but the name Lyte going for them. Or is it Lytro now?

Many people remember MC Lyte. In the past few years, Common had her on “Like Water For Chocolate”, Will Smith had her on “Willennium”, Erick Sermon had her on “React”, Moby had her on “18”, Erykah Badu had her in her “Love of My Life” video, and Public Enemy had her on the “Dark Angel Theme”. Will Smith was even going to sign her to his Overbrook Entertainment, something which never materialized after Interscope backed out of a distribution deal. Today Lyte has her own company, Sunni Gyrl Inc., and is in need of some publicity. Hence this quickie. The BMG-distributed project was recorded in just four days at Jamie Foxx’s Foxx Hole Studios (which explains the ‘Hosted by Jamie Foxx’ tag attached to it).

On the musical side, Lyte enlisted a production team called Maad Phunk! who brings absolutely nothing new to the table. Even worse, their beats are a crude mixture of styles producers such as The Neptunes, Nottz and Rick Rock displayed several seasons ago. It’s sample-free, mechanical club music that is so formulaic it inevitably evokes clone comparisons. Like most clones, it looks the part, but soon enough reveals fatal flaws that are guaranteed to cut its life short. What made Lyte think that these beats would do when not even a Neptunes-produced lead single (“I Can’t Make a Mistake”) saved her last album from obscurity, remains a mystery.

Lyte herself flows as impeccably as she always does. Yet what she delivers feels watery and washed out. Fans will take delight in the various stabs at today’s female elite (the most poignant being: “I inspired you? Come on now, no way / dead that rumour, the consumer won’t believe it anyway”), but even they will notice the lyrical decline when they witness her quoting some of her famous lines from days past on “God Said Lyte”, one of the better cuts. Or when they hear the generic chorus of “Bklyn (Live That)” and think of verified Lyte BK anthems, from 1988’s “Kickin’ 4 Brooklyn” to 1993’s “Brooklyn”. Now THAT was heat…

It’s sad indeed to hear her proclaim “I put it down for the niggas in the street with no deals / walkin’ on they feet with no wheels / headphones, knapsack, and they keepin’ it real / Lyte still got the avenue locked and sealed,” and actually wishing it would be true, wishing Lyte had come back with some type of underground heat instead of these duds. Not every track is as bad as the pseudo-steamy “U Got It” where she does an embarrassing Missy Elliott-impersonation. On “Fire” she duets with fellow female rapper Neb Luv (remember her from Warren G’s 5 Footaz?). “U Can’t Stop It” and “Supastar” pair her with two recent rhyme slingers, Lee Majors and Hot Dyse. Admittedly, it is kinda cool to hear her spit with regular cats and hold her own.

These tracks are good for what they are. Unfortunately, what they are is not much. Ironically, the only track that’s album-worthy is her foray into traditional mainstream R&B, “Where Home Is”. Jamie Foxx does an okay job crooning the hook and Lyte describes a mature relationship, showing off some of the songwriting skill she was known for. After all, for “A Film Called (Pimp)” and “Dark Angel Theme”, Common and Chuck D both made her write from a designated perspective. Not many MC’s will get assigned such a task.

Arguably, “Da Undaground Heat Vol. 1” is not about high-brow concepts, it’s about getting heard. Lyte has some of the bases of contemporary hip-hop covered, from synthetic beats to melodic choruses. She also fires some lyrical rounds at her comp:

“Lyte and Maad Phunk!, we flamin’ on
Took a vacation, some of them came and gone
When I push beef, it’s like filet mignon
Tender as I serve these loose rappin’ broads
She’s sellin’ straight up sex by the seashore
We bang beats from Boogie Down to BK, New York
I sport the finest of wears, Your Highness is here
End your rhyming career”

But apart from rare highlights like these, her verses lack the cohesiveness of her earlier work, eventually causing her to fall behind the very competition she calls out. Stay tuned not for “Da Undaground Heat Vol. 2” but for a regular album, hopefully one that is based on wiser decisions.