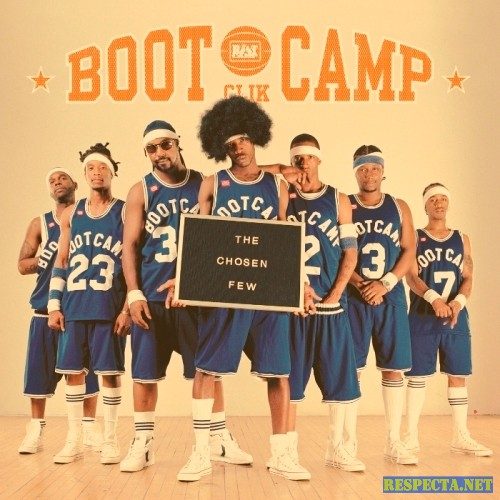 Five years went by from the time the rap collective known as Boot Camp Clik put out “For the People” until “The Chosen Few” was released. During that time, Buckshot, Cocoa Brovaz, and Originoo Gunn Clappaz all released albums which may have found favor with loyal Boot Camp fans but certainly not with the promotions department at Priority Records, who buried any album they made to the point that Buckshot released “The B.D.I. Thug” independently. Members like Heltah Skeltah found out the hard way that street credibility doesn’t always equal album sales, and became so disillusioned after the poor sales of “Magnum Force” that they disbanded.

Buckshot isn’t giving up on his crew though. He remembers the acclaim that Black Moon had when he first came out, how Evil Dee blew up the radio, the hot debuts of Heltah Skeltah and O.G.C., cameos on Funk Flex that kept the streets buzzin, and how his crew was one of the first to successfully exploit the internet through their Duck Down website. The posse may be a little smaller today, but they’re just as committed to their vision of keeping New York rap hard as the concrete they walk on. Enter “The Chosen Few,” a band of brothers who are as lively as they are opinionated. Over the Curt Cazal produced “And So,” Tek pulls no punches saying that like the rest of the Bootcampians, the Cocoa Brovaz ain’t going nowhere:

“I do what I do like I do for the hood
Pop tools pop jewels burn backwoods
(And so) Slay DJ’s who think they untouchable
Renegade, never been afraid MC’s get it too
(And so) The moral of the story is this
I used to shake it off but this time, suck my dick!
(And so) I’m from B.K. home of Big and Aaliyah
Watch how the pound or the four-fifth leave ya”

Sean Price, the artist formerly known as Ruck, pulls no punches on his following verse:

“(And so) I guess I’m back where I started
Open up for Buckshot and just rappin retarded
(And so) I hate the life that I’m livin, I need it
Don’t believe me ask my wife and my children
(And so) See I’m back on the street, packin the heat
Royalty checks equal to crack in the street
Niggaz like, ‘Fuck crack, Ruck rap to the beat’
I’m like, ‘Aight, I’ll be back in a week'”

And so, the strength of the Boot Camp begins to shine – good individually, but as a group bringing the best out of each other. Buckshot sums it up nicely:

“(And so) The saga continues
The motherfuckin drama continues
Buck brung a bomb to ya interview, and blew up the main topic
‘What’s up with Boot Camp Clik son? They ain’t knockin
They ain’t hot and, ain’t droppin the now topics’
But listen nigga, this is how I pop shit
I don’t mean Moet corks, when the poet talks
Every line leave ya blind when the mind get lost
(And so) Rhymes enforced with action, cause everybody lookin like
‘Is they slackin, are they back in, what’s crackin?’
Nigga, I’m hip hop like the backspinnin
You could never change the fact that I did back then”

Although having this many quotes from one song is mildly excessive, it does illustrate a point – Boot Camp has little to worry about lyrically as long as the beats come right. As a result there’s no shortage of hotness – Alchemist produces “Let’s Get Down 2 Bizness,” Coptic does the title track and a snappy jazz bass for “Welcome to Bucktown USA” (featuring Scratch as the human DJ), Bink! dropping deep boom hits on “That’s Tough (Little Bit),” Da Beatminerz on “Had it Up 2 Here,” “Daddy Wanna” and “Think Back.” The biggest surprise may be Hi-Tek’s stellar bounce on “Ice Skate,” which gives all of the MC’s spotlight even though Buckshot may just be stealing it from them:

“You can ice skate, meaning bounce and breeze
Bounce, so leave, you could have a ounce of trees
Fuck fatigue, we white t’s, cut the sleeves
You gotta love it how we thug it with ease; oh of course
Buck the boss, toss molotovs in your Ford Explorer
You niggas ain’t raw, you poor
This is what you can’t afford, to keep dissin Buck thinkin I’m soft
Baby, I put it down when you was in drawers
I ain’t never say pause, fuck a fad, fuck the latest trend
I leave bodies where I lay this pen
And next time I gotta say this again
I’ma say.. exactly, not a lot but the gun’ll spray
Now go on and play”

In the pantheon of rap songs that epitomize the phrase “brutally beautiful,” tracks like these and the blaxploitation influenced “Just Us” carry the torch. Singling out individual tracks on the album may help illustrate why it’s so fresh, but like the members of the group these songs are themselves “The Chosen Few” in hip-hop. The slippy drawl of Starang Wondah, the burning intensity of Top Dog, Louieville Sluggah’s high pitched flow that pre-dated Freeway by years, the tough as nails raps of Tek and Steele, getting nice with the smooth Sean Price and following the smoky intensity of Buckshot proves that the strenth in the diversity of their collective is unparalleled sans the Wu-Tang Clan circa their 1993 “Enter the Wu-Tang” debut. If you were ever a fan of any of the members of this group individually or together, “The Chosen Few” won’t dissapoint. In fact the only ones who can be dissapointed are the group and their general Buckshot if it doesn’t go platinum. As a “hard” rap album with not much in the way of crossover material it probably won’t, but it’s still ghetto gold anyway.