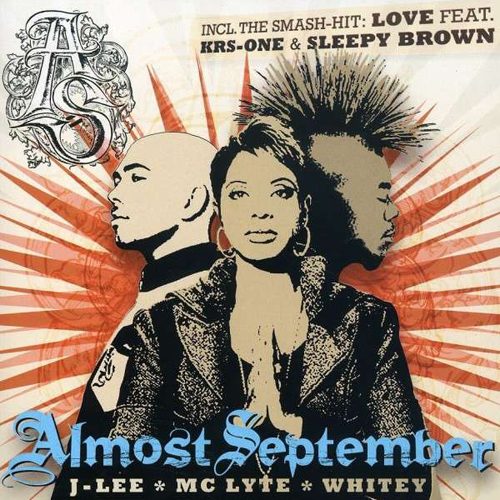 Almost September is J-Lee, MC Lyte and Whitey. Wait, did I just say MC Lyte? I meant – no, I really meant MC Lyte. Unlike other hip-hop heroes from times past the Brooklyn legend popped up every now and then, but Almost September is her most professional return since “Bad As I Wanna B” back in ’96. The Almost September project is the result of a chance meeting during the recording of Macy Gray’s ’07 album “Big.” The three hit it off immediately, which led to the spontaneous creation of their first song “Beautiful.” As a production/writing team (sometimes credited as Whiteleaf Productions), J-Lee (Jared Lee Gosselin) and Whitey (Phillip White) have brought you songs such as Cheri Dennis’ “Alright”, Chingy’s “Kick Drum”, India.Arie’s “Wings of Forgiveness,” or Floetry’s “I’ll Die.” While their extended list of clients is even more impressive, Almost September make it clear that this collaboration isn’t limited to one strategized song designed in a boardroom.

One thing about Almost September, they don’t try to be BEP or N*E*R*D. They don’t aim for the pop cutting edge, they put their trust in that sweet soul music, specifically the organic R&B-meets-hip-hop amalgam that’s been a fixture in ’90s and ’00s urban music. The theme of their debut EP is, quite naturally, love. What better way then to begin than with a song simply entitled “Love”? J-Lee and Whitey provide a beat that is as graceful as it is joyful with thumping drums, chopped vocal harmonizing, and sparsely deployed rhythmic strings. Wasting no time, guest KRS-One gets down to business in the first verse:

“Hell don’t see me, l-o-v-e
Hate, that’s easy, snakes come cheaply
I shake off the greedy and break off the needy
20 years strong and some still don’t believe me
The l-o-v-e, it helps me to be me
I love what I do, and I do it freely
Love, that’s how we gonna rise above
Hate in your heart will break you apart
Be love, pursue love, see love, do love
Old love, new love, show love – Ooooohh love!
We takin’ it to love, that sticky-like-glue love
PepÃ© le Pew love”

He passes the mic to Lyte for the second verse, but when he reappears for the third there’s no denying that despite solid contributions from everyone including guest singer Sleepy Brown, this is KRS’ joint. Even so, “Love” is a strong collective plea for the power of love, and that goes far beyond boy-meets-girl.

But romantics need not worry, “Beautiful” is just around the corner, where you’ll find Lyte introducing a player who forfeits his true love, seconded by the sung hook admitting, “Feels just like a stranger, lonely man in a crowded place / I’m so lost without her, just a fool who’s lost his way.” Next up, “Stay” features Lyte jonesin’ for a cutie-pie, sounding as sensual as Latifah ca. 1991:

“It’s all mental, rough but you’re gentle
You know what I been through and what I’m into
It ain’t accidental, so on point that God must’ve sent you
Man of my dreams and you must be akin to
Morris, or Boris, or even Denzel
You got me, so now how can I tempt you?
Let’s get intricate or we could keep it simple
My approach ain’t meant to offend you
For keeps? Not? Tonight you’ll be my rental”

She gets more persistent in the second verse, making the song a well-rounded affair. On “Infatuation” she uses what she got to get what she wants, and as you would expect from a rapper, what Lyte Thee MC got is the gift of game: “I get what I want when I get in his head / A closed mouth don’t get fed.” She’s backed by Mika Lett (featured vocalist on Diddy’s “Special Feeling”) and J-Lee, who also contributes a rap.

Fittingly disrupting the flow, “Revolution” is a (comparatively) aggressive, post-Katrina, pre-Obama political diatribe starting with “Reciprocity – 40 acres and a mule / It’s hipocrisy, and I’m tired of your bull / You keep tellin’ me, my people and my family / you’re gonna get to me, rescue me, make us a priority.” The vocally rich chorus combines an honest plea with pop appeal and the song is concluded by scratches from “Public Enemy No. 1”, making this a serious effort, despite the clichÃ© “The revolution will not be televised” ending of both Lyte’s and J-Lee’s verses.

Without being nostalgic, “The Almost September EP” possesses a timeless touch, which is what you’d expect from the collaboration between young Grammy-nominated and -winning producers and a rap pioneer who always kept in touch. The thoroughly optimistic sounding “Fly Away” is on some Big Daddy Kane “I’ll Take You There,” depicting a utopia “where grass is green on both sides (…) gangs don’t bang, they just hang / a place where you never hear gunshots ring (…) people use manners, ‘Excuse me,’ ‘Please,’ ‘Thank you’ / No one on the ground with cuffs upon they ankles (…) and cops, they love everybody in hip-hop.”

The current times are both a blessing and a curse for Almost September. On one hand, they allow up-and-coming musicians to team up with an industry veteran (and vice versa) and make the music they want to. On the other, these songs have been available digitally since 2008 but beyond the initial warm reception for the group didn’t generate the response befitting the quality of their work. It took a European CD release (with “The Best Day” as an addition) for me to even take notice. I’m glad I did. Looking forward to the album.