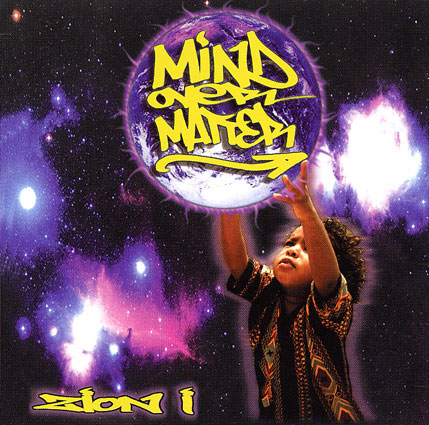 Zion I :: Mind Over Matter

In an industry caught between the washed out raps of the mainstream to the underground rappers trying to educate and elevate, they all have one thing in common: anyone can drop an album. Simply compile a collection of 15 or so of your best songs and you’re made. Rarely, though, an artist releases an album that is more than just songs, more than just 15 tracks strung together aimed at making as much money as possible. To create something that a listener can totally immerse themselves in for 75 minutes and leave them both musically and intellectually satisfied. To push the boundaries of all things music. To release, not just an album, but an experience. Zion I: Mind Over Matter is an experience.

Zion I is the duo of MC Zion, vocals, and Amp Live, who handles the production end. Duos similar to these are not uncommon, but none seem to feed off each other as well as these two. Amp Live creates some of the most futuristic, electric, soulful sounding tracks to rhyme on that I have ever heard. Mixing together everything from piano chords to string riffs to Arabic sounding flutes, Amp Live creates easy-to-listen-to, drum-and-bass style beats that could sell themselves without having a word said. But, words are said and very impressive words at that. MC Zion is poetry in motion. Blending his experiences on the streets of Oakland, society’s harsh reality, and the role that hip-hop plays in it all, he crafts conscious verses that any listener can connect with. All of this is fluently preformed with such versatility that at times it will go unnoticed. His ability to simultaneously switch pace, inflection, and pitch is effortless, while staying very easy to listen to throughout the entire album. Another thing you will notice as you listen to this album is quality. Never have I heard such consistency in the clarity of an album and it almost gives the surreal feeling that you’re in the studio as they’re making each track (Thanks to 418Hz Productions and DJ KJ).

The journey through Mind Over Matter begins with “Creation”, an eerie, one minute track featuring the reading of Genesis 1:1-3. This intro track ends with the line “and there was light” and continues to flow perfectly into the first song, “Revolution”. In fact, I thought that it was all just a part of the same track when I first listened to the album. “Critical” features Planet Asia, with whom MC Zion trades verses that do nothing less than convince the listener of their rhyming prowess. The subject and melody on “Mysterious Ways” gets annoying and repetitive after a few listens, though it is quickly salvaged by “The Choice.” This spoken word track is so original, you’re left wondering how it will be topped. The next track does though, tying both track’s subject matter together perfectly. The first half of the album seems to be building up to “Trippin'”, both beat-wise and lyrically. It is apparent why after one listen, being this is probably the best song on the album:

“Just a micro-cosm
Of a larger macro-problem
I sit with my pen and pad
Imagine ways to solve ’em
You can call me a dreamer
But I do not need a Beamer
To validate existence
I’m blessed in every instance
TV, fear, pain
Will leave you stained
Welcome to the other side
They said it never rained
You’ll never win a game
Where the rules always change
First a college degree
Now a PHD
But if you got black skin
You need at least about three”

Zion I follows immediately with “How Many”, a piano laden track that lays responsibility on hip-hop artists to make a difference in this aforementioned corrupt society:

If you aren’t convinced of Zion I’s ability to mix a message with music, he will soon. “Fools Gold” is a one minute introduction containing samples of everyone from Jay-Z, to Notorious BIG, to TLC, commenting on cash. It’s apparent why on the next track, “Venus” which portrays a woman who chooses a materialistic life over finding true love. This unique, metaphorical way of writing reminds me of “I Used To Love H.E.R.” by Common. “Rap Degrees” also becomes repetitive and annoying in the same way as “Mysterious Ways” did, but once again Zion I quickly saves itself. “Silly Puddy”, featuring The Grouch, recognizes how “to Him I’m just some silly puddy” and then asks God to give them what they need to “say what I need to say.” The album ends with “One”, which contains an addictively sick chorus, further adding to the plethora of dope songs on Mind Over Matter.

Mind Over Matter is more than just an album, it’s an experience. Even the skits add immensely to the 15 songs that grace this album. Though at times the beats get repetitive and almost too “futuristic”, but Zion I does more than his share to pick up the slack. Some might find his voice too high for their tastes, but there is no denying his skill with the pen. Realistic and refreshing are best to describe Zion I as a whole. There is one thing that this album doesn’t have and that’s gimmicks. If you want corny, battle rhymes over recycled beats, I suggest you look elsewhere. Zion I is rising above everything average in hip-hop and, if you’re willing to listen, they’ll take you there with them.