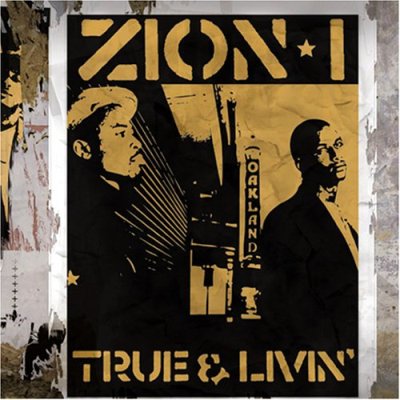 Year after year, record after record, Zion I continue to assert their position as one of the most underrated, consistently brilliant underground institutions in rap music. Exactly why have these Bay Area natives continue to hover far below the mainstream radar is a perpetual mystery, considering the ubiquitous commercial presence exerted by neighbours like the Freestyle Fellowship, the Hieroglyphics and the Living Legends. To think this is the group that issued the sublime “Mind Over Matter,” a record that is on par with “Labcabincalifornia,” “Almost Famous” and “93 Til Infinity.” Whenever I spin a Zion I record, I can’t help but reminded of like-minded visionaries The Coup, another duo that seamlessly blends deeply musical, soulful production with admirably articulated, socially relevant diatribe, and who also remain woefully underappreciated by the rap public.

So yeah, this is pretty much more of the same from Zion I, which is to say that it BUMPS from first minute to last, a work that stimulates thought as much as it tugs at your neck. Amp Live’s production is as dependably arresting as it’s always been, boasting an array of musical touches that display his acute sensitivity for sound and dynamic. “Doin’ My Thing” is a certifiable BANGER, introduced by a wailing, contemplative trumpet and propelled by a simplistic, spectral key loop and THROBBING, rich bass drum. “The Bay,” meanwhile, CERTAINLY reminds one of the Coup and perhaps even the Goodie Mob’s funkier moments, driven by a reverberating upright bass (GENIUS!), insistent handclaps and a choir that adds sultry soul to the swelling, climatic chorus. Meanwhile, “Soo Tall” features an unconventional staccato time signature, fuelled by lush banjos, tense strings and electronic sounding tabla-esque drums, juxtaposing futuristic sounds with firmly traditional instrumentation. It’s banger after banger on this one, the album referencing a broad range of influences, forging a host of percussive sounds and instruments to form a forward-looking, thoroughly enchanting record.

As one might expect from a Zion I record, the topics examined within are lofty and stimulating- “Doin’ My Thang” is the requisite, self-explanatory ode to honest individuality and integrity in the face of harsh realities, “The Bay” is a gritty, lucid portrait of life in the Bay Area, baring all the vicious truths with a frank honesty free from the glamorized romanticism of BET. “Luv” is an uplifting paean to starry-eyed youths, a moral blueprint for innocuous children surrounded by violence and materialism. Of further interest are the STELLAR guest spots on the record, used very tastefully and sparingly- it’s clear that Zion I do not require the gratuitous gimmickry of excessive guest producers or emcees on the record. Talib Kweli’s verse on “Temperature” (perhaps the highlight of the record) is vintage Kweli, encapsulating his enlightening, flawlessly cohered commentary in a succinct verse. Aesop Rock’s feature on “Poems 4 Post Modern Decay” is similarly effective, Aesop taming his trademark rambling, scattershot delivery to fully articulate and enunciate the jaded introspection latent in his verses. Elsewhere, Del pops up in sterling form on “What U Hear,” an invigorating and incensed lash against dishonest emcees, and Gift Of Gab turns in a commendably solid, breathless performance on the swooning “Stranger In My House.” Needless to say, Zion holds his own against such luminous personnel, his Q-Tip meets Boots, intricate yet accessible delivery proving itself a flawless counterpart to Amp Live’s earthy, rootsy yet heady production.

To be perfectly honest, this isn’t a groundbreaking record, and Zion I are far from being one of the most progressive-minded artists in the business. They have treaded similar topics before, and have furnished their works with similar arrangements, but everything about this record feels more realized, more consummate, more urgent than ever before. The record possesses a natural, spontaneous flow and seamless consistency that renders it an enriching, immersive listen that endures countless spins. While I will not venture to say that it has the same timeless charm as “Mind Over Matter” just yet, it could very well be the finest work to bear the Zion I name to date, and if you are familiar with the exceptional quality of the previous two records, this is truly an accolade that means something. Few artists walk the walk and talk the talk like Zion I, and if you have any interest in intelligent, deeply musical and evocative hip-hop that will rattle your trunk and your train of thought simultaneously, you owe it to yourself to hear this record.