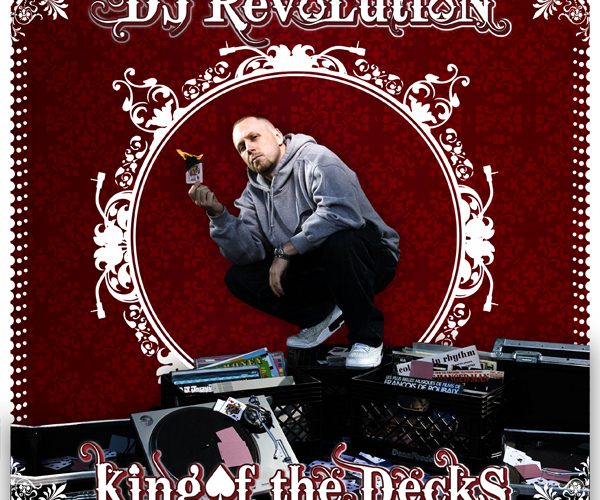 DJ Revolution :: King of the Decks

DJing is one of the four central elements to hip-hop culture. In a way, it is the most important element in Hip-Hop culture. It was a DJ who first began looping old funk and disco records to create break beats for emcees and b-boys to enjoy. It was a DJ who invented the scratch, a sound that has become synonymous with rap music. DJs were central to early acts, providing the music and serving as hip-hop’s version of the live band when performing on stage. DJs remain vitally important as they serve as a link between emcees and their audiences. Radio and party DJs dictate what becomes popular. No matter how important they may be, DJs are destined to a life as the silent partner in a very successful business. After all, no matter how great an ear for music a DJ may possess, in the end it is the emcee that remains the star of the show. No matter how dope the scratches in a DJ Premier track may be, a young kid is much more likely to try to rap over those scratches than recreate them. DJs don’t really complain â€“ but every now and then a DJ will creep out of the shadows to remind the world that DJs aren’t just an afterthought. DJ Revolution is the latest DJ to step up and has made a bold statement with “King of the Decks.” Not a rookie by any stretch of the word, Revolution has been laying down flawless mixtapes for years now and is very well known. He even released a similarly themed album back in 2000 that was met with massive critical praise. This time around Revolution is poised to turn that critical praise into commercial appeal. He’s teamed with one of the premier indie labels, Duck Down Records, and brought in a diverse crew of emcees to drop bars over his meticulously constructed beats.

The album kicks off with DJ Jazzy Jeff cosigning DJ Revolution, before Revolution proceeds to scratch things up a little. The legendary cosigns don’t stop there as DJ Premier shows up later on and gives Revolution one of the biggest compliments a DJ can receive. Actually, I must say that Revolution succeeds in one area most rappers fail in, skits. His skits are either informative cosigns or hilariously funny. “Scratch Nerds” pokes fun at Revolution’s fans who obsess over scratching. The skits are entertaining, but emceeing is the main draw of this CD and it delivers in a major way. I couldn’t find one bad song on the entire CD and the collection of rappers shows nice variety. Sean Price and Tash of The Liks team up for “King of the Decks” where Tash tries “to understand how Rev hands move faster than the trains in Japan.” KRS-ONE drops serious knowledge on “The DJ” where he reiterates the DJ’s importance in the rap game and formulates his 10 rules of DJing. If there is one required listen for someone thinking of becoming a DJ, I would recommend this song.

Guilty Simpson teams up with vet Royce Da 5’9″ on “Do My Thing” for a dope collaboration between old and new Detroit. “Funky Piano” features LA rappers Bishop Lamont and Crooked I showing us why it’s ignorant to assume “gangsta” rappers don’t have lyrics. Special Teamz calls out rap perpetrators on “The Big Top” where they equate rap to “a circus of clowns” over a beat comprised of circus music. Joell Ortiz and Termanology team up on the latin influenced “EY” to drop a latin hood anthem. Basically, whatever your flavor is, you’ll find it on here. More likely, you’ll also find yourself digging rappers who you weren’t necessarily a fan of. Aside from the aforementioned, Freddie Foxx, Planet Asia, Blaq Poet, Strong Arm Steady, Evidence, Defari, and Boot Camp Clik all make appearances on the CD.

The production is on point throughout and very varied for a so-called “underground” DJ/Producer. “EY” is downright danceable with its frantic drums and Spanish guitar licks. “Blow Da Spot” has a funky west-coast inspired bass line. “Casualties of Tour” features classic east coast production and even finds Revolution picking up the mic to relate stories of his travels. On top of well produced music, Revolution doesn’t forget to give you some serious scratch sessions, just in case you are a self-professed “scratch nerd.” “Invaders from Planet Sqratch” features DJ Q-Bert and is the kind of futuristic, quirky scratch fest one would expect from the man. “The Re-Match” is a classic battle between DJ Revolution and DJ Spinbad and has to be heard to be fully appreciated. The album ends with “Raided R” another DJ to DJ collaboration featuring DJ Raid.

Overall, DJ Revolution shows us he’s worthy of being T.I.’s counterpart on the turntables. Revolution represents hard with everything he does, from manning the turntables to producing music. He even has some decent rhymes when he picks up the mic. On top of the variety of rappers we’re given, we’re also given high quality rhyming from all involved. Basically, any hip-hop/rap fan should be able to appreciate “King of the Decks.” Revolution finds a way to counter every criticism one can throw at the project. You’re not into an hour of scratching? We’re only given 15 minutes of it here and there and what we are given is dope. Underground rap can get boring and monotonous? We’re given a variety of rappers who keep things fresh from start to finish. Unless you have a personal vendetta against Revolution or DJs in general, you should consider adding “King of the Decks” to your collection.