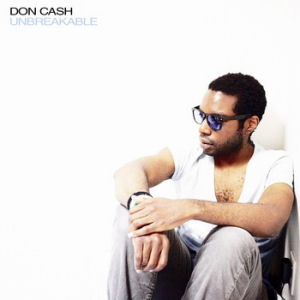 Hailing from Canada, Don Cash is, without doubt, the strangest, most beguiling and utterly intriguing rapper I’ve caught wind of in a long time. His story is part hipster poster boy, part Jay Electronica, part hustler (even anti-hustler). This mixtape sounds like a complete load of bullshit for the first couple of spins, and then you can’t wait to listen to it again. Cloaked in the night, sounding messy, cheap and random, “Unbreakable” has utterly achieved its objective insofar as taking someone entirely uninitiated (that would be me) and making me want to listen to Don Cash’s back catalogue and, in particular, most recent album (called â€œFreshy Freshâ€ â€“ expect a review very soon).

He raps, sings, produces and has one of the coolest natural rap voices of the past few years. It does indeed take a couple of spins to adjust to his seemingly off-kilter flow, but persevere, dear Reader. Cash has the feel off a languid West Coast G, but without any of the gangsta connotations – some of the music reflects this too, with funky bass lines dovetailing perfectly with the cheap staccato drums patterns. It has an ominous feel, yet remains as light as a feather. Suddenly, halfway through the set, in switches to a glorious house number, seemingly looped with either the swing turned up to the max, or off-beat (that word again) to imitate a DJ fucking up the loop in/loop out. It’s a shock tactic that works brilliantly.

“Unbreakable” has a total length of just less than 44 minutes. It feels like it took Don Cash about 45 minutes to make the whole thing. Yet it works. This feels like a glorious reminder of why we love hip hop, or for that matter, music. In this genre, ANYONE stands a chance of making interesting music. I mean hell, the vocals sound like they were recorded and mastered in a garbage can. The beats must surely have been composed using Fruity Loops on a laptop circa Windows 98. Yet, the musicality is there – not just in melody, but also in his wonderful voice. His lyrics are actually pretty great too; he knows precisely how to phrase something so that it sounds distinct. His flow, his fucking bizarre flow: either he is the worst rapper of all time or EVERYONE will flow like him in the future.

This mixtape is good, not great. But I can’t wait to go and listen to Don Cash’s “proper” album because there are glimpses of genuine greatness here – not wanky hipster hyperbole, but actual musical greatness. The way he sounds on “Threepeat” compared to “So Far”; his singing on “Get Up Everybody” contrasted with the sinister “How to Make Money” are polar opposites, but share a similar DNA: uniqueness. It’s hard enough to sound unique in this here rap game, but to do it whilst retaining a sterling quality level, and all the while hooking in the listenerâ€¦ For sure, not everyone will “get” Don Cash – hell, it took me a while – but I can totally understand why he has an important following. I’m just pissed off that he spent so much time in the UK recently and I never even knew he existed. I do now, make no mistake.