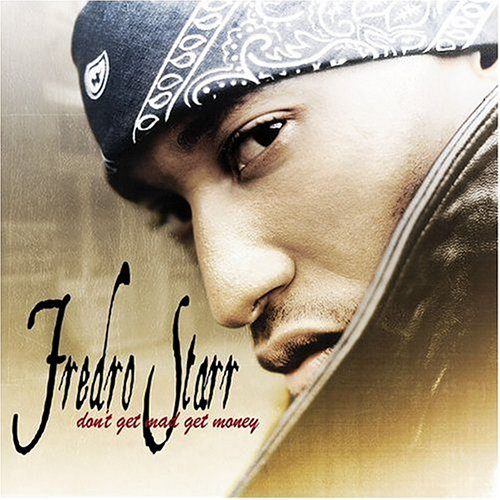 Fredro Starr’s got a frustrating relationship with Hip-Hop. Sometimes she shows him love, and at one time while part of the supergroup Onyx he might even have been married to her. When their success faltered though and she tried to play him out, he left for Hollywood and found success as ‘Q’ on Moesha and in leading roles on films like “Save the Last Dance” and “Sunset Park.” Hip-Hop realized her mistake and lured him back for 2001’s “Firestarr,” but like Ice Cube before him was treated better by the Tinseltown crowd than H.E.R. friends, who showed him little love.

As tumultuous as their relationship might be, Fredro Starr has decided he needs to stick with Hip-Hop for a little while longer and see if they can work it out. “Don’t Get Mad Get Money” is his mantra; why get vexed about beefs in the past when out in the streets is a lot of cash? Starr also has an advantage over his fellow former Onyx compatriot Sticky Fingaz, and ironically it’s that Fredro was never identified as “the voice” in that group. Consequently it’s easier for him to build on his reputation without being forced to play the role of angry baldhead. This flexibility is shown on the lead single “California Girls,” a song which musically sounds like a mixture of Jay-Z hits: the tempo of “Get This Money” with the falsetto of “I Just Wanna Love U.” Fredro’s rough hewn voice gets a jiggy polish on an ode that’s more Beastie than Beach Boys:

“From the PJ’s back to the palm trees
Puffin on the dirt then burnin the bomb weed
(Ohh!) The six-four’s automatic with the wood
Hittin switches, cars bouncin like rabbits in the hood
You want money ma? Yea we got dough
You wanna ride in, hot whips, we got those
Superghetto, Cali chicks, we got hoes
And we still don’t trick, all you gettin is Roscoe”

Last time around Fredro Starr tried to do his own production, but this time he wisely passes the torch to cats like Porky and Kronic Tones. Never heard of them? You’ll get to know the latter from his Just Blaze/Kanye West style work on “Pranksta,” his melodic grit on “All Out” featuring Sticky Fingaz and X-1, the smoothed out title track and the ominous “Reaper’s Anthem.” Porky’s work on “California Girls” shines, but he also handles the bouncy flute of “Finer Things” nicely and still blasts it out for the streets on “Timberlands,” Fredro’s free advertisement for his favorite kicks:

“When Fire stomp through the hood, you know he gotta have his Timbs on him
Shirts jeans, ball shark with the fins on ’em
You know the Coupe with the twenty inch rims on ’em
Sittin on dubs while you got them tins on ’em
Chrome look nice, when I got the Benz on ’em
Chicks love the way that they shine and spin on ’em
The Timbs that had just came out, I BEEN worn ’em
One pair of my Timbs is worth ten Jordans (yo sorry M.J.!)”

Fredro Starr even provides a more than serviceable track of his own, thanks to co-production assistance from H. Delgado and a smooth Isaac Hayes sample on the song “Where’s the Love.” If Fredro had asked Hip-Hop, she might have told him that an edited version of this song would be a better lead single from this album. If she’s smart, this one will get pushed out the door next regardless:

“Hear babies cryin, young black mens dyin
Single mothers givin up on the world, keep tryin
Gunshots ricochet, off bricks from the buildin
It’s sick, and this ain’t no place to raise children
They’d rather go to war and buy guns for six billion
Keep us in the hood, right next to all the killin
Murals painted on the walls, ghetto gravesites
So detail precise, like it’s comin to life
When you walk past, say a prayer, pour out your beer
Reminisce, all the time, when ya nigga was here
Son you never feel the pain ’til the shit hits home
Son you never feel the pain ’til it’s one of your own
Where’s the love?”

Having show some promise on his solo album, Fredro Starr takes a fickle Hip-Hop by the hand on this sophomore release and shows her that he’s got what it takes to make it as a soloist without his Onyx crew. In turn, it’s up to H.E.R. to show him more love this time around, because Fredro has put in a solid effort that nobody can be mad at. Since comparisons to Sticky Fingaz are somewhat inevitable given they ran together and are both pushing weight outside their former group, here’s the bottom line: Sticky swung wildly from a conceptually brilliant album that sold poorly to a cliched boring album that will probably sell equally poorly, despite the fact he may be the better lyricist and orator of the two. Meanwhile, Fredro released two albums – a decent debut, and a better than the average follow-up. Fredro may not blow people away with drop-dead funny punchlines or scary-ass thug shit, but he plays to his strengths and consistantly gets better. Starr proves you can go to Hollywood and still get love from H.E.R. at home base, and if she’s smart Hip-Hop will not let him go again so easily.