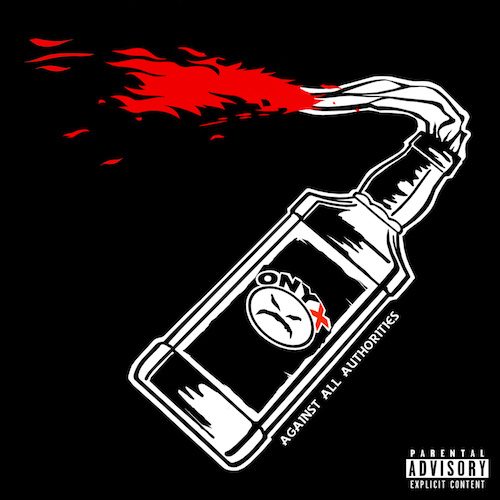 Onyx :: Against All Authorities

Are Fredro Starr and Sticky Fingaz better off together than apart? That’s certainly the conclusion I drew from #WakeDaF-cUp” last year. You have to give them both credit given that Onyx seemed to have reached their untimely demise back on 2003’s “Triggernometry,” an album which was musically bankrupt and completely devoid of inspiration, but after going their separate ways to pursue their own interests (including several high profile acting gigs for Mr. Fingaz), they’ve actually found renewed inspiration in recent reunions.

The biggest surprise of “Against All Authorities” is not that Onyx is still standing after two decades, it’s that this time around they’ve found incredibly specific targets for their anger. The anger alone used to be a selling point – they’d yell, they’d throw guns in the air, and they’d slam all over the place like a hip-hop moshpit. In 2015 though #BlackLivesMatter has given Fredro and Sticky some incredibly powerful motivation though, and you can hear it all over the six tracks of this Scopic produced EP. Even their guest artists step up and embrace the hate. “Black Fatigue” features SickFlo letting you know exactly where his heart is at when it comes to the C-Cypher-Punks.

“Black fatigue, no slack, brrrap! Ka-klack
The streets catchin-a-fire and the bodies that are stacked are black
Jaded authority parade on slain minorities
I’m craven and brave enough, to snuff the majority of
these figures, demons in uniform
‘Protect and Serve’ as much as the reality of unicorns
You? Not of the norm, I’ve been sworn on the corners
Ready to war, they scared of my aura, it’s enormous
Routine stop? Well my routine’s cocked
Blast trip and get your whole blue team shot”

Even though SickFlo’s verse is the one highlighted, he gets upstaged momentarily by Sticky Fingaz, who screams himself hoarse with his rage at the racism of cops and politicians, not to mention the hypocrisy of “white boys callin themselves niggaz.” That’s both the strength and weakness of any Onyx album really – no matter how good the other contributors are, Sticky tends to upstage everyone. Still if you’re looking for someone who can hang with him lyrically and charismatically you can’t go wrong with Ras Kass on “Da Liquor Store” or Merkules on “Look Like a Criminal,” which for me is the highlight of this short album.

Having a political issue to give them focus gives “Against All Authorities” the impact it needs, although it’s still a little odd to hear looting and ISIS discussed in the same breath on the title track, all while noting, “to the cops we target practice.” I think to terrorists everybody is target practice, so we’re kind of muddying the waters with those references. The only other deteriment to this EP is that Scopic is just so-so as a producer. He doesn’t muck things up or make tracks that are poorly mixed, but the headnod value is directly attributable to your familiarity with the artists involved as opposed to the tracks themselves. That’s a disappointment given the ability of the artists on this project to shine and the timely topic matter they have to discuss, but I’m still glad Onyx dropped this little bombshell on the public.