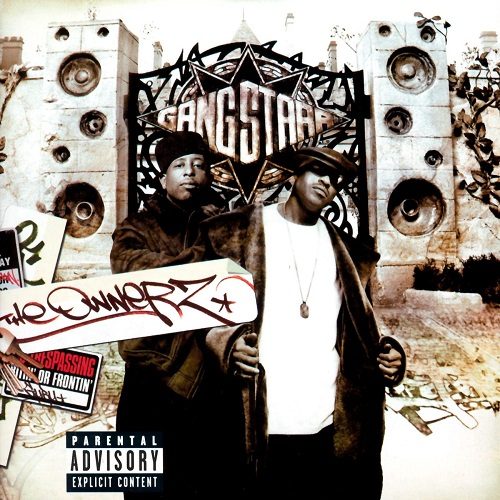 Guru and Premier seem to delight in torturing hip-hop fans. Torture in this case doesn’t mean they’re assaulting eardrums with whackness – if you want that kind of torture go buy an Icy Blu or MC Skat Kat album. The pain here is the kind of shivers, shakes, and cravings that an ex-drug addict has after being given one hit of the raw and being forced to go cold turkey. Not for a week, not for a month, not for a year even, but for FOUR YEARS OR MORE. That was the length of time that fell between GangStarr’s seminal classics “Hard to Earn” and the “Moment of Truth,” and just to make it extra painful they stretched four out one more between that and “The Ownerz.”

If you’re not already familiar with their legacy to hip-hop music and culture though, stop reading this review right now and run to the record store to cop “Full Clip.” Listening to their catalogue of greatest hits (or judging by how radio and TV shits on them, oft times greatest misses) you’ll pick up on why this duo is so addictive. DJ Premier has an uncanny knack for making tracks for any MC, but when working with long time partner Guru he pulls out all the stops. All the elements fuse to perfection – jazzy samples, crispy beats, hard knocking bass and some of the swiftest and cleverest scratching of hooks you’ll hear ANYWHERE. This would mean nothing if Guru didn’t spit his hardcore raps. It’s an endless debate among the true heads – is his seemingly monotonal delivery a detriment or a delight? Some would say his understated style allows Primo’s beats to shine, but others would say Primo brings the melody to Guru and that all he needs is breath control and great lyrics to flow. Both camps usually end up agreeing that for whatever reason, they go together like ice cold drinks on a hot summer night – always refreshing.

“The Ownerz” continues that legacy in impeccable fashion. Clocking in at just under sixty minutes and only containing two skits (the “Intro” and a “Hiney” skit parodying The Clipse “Grindin'”) the album is packed thick with goodness. Every song on the CD is produced and mixed by Primo, and it shows. It starts with the pounding bass of “Put Up or Shut Up” featuring Guru protege Krumb Snatcha, a brief and bouncy interlude of “Werdz From the Ghetto Child” Smiley, and then this already high powered train REALLY picks up steam with Guru’s cautionary “Sabotage.” Beatie Boys got nothin’ on it:

“The names have been changed to protect the innocent
Each step is intricate, I rep magnificent
Knew this kid named Ronnie, used to make cash with Caesar
They made a lot of money back in the 80’s crack fever
Caesar was an overachiever, a kingpin and 18-and-a-half
He got knocked and left Ronnie to watch the team and the stash
Plus his crib, his jewels, his whip and his girl
And Ronnie’s self-interests had him livin in a different world
He rocked Caesar’s chains, he put Caesar’s rings
Smokin mad wools all day, with Caesar’s change
Not to mention he pushed up on Caesar’s wifey
A move like that my man, extremely sheisty
It all got back to Caesar in the bing
They found Ronnie’s body in the playground by the swings”

With the adrenaline pumping from this “live and learn” lesson from Guru, he’s not afraid to spit more jewels at the foolish on “Rite Where U Stand,” featuring a surprise guest appearance from Jadakiss. In some ways, ‘Kiss may be the heir apparent to Guru’s style – his writtens are still more thug than brain drug, but the punchlines are nice and his delivery is eeriely reminiscent of Keith Elam’s own:

“They wanna know why I invest all my money into haze and into dope
Caise right now, I’m currently a slave for Interscope
Respect first, then money – basic shit
If you got niggaz under pressure, you could take they shit
Listen, I’ma leave you right where you stand
Have the ambulance pass ya Timberlands off right to ya man
Cause he pussy, he ain’t gonna do nothin but look
When it come to beef, he don’t wanna do nothing but cook
As soon as the chrome scope him, right there, two in the dome smokin
‘Kiss keep funeral homes open
I fall back, smoke an ounce in the dark
Bounce on a Prim’ track like I bounce on a NARC
Keep playin, y’all niggaz’ll burn
and you know they say it takes somethin to happen for niggaz to learn
Let the forty cal’ give em a perm
This industry is like bacteria and my flow is a germ”

Still, when you hear Guru spit on the crazy tight (like Della Reese in a size six) beat of “Skills” you’ll know there can be only one:

“You need at least twelve jewels to practice
You’re too enthusiastic, male groupie bastard
Still tryin to convince us some more
Pretendin your raw, that’s what you’ll need a minister for
Again it’s the law got you up against the wall
We the gulliest, fuck it then it’s us against y’all”

The pace relents briefly on “Deadly Habitz,” but only because Premier slows it down a little for some wahhhh wahhhh jazz so Guru can discuss the things we all fall victim to:

“Deadly habits, they could be a number of things
Everybody got ’em, some people do ugly things
Excessive behaviour, it can get the best of you
Trust me, I’m a lot like the rest of you
I got issues, that haven’t been resolved
You know like, money people owe me while they out havin a ball
(Mmm) Guess they too got deadly habits
Got me on a mission, to go and merk, each and every faggot
Manager’s coked up, A&R’s all doped up
Old school style, have ’em gagged up and roped up
Those deadly habits have me losin my cool
But yo the Son can’t chill, so I’ma be abusin them fools
Pull the plug on ’em, pull the rug on ’em
Have ’em callin up, all their closest thug friends”

GangStarr usually has at least one song that could crossover to the airwaves, with a little bit of luck. Last time out they did it with the track “Royalty” and following in the same vein of hot beats with sung hooks they have Boy Big crooning on “Nice Girl, Wrong Place.” While the former sang the virtues of nubian queens being good, the title is a reminder that even a queen can have her crown tarnished; although Guru’s still got mad love:

“What’s a nice lady doin in place so shady?
Your innocent stare and derriere is so crazy
Conversation stimulatin you witty
You got me debatin on, takin you wit me
I’m in the back drinking Yak, with you on my lap
Give me a dance cause this is my track
You holdin it down, for your own fam
You wasn’t happy with your last old man?
Ma, you’re doing things your way, you makin your own pay
Gotta have a business of your own one day
Hon it ain’t nothin to it, I wanna see you do it
I tell you one thing, your last man blew it
A perfect blend of beauty and brains…”

After a diatribe by Premier dismissing “robots” on the radio afraid to play anything fresh, he provides some aptly dark piano chords and beats for the ominous “Peace of Mine.” It’s not going to get any lighter in tone on the following track “Who Got Gunz” featuring reputed rap gangsters Fat Joe and M.O.P., nor on “Militia Pt. 3” featuring Big Shug and Freddie Foxxx. If the latter has the rep of being the angriest man in rap since Ice Cube melted, this track exists merely to reaffirm his status:

“I’m the law of the land, the rawness of man
That’ll show up on stage, puffin on contraband
Capture, duct tape rapture, slapped ya
Served up my Venus in Serena, cocked back
popped ya – to internet MC’s, I’m virus
I’m a warrior, niggaz screamin ‘Bumpy shot Cyrus!’
I’m checked in, to every hotel that you layin
Niggaz come to my suite, to pick up heat
Y’ALL KNOW who wrote the bible in rap, for keepin it real
Y’ALL KNOW who buck fifty your face, I’m keepin concealed”

Premier doesn’t let up save for one of his trademark instrumental interludes right before “PLAYTAWIN,” then it’s back to the action. If anything, Guru sounds even more amped here than he did on the last two tracks; and those who accuse his monotone flow of showing no emotion should take a good listen:

“For my respect, I just might have to shut you down
Hang your punk ass from a limb, they’ll have to cut you down
See I’m tired of you faggots kickin dirt on my name
While you rap clone phonies only hurtin the game
I’m too persistant, plus I flow too vicious
Bout to expose you hoes, this shit is too twisted
Rappers be actin, like they rich or somethin
When they get robbed like a herb, that’s what they get for frontin
I’m in the top ten, one of the best of all time
Been known to drop men – who CARES if the rest of y’all rhyme?”

SAY WORD. That is the sweetness that GangStarr junkies have been fiending for since the late 1990’s. It rolls on with one powerful track after another – the revolutionary call and somber jazz of “Riot Akt,” the stripped down powerful attack of “Same Team, No Games” featuring NYG’s and H. Stax, the surprisingly smooth duo of Guru and SNOOP DOGG on “In This Life” and the title track of the album that explains it’s name to all the know-nots who hadn’t to this point figured it out:

“Got you quiddear and ski-dared, fearin what we might do
And you can give me all mine in cash, that will suffice dude
In the streets deep, we roll through the city
Looks like it’s time to eat, so yo who’s with me?
Strictly, we keep it in the best perspective
Cause nowadays it’s more than simply live and let live
A sedative, that’s what these headcases need
Them rats’ll get trapped soon as they taste the cheese
[…]
Phony critics wanna retract shit, once I spit again
And since we didn’t finish the job, you gettin hit again”

Although “Zonin'” and “Eulogy” will give you the chance to cool down as the album draws to a close, you may just have to collapse from sheer exhaustion of repetitive head-nodding to these dope betas and rhymes when done. To refresh yourself, hit play again and start from track one. “The Ownerz” has that pure greatness all GangStarr albums do, in that no matter how tired you are from listening to it, you’ll never get tired OF listening to it. Ten years from now, this one will still be in rotation in your box and GangStarr will hopefully need “Full Clip 2” just to keep us up to date – just don’t make us wait another five years for the NEXT album.