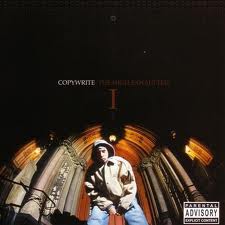 While listening to “The High Exhaulted,” I cannot help reminiscing of my own high school years. I knew this kid back then that had all the characteristics of a full bred smart alec. He was skinny, had beady eyes, and he had the smartest mouth on him imaginable. On one occasion, he was having fun dissing a redneck kid in the school hallway when the big oaf suddenly realized he had enough abuse from the scrawny nuisance behind him. He turned around and gave the kid a smack in the face that echoed through the corridor filled with students. Instead of retreating, the kid stared at the big guy for a second and then exclaimed with a big smile: “You hit like a bitch!” Redneck took his defeat glumly and disappeared with the hysterical laughter of his fellow students chasing him. Back to the future: Meet Copywrite.

The first real song on “The High Exhaulted” makes abundantly clear that Copywrite is a battle MC in the truest sense of the word. “Fucksoundcheck” is a real headnodder laced with some tasty horns over which he drops lines like “If rapping was like fucking, your whole crew would be celibate,” “I don’t want to be mainstream, I wanna piss in it,” or “I don’t blame you for being wack, I blame your fans for being dumb enough to feel you.” Copywrite not only drops some tight lyrics, but also acts as class clown and stand-up comedian all at once.

After this first standout track the stream of insults is put on (quite an impressive) autopilot and ceases when the album comes to a grinding halt with the impressive “June.” In between these two highlights “The High Exhaulted” is an endless stream of battle rhymes that goes over all kinds of sexual intercourse and superior MC’ing skills. Even though Copywrite’s delivery is tight as hell and his tone of voice as aggressive as a pit bull on steroids, things tend to get monotone after a while. There are only so many words to describe a good blow job and sometimes Copywrite steps over the line of being a good MC and becomes just another bar brawler:

“Got hoes suspicious
Even peg leg bitches
After I came, fucked her with their own leg
They don’t know the difference
Your cunt is wet and your pants are soaked with it
I don’t discriminate, I even let cancer hoes get it
So open up, I’m gonna cram your throat with it
I want you to suck like the antidote’s in it”

He will no doubt be getting some chuckles rippling through the room with these kind of lines, but it is quite another thing to label these as ingenious lyrics.

“The High Exhaulted” was Copywrite’s first longplayer independent from his hometown crew Mhz (Megahertz). Even though it was released on High & Mighty’s indie label Eastern Conference Records, most of the production has been taken care of by those same Mhz-crewmates from Columbus, Ohio. The name RJD2 will probably ring a bell to most underground heads because of his superb debut “Deadringer,” and since he is an original founder of Megahertz, he supplied his man Copwrite with some kicks and snares.

Although this album doesn’t come anywhere near “Deadringer” in terms of production, RJD2 shows that he has a knack for making original and melodious hip-hop beats. He uses heavy basslines that go well with Copywrite’s in-your-face wordplay and his sampling is unorthodox enough to provide the necessary variation. Surprisingly, Mhz has more than one producer in its ranks. Camu Tao plays a double role as MC on “Three Words,” and also produces three songs on the album. Because one of those is the fiery “Fucksoundcheck,” we’ll forget about the mediocrity of the other two songs. With a couple of bars on “Three Words,” the final Mhz-member Tage Proto makes appearance and the electric circle is complete.

Remember me talking about something coming to a grinding halt? The grim and beautiful last song “June” shows that Copywrite can put something more on the table than just his battle antics. Together with RJD2 he portrays an insightful view on his own life and his love for hip-hop:

“RJD2 drop that shit so I can drop my thoughts
Drifting away and depress all within listening range
Nah, but for real I got so much shit on my mind
From fake motherfuckers to my future I’m trying to get in line
And doing hip-hop in this life and time
ain’t all nice and fine
At times I feel like my whole life’s a rhyme
full of punchlines and jokes”

After a lengthy instrumental interval Copywrite makes a surprising comeback and drops the most personal lines on the whole album:

“I can’t fully become my mother’s guiding light
till my dad returns to tell me what the other side is like
I keep the things you taught trapped in mind
I know you cared even though you weren’t here half the time
But who am I to blame?
I’d probably do the same in your shoes
I never held that against you
Complained or assumed
you never went through what I’m living
Hell who am I kidding?
Depression is practically
a part of family tradition”

If you like battle primadonnas, this record is definitely a must-have. But if you listen to Copywrite’s more serious side on “June,” you wonder why this Mhz team player didn’t push the envelope a bit more. Now all you end up with is an MC who can verbally beat the hell out of you in the school yard. School’s out, though, and I’m hoping Copywrite also realizes that.