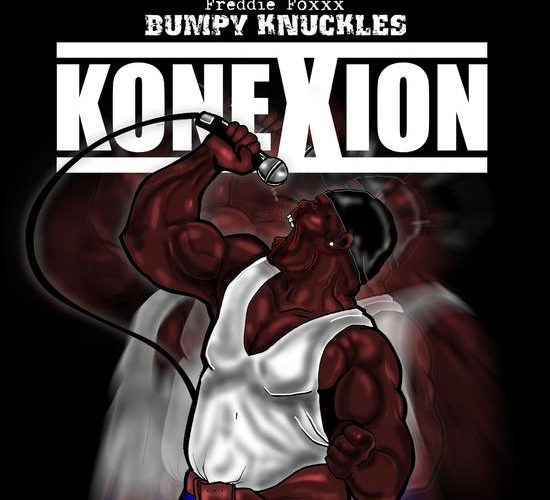 At a point in space and time where dope underground records and infinitesimally minute commercial recognition intersect, you’ll find Freddie Foxxx. In some ways, the budding rap kingpin did it to himself. His debut album “Freddie Foxxx is Here” on MCA Records in 1989 was both a musical and commercial failure. Most rappers who bomb that hard on their debut slip into a musical black hole, but Foxxx escaped the gravitational pull by quietly making cameo after dope cameo on albums by Kool G. Rap, Boogie Down Productions, and Queen Latifah’s own Flavor Unit. His “Crazy Like a Foxxx” album was expected to complete his triumphant return, but for reasons unknown Epic Records shelved the album entirely. Like KMD’s sophomore effort “Black Bastards” this album’s reputation only grew by it’s dissapearance, but that didn’t do much for Foxxx’s career or pocketbook. Despite such hardship Freddie continued to weather the storm, somehow managing to sound iller and more menacing on each cameo verse, culminating in pure lyrical terror on 1998’s “The Militia” by GangStarr. On the strength it solidified his position in rap to the point he could release “Industry Shakedown” on his own in 2000, a masterpiece of righteous indignation at inferior MC’s and the labels who shitted on his career. His new nickname Bumpy Knuckles said it all – this gangster’s takin’ NO SHORTS.

For three long years the hardcore in hip-hop have waited for Foxxx to follow this impressive album, and in 2K3 Bumpy Knux has made that “Konexion” once again. His disdain for whackness has not lessened one bit in that time. In the album’s intro he immediately calls out a lot of rappers for being disconnected from true hip-hop culture, but he doesn’t really get vicious until the DJ Premier produced “Paine” on track three. Primo’s beat unleashes Foxxx’s inner rage, and when Bumpy yells into a mic, heads listen:

“I’m a giant in a field of mice, with Goretex and spikes
Givin R&B rap niggaz short life
You wanna dance with a underground Puffy
Without niggaz around me that might wanna bust me
Sometimes I’m like a white man – don’t trust me
Sometimes I’m like a black man, thinkin like a white man – all you niggaz dis-gust me!
Fuck who you are, I don’t care who you are
I’m the roundest nigga down here, square who you are
You want drama, you can get it!
{*scratch*} And Premier’s down with it baby”

This is not the only time Premier and Foxxx link up on the album though – they rock the soundset again, three exclamation points and all, on “Lazy!!!” Perhaps echoing a common rap complaint that unworthy MC’s get over thanks to his beats, Foxxx mocks other rappers for the first 50 seconds of the song. Since it’s simply more time to appreciate Primo’s track, ain’t nothin’ wrong with that. Once Freddie kicks it into overdrive though, you know it’s on:

“If it takes me a lifetime to prove I’m THE NICEST MC
Then I’m down for every war
And if it ever get bigger than rap – THEN I GET MY SHIT B
Come on down, I’m holdin fours
I hate to be pain in the ass – CAUSE IT REALLY AIN’T LIKE ME
But I couldn’t help but notice
You come into this game with a mask AND SNEAK AROUND LIKE WIFEY
And get popped like shooken soda
Rap voters get Al Gored, which means low scores
On all the music awards
It’s all good though, niggaz from the street DON’T SWEAT NO TROPHY
Cause it don’t make you hot
Aiyyo Roy I’m the heavyweight champ of hip-hop, WALK LIGHTLY
Some of y’all must have forgot”

Foxxx is not a one-producer MC though. He rocks to some headbanging shit by Knockout on the track “Swazzee” that sounds like some straight up M.O.P. shit. “Step Up” may surprise some with Foxxx doing a little triple-time rap in the first verse, but you simply can’t front on HeadBanga’s heavy beat and appropriate “whoah” repeating in the background, let alone DJ Rukas scratching up Audio Two’s “Top Billin'” for an ill as hell chorus. And not surprisingly for Foxxx, one of the album’s best tracks is self-produced. “Konexion” borrows portions of “Intimate Connection” by Kleeer, which may have seemed an obvious choice but is still laced together beautifully. Foxxx’s rap shows his deep heartfelt appreciation for hip-hop, and it will move you too:

Unfortunately in the interim between this album and the last, Foxxx may have greenlighted a few ideas that should’ve been quashed. It may be cute to hear your son on record, but Janah should have been put on an interlude instead of being given a whole song like “Angel.” The song “Tell Me” featuring Bridget isn’t whack per se, but may be a little softer than most of his fan base is used to. “Aim-Cock-Spit” has a crunchy beat thanks to LilBiglilfella, but Tayshine’s verse is another example of little kids having no business being on a hardcore rap album. “When the Angels Sing” can’t make up it’s mind to be underground or crossover thanks to Khadeija’s hook, but Foxxx’s rap still salvages it. You can’t necessarily say the same for “Drop a Jewel,” where a monotonous beat by HiddenAgenda seems to suck the life and energy out of Bumpy’s delivery. Agenda’s beat on “Poetry” is only slightly better.

The album “Konexion” is as a result something of a dilemma. When Foxxx is paired with the right type of powerful beats, he’s an unstoppable force crushing all immovable objects in his path. Yet while 2000’s “Industry Shakedown” seemed to encapsulate a decade + of pent up rage into one timeless rap classic, “Konexion” actually seems to have lost a little bit of that edge. The great songs on this album can carry the listener through the mediocre ones, but it’s just not the same. Freddie is starting to slip away to that black hole again; let’s hope the next album reels him back in.