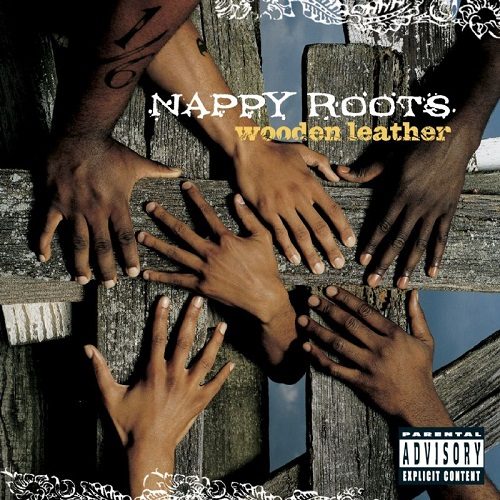 The success of “Watermelon, Chicken & Gritz” last year was the first emergence of Kentucky hip-hop soul onto the rap scene. And Kentucky was more than happy to proclaim their countrified rap superstars both globally and locally; they even went so far as to proclaim September 16th as “Nappy Roots Day.” Put in perspective though, the Nappy Roots haven’t so much broken ground as they have planted the fields tilled before them by a whole generation of soulful Southern rappers. Dissolve away their state borders and Nappy Roots are far more than Kentucky’s finest rap group – they are a group on par with OutKast, Cunninlynguists and K-Otix for bringing the diverse and rich Southern hip-hop tradition to listeners everywhere.

For all of the people who mistake the word “country” for “unrefined and ignorant,” Nappy Roots new album “Wooden Leather” aims to shake the foundations of those beliefs. Don’t be scurred – this doesn’t mean the Nappy Roots have abandoned the whimsical styles, powerful beats and lyrical craftsmanship that made them unique in a quest to be the Public Enemy of the South. Their lead song “Roun’ the Globe” is plenty smooth enough to shake your ass and dance to, but it’s also paired with a message that “country” can be a way of having fun that extends far beyond the Mason-Dixon line:

Big V: “Contraband they was sportin, Jordans in New Orleans
Went for the cajun, winded up stayin
Kentucky it was meth, but Miami they was basin
Rap my ass off in N.Y.C. at the Bassment
Hit V.A., where they do nuttin but cook
Carolina, Indiana, Alabama, Savannah
Boston, Denver, and all points between
Tennesse, Florida, ain’t nothin but love for ya”

Even if the point can be missed while you’re swinging to Mike City’s smooth groove, the chorus puts it in perspective: “Been all around the globe from Monday to Sunday, y’all the same folk we see in Kentucky; it must mean – the whole damn world is country.” True dat. Goodie Mob brought “Soul Food” to the world, but the world already had a taste for it. Whether your tastes run from pork rinds to honey-baked ham, Southern hip-hop can do it up with style. Apparently though, some people still missed the point because R. Prophit’s singing his troubles away in the hook to “Sick & Tired”:

Freddie Mac McIntosh hits an ideal mixture of hip-hop and the blues with his track, while Skinny Deville, Ron Clutch, Big V, Scales and B. Stille bust down their trials and tribulations. It’s not at all depressing – like good blues it turns the pain into music to be enjoyed. And Nappy Roots definitely don’t believe in bringing you down – songs like the Raphael Saadiq produced and guest-starred song “Leave This Morning” keep you uplifted with beats, rhymes and life. Let the lyrics break it down for you though:

“Take me a second to breathe and let stress go
Walk out, grab my paper and wave next do’
Take me a shower, get dressed, and do a quick pack
Say me a prayer ‘fore I leave so I can get back
It’s easy like Sunday mornin with a six-pack
Monday I’m back on the road and I respect that
Gotta go, break a lil’ bread for some improvement
Gotta go, shepherd the world this new movement”

Within the songs of “Wooden Leather” their vibe gradually infects your subconcious to the point the aforementioned “movement” blends into your soul. Raphael Saadiq makes an incredible track on “Work in Progress” that even DJ Premier would be jealous of though, but it’s soulful piano chords, flute and DJ scratches would mean nothing without the individual messages from each member about struggling to survive. And when it seems to hard, a Mike City beat and Anthony Hamilton guest vocals will encourage you to “Push On” in life. “Wooden Leather” never lets you get down, with pride in each and every element of their work that draws from their Southern heritage to give you the full perspective of their lives. Even with the obligatory Kanye West guest beat on “These Walls,” the Nappy Roots seem to draw him more into their sound than the other way around. “War/Peace” has Freddie Mac McIntosh playing powerful guitar and bass, making hard rock into Kentucky hip-hop.

Singling out individual members of the group is almost a moot point – because each voice comes correct with lyrics that match the theme and never detract from the presentation. They blend together as a family, and the songs blend together into an album. From the relaxed vibes of “Roll Again” to the crunked out Lil’ Jon track “What Cha Gonna Do? (The Anthem),” it all comes together into a cohesive whole no matter how different the raps and beats might be individually. Few groups could pull off such an ambitious effort successfully, but that’s what “Wooden Leather” is meant to imply anyway – two things that come from completely different sources which seem to match together naturally and beautifully. That’s the group Nappy Roots, and that’s their new album in a nutshell. From the intro to the bonus “Roun’ the Globe (Collipark Remix)” featuring the Ying Yang Twins, it’s like a Lynchburg Lemonade – sharp and smooth all at the same time. It’s a flavor you can’t help but want to savour.