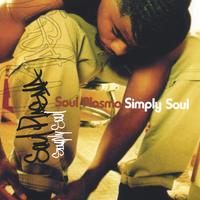 Soul Plasma, as I described above, is a Christian rapper from Portland, Oregon. His debut solo LP, Simply Soul, is curiously-titled as we consider the human soul in its usual context; the human soul is usually thought to be anything but simple. But Soul Plasma is not a preacher; he’s simply conveying some of his thoughts and experiences with conviction-so for the purpose of this review, that is soul.

“Maneuver,” produced by Deepsix, is a rich, symphonic track with chorus vocals and strings laced throughout. Soul Plasma’s verses are nice, though his flow sounds a little rushed, especially against the melancholy beat. It’s still a nice track though. “Life Is” uses some of the same elements as “Maneuver,” and a similar effect is achieved. Ohmega Watts laces the track very well and it’s obvious the first two tracks are ostensibly tinged with a “heavenly” or awe-inspiring feeling. “Perfect Picture” is the first track where Soul Plasma really meshes well with the beat and doesn’t sound rushed or forced. His flow is smooth, easy and intelligible as he narrates some heart-breaking tales:

“She didn’t see a perfect picture in her lifetime
All she seen out her window
Was hustle and grime
Pretty smile when she did, no past to reminisce
‘Cuz all she could remember was her Step-Dad’s kiss
And the things that he did that violated her innocence
He told her she was wrong and that she needed to repent of it
Domino effect, cursed generation
Momma didn’t tell it all because it hurt to face it”

“Walk With Me” is probably the best, most thorough, track on this album: It features a harp loop and chopped-up flute during the verses, and wistful, female vocals on the hook, accompanied by a sweet guitar riff. Mg the Visionary gets production credits on this one, and he really earned his keep. “Breathe,” is Soul’s autobiographical track as he describes his journey through life and eventual finding of God:

“I lost my mother to the penitentiary when I was three
My biological father, wasn’t there for me
But God cared for me, he took care of me
Adopted me into a family
These memories are pieces of my peace and my agony
Surrounding me was drugs and prostitutes
We flirted with this youngster, showing me things they do
Showing me the way they move, all alone in the nude
Too young to understand what it was or what to do”

“The Format” is another nice track, this time produced by Kiv, with chopped-up horn samples providing a nice change-up. “Rhythm,” another Deepsix production, features even more old-school horn samples, and comes to the forefront as possibly the best track on the album. Kanye West himself would be proud of this one-sans the soulful vocals. The soul continues on “Ghetto,” though the track falls a bit shorter than some of the others. “The Section” is musically frenetic and this is one of the tracks where Soul uses the rushed delivery and it works well with the beat. The title track, “Simply Soul,” even features the scratched-in vocals of Common from “The 6th Sense” when he says “From the soul y’allâ€¦” and Soul holds his own.

This album is very much what you think it might be: A lot of music from the soul that speaks to the soul. Soul Plasma is obviously not talking about being hard, or money, or women, or even battling. Instead, he’s just a human being with thoughts to share. His limitations as a lyricist are only as bad as you make them. He’s not going to shock anyone with illness on the mic, but he’s definitely not bad. If you’re a little put-off by the religious theme throughout this album, don’t be; a casual listener wouldn’t even pick up on most the references. The beats are what made this album damn good for me. If you’re the type of fan who listens first for beats, than you’ll probably like this album. If lyrics are the first thing you check for, you’ll still probably like this, but maybe not as much.