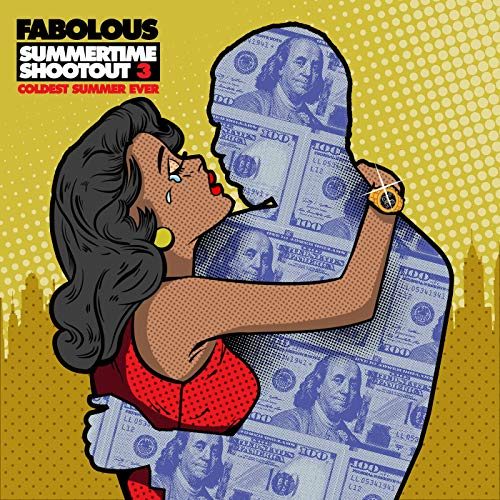 “I just feel like life is hot and cold. Ups and down, back and forth, wins and losses. It’s gonna be some sunshine and it’s gon’ be some rain, but when it rain it pours. But ask yourself — can you weather the storm until the sun shines again?”

Fabolous might as well be talking about his personal life on the opening track of “Summertime Shootout 3“. 2018 was one of his coldest summers ever. He had to weather the storm of four indictments on domestic assault charges for allegedly beating up his girlfriend and mother of his two sons Emily. It’s not exactly the first brush with the law for the rapper born John David Jackson, who has been in some real life summertime shootouts where he’s caught hot lead in the leg and then been charged with having unlicensed firearms in the aftermath. Things were fairly quiet in the 2010’s though until the domestic abuse situation, which may have given me the mistaken impression he was settling down in his 40’s.

Songs like “B.O.M.B.S.” (short for “Back On My Bull Shit”) seem destined to prove the opposite. “Do it one time they gon’ think it’s luck/gotta hit ’em with the repeat/Do it two times they gon’ still doubt/Ay, now I gotta threepeat”. Fabolous hardly needs to convince long time rap listeners. Going back to the early 2000’s the Brooklyn, Bed-Stuy emcee has been the voice of mixtapes, remixes, hot singles and (appropriately enough) summer anthems. Even though the shape of the rap music scene has changed around him, F-A-B stays a throwback in his throwback with a voice almost unchanged by time. The “Seasons Change” though as do the guest stars on his tracks.

The young Tory Lanez was still a shorty playing in the streets of Toronto when Fabolous got signed by DJ Clue, and now he’s crooning with him. Fabolous is doing a little singing himself though. Even though his voice hasn’t changed, the way he modulates it has on songs like “Talk to Me Nicely” featuring Meek Mill. He’s on top of the trends of the mumble rap generation or at the very least savvy enough to be copying the trends.

Maybe that’s what the majority of the audience wants, but that’s not what I want from F-A-B-O-L-O-U-S. He used to be the man you put on a R&B remix to appease the rap fans, but on songs like “Choosy” featuring Davido and Jeremih he starts to become indistinguishable from the singers who cameo on his album. Who’s the rapper here?

There’s a full hour of music on “Summertime Shootout 3” though, and you can still find some actual rapping here and there. “Lovers and haters are like two of the same kind/Both of them feelings can make you do the same crime” quips John on “Frenemies” featuring Josh K, a song which clearly draws the distinctions between the genres. Fabolous spits the bars and K sings the hooks, and a smooth track by Omar Grand and Mally the Martian gives the tandem piano and drums to do it lovely.

Fabolous has never been the top of the lyric writers or reciters out there, but a few decades of experience has given him an undeniable amount of polish in breath control and charismatic delivery. Whether it’s the heavy bass of Leer Luciano on “Us vs. The World” or the Wallis Lane, Foreign Teck and Hitmaka swagger of “Ooh Yea” with Ty Dolla $ign, when it works it works really well. One thing Fabolous has always been good at is making hits — pun definitely intended.

With so much drama in his life over the last couple of years, “Summertime Shootout 3” is a pleasant reminder that when he puts distractions aside Fabolous still knows how to do what he’s best at. There’s always a little bit of a rough edge to his work. After all this is a man who unintentionally misspelled his own name in a freestyle and wound up stuck with it for the rest of his career. Like Paul Heyman once famously said about the wrestlers in ECW though, you get over by accentuating the positives and hiding the negatives. John knows exactly how to do it and does it well here.