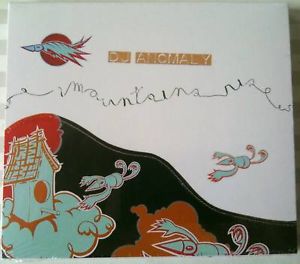 In hip-hop, calling yourself a DJ takes a bit of pride, especially when you are able to manipulate the contents of your crates into something completely new. Yet there is a generation of rap music fans who have no idea of the importance of the man behind the two turntables. It is safe to say that the music by DJ Anomaly is not for them and never will be. Being “DJ anything” will often give you higher expectations when you put your skills in album form, because not only are you creating an audio resume, but fans want to hear tight music. “Mountains Rise” is an album that comes close to being flawless, and it makes me wonder why more people haven’t tapped into this formula. Perhaps DJ Anomaly is not for them and never will be.

“Mountains Rise” shines the spotlight on this Chicago-based DJ, who in turn fills his album with rap tracks featuring the likes of Rusty Chains, Longshot, Ndvisual, and Vyle among others. By doing this, he gets a chance to let the world hear some underground MC’s, at the same time making people hear what he’s about in the production department. Anomaly’s choice of samples are very clever, combining hard and fierce beats with some trippy ethereal sounds and odd bits that make the music as deep as the lyrics found within the songs. He doesn’t dominate in one style, so if you’re in the mood for mellow jazz you’ll listen to “The Day The Herb Stood Still” or if you’re in the mood for incidental soundtrack music, listen to “How I Hit ‘Em”.

If Pink Floyd were a hip-hop production crew, they’d probably create something like “Death”, featuring the talents of Rusty Chains. Here, Rusty Chains talks about something that none of us can escape. He has a voice that is very rough and raspy, and because of that you can’t help but listen to every word he says. The first verse touches on how we can be affected by death on the surface, and then he rips into the second verse where he’s talking about brains on kitchen floors, children getting hit by cars when they’re playing ball in the road, and gas tanks exploding. The revelation in the song is after hearing all of this, he says to “keep in mind (in) the afterlife that a child was just born”. Circle of life, indeed.

Anomaly gets everyone to participate in one of the tightest posse tracks I’ve heard in awhile, “Steady Tweakin'”. Lately when this writer hears a crew spitting lyrics, they sound boring and I’m not motivated to hear anymore. Here, when Longshot passes the mic to Rusty Chains (whose “attitude is fuck you, smash you with a 1-2/smackin’ little ones who think rap is just a hustle/you make the business dirty while you’re draggin’ all that mud through”) you know it’s going to be intense. Anomaly creates a headnodder by making a beat with a slight late 80’s vibe, and he enhances each rapper with appropriate samples and scratches. The rapper to look out for is Ndvisual, because while each rapper tries to top the man who came before, Ndvisual pretty much does his best to make “Steady Tweakin'” his own:

“Self scientific, brain nutritious, flow terrific
I rap in general but man, I know specifics
Watch me dance with the beat and still stand out vicious
These crumbs step up to the table with food and dishes
Peep game, I speak strange, walk wicked and do different
I got suede Tim’s but these motherfuckers are shitty
I want it all, I am, I don’t want to look gritty
Peace to Biggie, down before it was wack to be jiggy”

The MC’s he chooses are top notch, but he allows himself to take in the shine of the spotlight in five of the 15 tracks on here. Anomaly knows how to knock out beats, but in his own solo tracks he shows that he can create some powerful pieces that stand out in their own right. Fans of Nobody, Diplo, and Quantic will get into his choice of samples, where he gets very thematic and dramatic, creating mental movies that takes a certain skill and talent to do. What makes Anomaly even more interesting is that he applies these same techniques with the rap tracks, so this album isn’t lopsided as other DJ-oriented albums tend to be. If “Gutter Language”, featuring Longshot, doesn’t impress hip-hop elitists, I don’t know what will. By ending the album with this song, Anomaly shows he can be musically complex, equal to the lyrical genius of Longshot’s verses. It’s almost a DJ/MC competition, a friendly one at that, where they compliment each other to where it becomes nothing more than playtime. Except in this case, the toy box has a couple of mics, RCA chords from Radio Shack, and a bunch of dusty records.

“Mountains Rise” shows that DJ Anomaly is definitely not a follower. He should set an example for many of today’s artists who are making money off of lazy production and beats. Then again, DJ Anomaly is not for them and never will be.