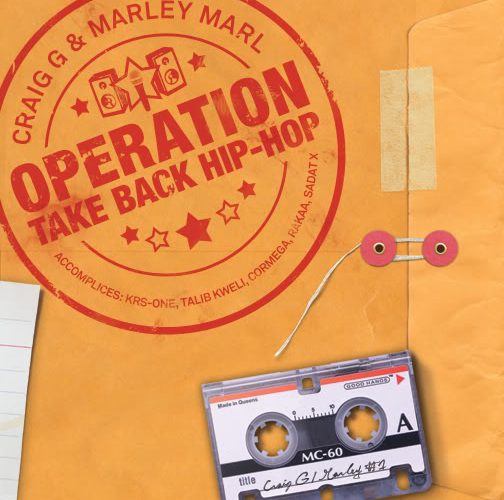 Let me start by saying how much I respect the Juice Crew and its place in hip hop history, which at this point is undisputable. From “The Symphony” â€“ arguably hip hop’s first posse cut â€“ to the Queensbridge/Bronx battles of the late â€˜80s, they have secured a leading spot in the hip hop annals by any reasonable analysis. Even the Crew’s lesser known MCs eventually garnered major attention, as artists like Masta Ace stepped back into the spotlight years later.

Unfortunately, a stellar past does not equal a great album in the present, and Craig G & Marley Marl’s “Operation Take Back Hip-Hop” suffers the fate of many rap veterans’ projects in its inability to present a sound that is both true to its roots and pertinent to the current music scene. That’s not to say that older artists must conform to the trends of the day, but to languish in the sound of a bygone era without updating the paradigm in some way is generally a formula for failure, or at least irrelevance. Despite the best of intentions, this duo of rap pioneers fails to convert the ascendancy of its past into a timely artistic vision for the new millennium.

That’s not to say the album is without its good points. Craig G on his worst day is still a sharp lyricist with a pummeling flow who sounds comfortable on most any beat. And Marley Marl is a legend for a reason, capably flipping samples into tight compositions of understated elegance with ease. This is most apparent on the tracks where Marley goes for the straightforward old school vibe, as on “Deep Down” and “Rock Dis” featuring KRS-One, both of which are made to bump on your Walkman (or iPod, as the case may be in the oh-eight). Unfortunately, the simplicity that works for these songs is a detriment to the album as a whole, which is made up of similar sounding beats of one or two bar loops that fail to really differentiate themselves. None of them is exactly wack, but they all lack the extra touches to elevate them to that next level. The “Reintroduction” beat of twangy electric guitar and fuzzy bass is hurt by an irritating whistle effect that lasts the entire song; the weird bloopy sound effects of “Quality Work” detract from an otherwise decent beat of piano chords and string stabs; and although “Made the Change” has real potential, with its dusty drums and cool flute riff, it never goes beyond this basic combination and hence loses its power.

Since the beats fail to distinguish themselves, it’s up to Craig G to put the defining touches on these tracks, and for the most part he disappoints as well. Damn near every song is about one and the same thing: how much hip hop sucks today and why he is so much better at it than you. He embarks on this theme on the album’s first real song, “Reintroduction”:

“And I ain’t one of these angry old-timer rappers
I’m a fan thinkin shit has to change, let’s build it back up
We need more originality, vitality
Cuz life’s never based on one theme in reality
Music for every mood is what hip hop’s missin
Money fucks everything up, it’s real, an old tradition”

Unfortunately, despite his claims to the contrary, Craig G does mostly come across as the bitter old guy in the club who remembers when everything was supposedly better without providing any real context to his statements. His argument that hip hop needs more variety is certainly accurate, but his own raps on this album do very little to achieve this as he chooses to dwell on the music’s poor current state almost exclusively. He effortlessly composes complex rhyme structures one after another, but they start to feel stale very quickly â€“ he even uses the line “monkey see, monkey do” on each of the first two songs. He drops a few jewels on most songs, enough to make them listenable (“glass house niggas stay tryna throw rocks when you’re broke / but get dough? They tight like Botox”), but he rarely switches up the topic and occasionally spits some truly awkward metaphors (“I +Night Ride+ the beat, call me David Hasselhoff”; “get plugged like a USB port”). Even the guest rappers are unable to find their A-game, as Cormega’s flow never quite finds the groove of the beat on “War” and Dilated People’s Rakaa pens one of the only verses of his career that isn’t instantly jaw-dropping on “Quality Work.” In all, the lyrical half of the album is as undistinguished as the musical.

It sucks to have to diss a legend. It sucks even more to critique two of them, and while Craig G & Marley Marl’s “Operation Take Back Hip-Hop” isn’t really bad, it feels sadly uninspired despite the solid line-up of artists affiliated with the project. There’s nothing here that will outright offend your auditory sensibilities, but nothing is likely to particularly grow on you, either. For artists of this caliber, that in itself is a disappointment.