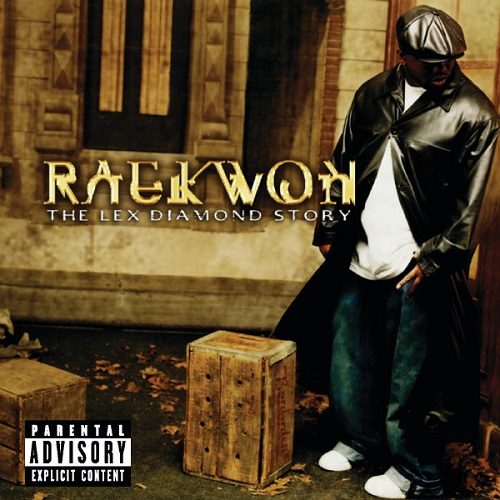 Corey ‘Raekwon’ Woods is one of the most enigmatic figures in the Wu-Tang Clan. While his appearances on “Enter the Wu-Tang” turned a few heads, it was his “Only Built 4 Cuban Linx…” solo album that made him a serious contender for best spitter in the Wu let alone on the East coast. With RZA behind the boards and Ghostface Killah tag-teaming with him on the verses, Rae established himself as a potential heir to Kool G. Rap’s throne as the most visual rap artist. If what he said painted pictures, it was the way he said it that made each brush stroke masterful. Like E-40 out in Vallejo, Raekwon invented his own slang as he went along, and left the rest of the rap nation playing catch-up or copycatting his style. In fact, he was so widely imitated even BEFORE the album’s release that it prompted him to record one of the few classic skits ever on a rap album (“Biters”) where he threatened the lives of anyone copying his shit. Quoth the Raekwon: “Nah son, let me tell these niggaz somethin God – I don’t want niggaz soundin like me… on no album!”

Unfortunately for Woods, that’s exactly what happened. Imitators spread like the flu, copying both him and the Wu, and watering down what was once their own unique and distinctive sound. By the time he dropped his sophomore release “Immobilarity” fans were expecting him to up the ante and show the imitators as frauds, but both RZA and Ghostface were missing in action and Rae’s enthusiasm for rap seemed lacking. It’s possible that after such a dissapointing, poor-selling album, hip-hop heads assumed he would step out of the spotlight and only be found on future Wu-Tang Clan group albums or making cameos on the solo LP’s. You know what they say about assumptions though. Coming back in 2003, Raekwon has adopted his Italian alter-ego of Wu-Tang fame to bring rap heads “The Lex Diamond Story.”

One thing everybody should get over right off the top is that RZA is not on this album. RZA doesn’t produce on it, RZA doesn’t rap on it, RZA ain’t here at all. That doesn’t mean the Wu is absent – happily, Ghostface is all over this release, and guest appearances by Masta Killa, Cappadoonna, Method Man, Inspectah Deck and even Tekitha can be found on the disc. The roster of those joining the fun isn’t limited to the Wu. Mobb Deep member Havoc is on “King of Kings,” Fat Joe gets down on “Clientele Kidd,” while Capone and Sheek Louch both bust on “Planet of the Apes.” There’s no question right from the start though that Rae is predominant. Over Mizza’s slickly produced “Pit Bull Fights,” Woods starts busting those vivid descriptions that put you square into the moment:

“Pit bull fights, niggaz is bustin the lights
Undercovers gettin killed for drugs – yo
Fiends is basin, runners is licensed to fight
Young gangstas chase sneakers and snubs – and yo
Elevator’s broken, pissy stairwells and shells
Old men gossip with tales, you know?
Police burners with bodies on ’em, bury ’em
Worry for minutes then we fire them (blaow!)
I see firemen, ambulances, narcotic mansions
So melodic, rock chronic, pop tonic scramblin
See all these niggaz into gamblin – yo
Just give me square feet, uniquely I’m handlin niggaz
Done danced with niggaz, plus yo, threw niggaz in vans
Left him on trains, his veins got ham in ’em”

It’s so gritty, you can practically feel the blood on your hands and the dirt under your nails. “Missing Watch” is equally evocative, but it’s a little more humerous – Ghost and Rae are looking for some jewels that were snatched, and not afraid to start a ruckus in the process:

“I started buggin out, fell in the zone, half the bone lit
Passed off, rubbin on my ski hat – oh shit!
My blunt fell, my watch, you seen it?
Gleamin little young fella, he just had the stupidest look, weeded
Yo, I’m tired and stressed, hungry and I’m vexed
And I’m flippin cause these niggaz wanna play me for test
Shit fell off ya hand Lord? Stop it, I’m eyein niggaz in they faces
After that I’m goin at niggaz pockets
The watch, faggot yeah, y’all niggaz got my shit
“Yo Lex we family, I helped you cop yo’ shit”
Then help me find my shit!
Eye-ballin every fake Frankie Lymon in the joint
Break out, find my shit!”

If there was ever a point where Woods lost his focus, he has obviously found it again by using Raekwon to tell Lex Diamond’s story. The narratives are sharper, the beats are crisper than the last time out, and the old vigor of his flow has returned with a passion. On “All Over Again,” he acknowledges the greatness of his history both individually and collectively with Wu-Tang, but shows that despite a momentary lapse he never really went away at all:

“RZA had a vision, instead of cookin coke in the kitchen
He told the God, hit the booth and start spittin
At first it was a dream to me, Ol’ Earth buggin
Put your gun down, screamin that the streets is gon’ be needin me
I did the Knowledge to the Wisdom that you spoke to me
The Wu become us, the world enbraced us
A new day, a new life for the God
Got a hood thing, watchin “Ice Water” evolve
Destined to build a mountain – niggaz is doubtin my work
Black millionaire, check what I’m worth
I gotta thank y’all for takin in Lex, I appreciate it
I apoligize for keepin y’all waitin”

Now that’s just too ill – cocky enough to know he’s one of the greats but humble enough to apologize to his fans for not returning to form sooner. It’s another of Raekwon’s unique traits – the ability to connect one to one to his audience via his words and flow and make each word seem personal to the listener. The beats are like Raekwon’s canvas, and the tighter they stretch the more vivid his colors get. The scratchy, fried chicken needle pop of Zephlon’s beat on “Pa-Blow Escablow” makes every word sparkle like Lex’s name:

“The killers increase, he fail but
Maybe a little bit, the Medellin cartel will fail
Diego his horse was George Jung
Yo would argue over large sales, hittin Cuban with lumps
Yeah, call them niggaz drug barons
Eighty billion worth of sniff gettin lit, ownin Miami
Yo flips got bigger, makin more trails
Set it out of nowhere, I’m coppin the jail, I’m eatin fresh bail
Pa-Blow, the largest nigga involved
The arsenal will have 6300 murders within apartments”

There’s no question that Rae has many dimensions and chapters to his styles. At times he’s as hard as “The Hood” and at other times he’s as smooth as “Ice Cream Pt. 2” At will, Woods goes from telling gangster tales more violent than “Scarface” to being as tragic as “Goodfellas,” all while keeping you firmly focused on the flow. There are only a few flaws to “The Lex Diamond Story,” but they are significant. First is that there are just too many skits on the album. While this may harken back to the “Only Built” days, times have changed and they’re just not as necessary any more, plus they break up the solid vibes Raekwon gets going from song to song. “Wild in Da Club” is a throwaway skit, and for a song with such a crunk name neither the beat nor guests Ultra and Ice Water can tear it up. Speaking of the latter, you can skip over “Robbery” as well. A few more duets with Ghostface would have been illy, and even ONE track with RZA would have been the icing on a top notch cake. Regardless though to any who thought that Raekwon the Chef couldn’t cook it up any more, “The Lex Diamond Story” proves that with or without RZA, he’s still got it locked.