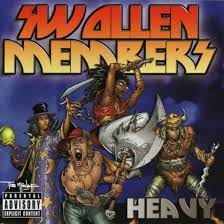 In the highly competitive and often quixotic world of underground and independent hip-hop, some rappers wear a badge of anonymity with pride, as if to say “we’re better than you because we didn’t go mainstream” or “we’re doper as unknowns than all the signed rappers on MTV” and so forth. It’s a false premise of course – whackness or dopeness does not know the boundaries of how many units you sell. Still the Swollen Members have struck a careful “Balance” between the two levels of recognition, and perhaps succeeded beacuse of it. They’re well enough known in their native Canada to have received a Juno Award (equivalent to a Grammy) but still perceived as brethern to underground hip-hop artists from Cannibal Ox to Zion I outside it. Is it beneficial? Artistically speaking, commercially successful artists aresometimes expecting to conform to the lowest common denominator and/or whims of a fickle consumer base. The Swollen Members though have maintained their distinct identity while still pushing units, and as a result have a cult following among rap fans worldwide.

On their fourth full length album “Heavy,” the Members are coming with the confidence of proven winners. Prevail, Mad Child and Moka Only handle the lyricism, while Rob the Viking handles a majority of the production duties. Like the true collective unit they are, nobody plays second fiddle to the other MC’s on the tracks. Take the song “Therapy” for example. It starts out with the nasally effective Mad Child spitting wickedness:

“I’ma pull out my knife or rifle
I’m a polite psycho, it’s a full out cycle
of a trifle life, cops can suck my cock if they don’t like us
I hang around prospects strikers bikers
Cruel in a duel, a Buell fuelled with nitrous
Oxide thoughts fly by like a rock slide
Not a far cry from a glorified barfly
Horrified when you hear this warrior’s war cry
Four out of five dentists recommend that you support Swollen Members
[..] Get it? People get their teeth knocked in”

Then on the second verse, Moka Only is the enforcer of the trio:

“I’m a juggernaut, you’re not – you don’t want it
And you don’t want us to rock your knot
You don’t call us if you got some thoughts
You just call us to rock the spot, demolish and pop your top
So whassup? I don’t do shit to mock you dawg
You doin that by yourself cause you not too hot
Now the fat cats run around and copy each other like CD-R’s
We don’t, cause we be stars
See these scars? They didn’t appear by themselves
on my knuckles cause motherfuckers wouldn’t keep to themselves”

Then on the third, Prevail lives up to his name via his deep voice:

“Well you trippin if you think I’m gonna sit on this couch
And tell this shrink what my deeply rooted problems about
The words out my mouth like acts of vengeance
From the blackest dungeons in a mass abundance
We move together like shadows and figures
We strike when we like, with a mind like the Gravediggaz
Painted pictures and still photography
Movin images, reverse psychology”

The picture becomes complete thanks to Rob the Viking’s beat. It starts out with Halloween-esque piano keys and the sounds of dogs barking, then brings in pounding bass and lighthearted synths that oddly enough make the track MORE menacing. DJ Revolution plays the guest role scratching in cuts on the chorus, and his choice of lines from Jay-Z, Redman, and Mr. Funke (Lords of the Underground) blended together is superb. Rather than playing to the lowest common denominator, Swollen Members play to the HIGHEST, expecting the listener to be elevated by their smart (but not intimidating) lyrics and hard beats.

Swollen Members are all about having fun with hip-hop too. The opener “Block Party” swings hard thanks to a Nucleus beat so fly that Moka Only parapharses Run-D.M.C.: “Dumb rhythm – dumb meaning good; not dumb meaning stupid.” It should come as little surprise then that at the start of Prevail’s second verse when he says “I keep a ton of ’em runnin like mascara” that the sly trio slips in a sample of the Reverend uttering his trademark “Run!” The importance of elements like this in a quality rap album simply cannot be understated. They show that Swollen Members want to take their rap songs farther than the average artist would bother to, and probably couldn’t do even if he did so desire.

It’s all about a quality presentation on “Heavy.” The energetic “Watch This” may have one of the filthiest verses of a lead single in all rap history, but it’s hard to imagine a radio edit properly conveying Mad Child’s arrogance: “Listen bitch, I’m a tough act to follow/suck my dick and here’s a nutsac to swallow.” Damn! You can’t front when he says “I’m proof that raw adrenaline and energy pays” though, it’s a credo the whole trio lives by. Track influences range from the operatic on “Bottom Line,” to claves and congo drums on the Evidence laced banger “Remember the Name,” to outer spacey Bambaataa-like electronics on “Concentrate.” As the album moves from the “Intro” to the hidden bonus track “Sensational Breed” featuring Son Doobie at the end, you’ll be wondering just how 60 minutes could fly by so fast. While the only major guest appearance on the album is Abstract Rude on “Don’t Know Why,” the Members don’t really need any. The song titles themselves describe the Swollen Member experience best: you’ll be feeling the “Heat” of their style “All Night” and the “Bottom Line” is that few groups anywhere in North America or the whole world are as Swollen as these Members.